Difficult contests and rainy weather led to a pair of home losses for the Trapper men’s soccer team on Friday and Saturday. Northwest fell to to Trinidad 2-1 and Otero 4-3. 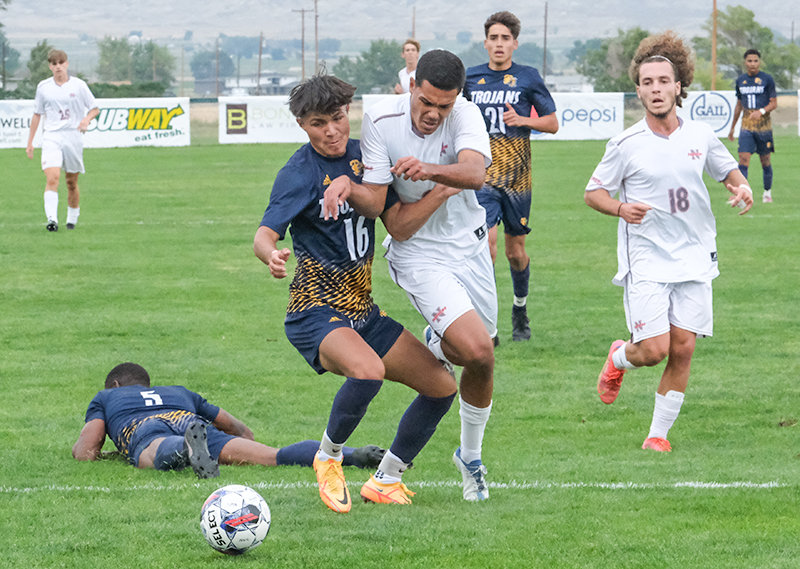 Ricardo Farias da Silva is fouled in the box during the NWC men’s match against Trinidad on Friday. His goal was not enough as the Trappers lost the game late.
Tribune photo by Seth Romsa
Posted Thursday, September 22, 2022 8:05 am
By Seth Romsa

Difficult contests and rainy weather led to a pair of home losses for the Trapper men’s soccer team on Friday and Saturday. Northwest fell to to Trinidad 2-1 and Otero 4-3.

Northwest appeared to get on the front foot when Ricardo Farias da Silva earned a penalty kick 25 minutes into the game.

Penalties have been a killer for the Trappers this season, and that problem continued when the shot sailed over the crossbar to keep the game tied at 0-0.

Trinidad got on the board first after halftime, after a scramble in the box led to a cross in front of goal that was tapped into an empty net.

Northwest appeared to get a lifeline, when another penalty was called on a foul 76 minutes into the game.

Once again, the penalty missed as the Trinidad keeper guessed correctly and tipped the ball out of play.

Fortunately for the Trappers, they did not have to wait long to score.

The ensuing corner found its way onto the head of Farias da Silva, who headed it past the keeper into the back of the net to tie the match at 1-1.

Trinidad pressed hard following the kickoff, and found its way into consecutive corners.

On the second corner, while attempting to clear the ball a Northwest player kicked a Trinidad player giving the Trojans a free kick opportunity just outside the box.

After an injury break, the Trojans hit the free kick into the top right corner to take a 2-1 lead.

Trinidad held off any Northwest challenges, and walked away with the victory.

On Saturday, Northwest was unable to overcome the visitors again with Otero (1-4-1 overall, 1-1 Region IX) coming to town and walking away with a 4-3 victory and extending the Trappers losing streak to four.

The Trappers head out on the road this weekend, heading to Cheyenne to take on Laramie County Community College (2-5 overall, 2-1 Region IX) on Friday at 1 p.m.

The trip continues to Scottsbluff on Saturday, to rematch with Western Nebraska (3-3 overall, 3-0 Region IX) at 1 p.m.

Northwest defeated the Cougars 2-1 in Powell three weeks ago.