Most of her life Jocelyn Sanders has played volleyball after being inspired by her mom at a young age.

Over recent years, Sanders has taken inspiration from her relatives in California who moved … 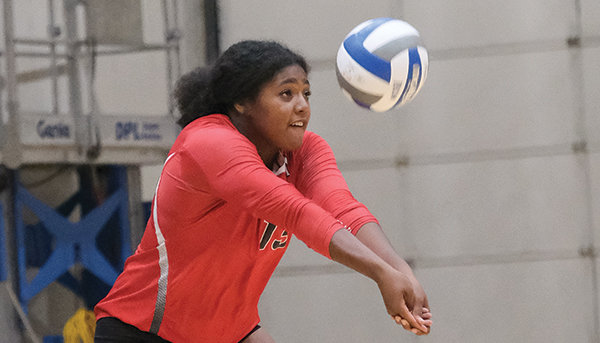 NWC freshman Jocelyn Sanders focuses on a pass during practice on Tuesday. Sanders has been competing off the field in rugby before making her way to Powell last week.
Tribune photo by Seth Romsa
Posted Thursday, August 11, 2022 8:10 am
By Seth Romsa

Most of her life Jocelyn Sanders has played volleyball after being inspired by her mom at a young age.

Over recent years, Sanders has taken inspiration from her relatives in California who moved to the United States from New Zealand — inspiring her to start playing rugby.

“When I went out to live with them for the summer, I had just started practicing rugby with them and got pulled into it,” Sanders said.

That inspiration led Sanders to join the Sac Pal Amazons and compete at the North American Invitational Sevens rugby tournament in Salt Lake City, Utah, on July 22 and 23.

Sanders competed with her team in the U18 division, finishing undefeated over six games and winning three of those games by shutout.

“It was pretty cool to win that, it went by really fast but it was amazing,” Sanders said.

Transitioning into rugby has been a different experience for Sanders after she played volleyball and basketball her entire life.

She said that one of the main differences is the body contact, which has caused more strain on her body compared to the other sports she plays.

After the tournament, Sanders made her way up to Powell. She is currently competing to be a middle blocker on the Trapper roster.

She joins a talented returning sophomore class along with other freshmen for a Trapper volleyball team hoping to continue its climb back to the top of the NJCAA.

“Hopefully we can win it here and bring home a regional championship,” Sanders said.

The Trappers will continue practice throughout the course of this week, and will kick off competition next Friday in Montana.