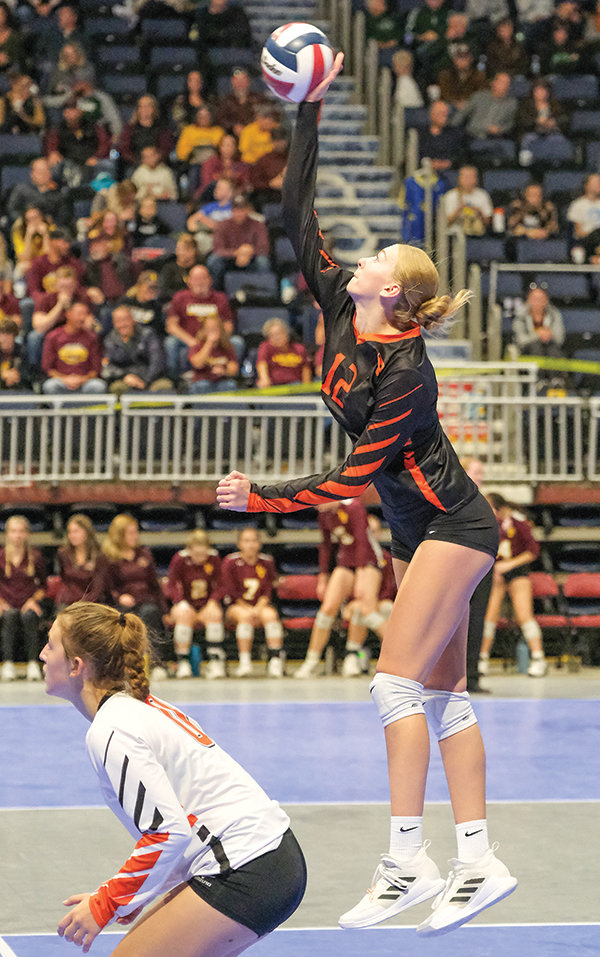 PHS junior Addy Thorington spikes a ball during a match against Mountain View on Nov. 4 at the state tournament in Casper.
Tribune photo by Seth Romsa

Thorington did that and more, earning the recognition of 3A West Player of the Year in addition to a second straight All-State recognition.

“It meant a lot to me to get those titles,” Thorington said. “I was shocked when I was told I got 3A West Player of the Year. I’ve put a lot of time into this sport in and out of season, and it is nice to see that hard work paying off.”

“This is the first time we have been to the state tournament in four years,” Thorington said. “We wouldn’t have gotten this far without everyone’s cooperation and outstanding leadership.”

She said that coach Lesli Spencer helped push the Panthers to be the best they could possibly be.

Another thing that Thorington attributed to the team’s success this year was the increased blocking efficiency as the Panthers had four of the top 20 blockers in the state.

Alongside Thorington on the 3A West All-Conference team this season was a pair of seniors in Gretel Opps and Anna Bartholomew.

Opps was the lead setter for the Panthers, finishing with 596 assists, 174 digs and 42 aces. She also chipped in as an outside hitter and blocker finishing with 72 total blocks and 64 kills.

Bartholomew served as a middle blocker for the Panthers, finishing as the lead blocker on the team with 209 total blocks and 135 kills.

She also contributed in the service game finishing with 39 aces and adding 128 digs for the season.

“Having those girls alongside me meant a lot because I have been playing with them for three years,” Thorington said. “Seeing their hard work getting paid off was super exciting.”

Heading into her senior season Thorington will be without both Opps and Bartholomew.  She said she intends to continue improving her vertical, decreasing her errors, while also being the best leader and teammate she can be.