A longtime Thermopolis trucking company bought out an even older Powell trucking company in March. On Monday, Ryan Bros. Trucking installed a 15,000 gallon fuel tank on the property of what was … 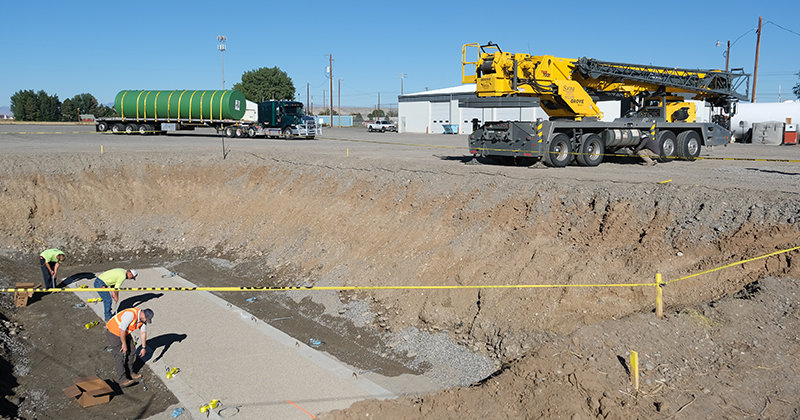 Thermopolis based Ryan Bros. Trucking purchased Dick Jones Trucking in March. Recently they installed a new fuel tank underground to service their fleet of vehicles that will operate out of Powell.
Tribune photo by Zac Taylor
Posted Thursday, October 6, 2022 8:15 am
By Zac Taylor

A longtime Thermopolis trucking company bought out an even older Powell trucking company in March. On Monday, Ryan Bros. Trucking installed a 15,000 gallon fuel tank on the property of what was formerly Dick Jones Trucking, a Powell institution going back nearly 90 years.

“It was a nice addition to what we do,” Ryan Bros. co-owner Sean Ryan said. “A little more of what we are currently doing.”

Ryan Bros. Trucking, based out of Thermopolis, had already installed similar fuel tanks at its locations in Thermopolis and Rawlins. The company mainly hauls liquid asphalt for construction crews and runs roughly 70 trucks.

“We can go through that much fuel in a week if it’s busy,” Matt Ryan said.

The company’s drivers will have to enter a code to access the gas.

Swing Trucking, of Worland, provided a large crane to pick up and lower the tank into a prepared foundation in a hole. Tom Ryan said the tank, metal wrapped in a plastic exterior to prevent spillage leaking out, would also be tied down, as per DEQ regulations, to prevent it floating to the surface.

Ryan Bros. Trucking began operations in 1958. It’s now owned by Tom Ryan, son of one of the two brothers who founded the business, as well as brothers Sean and Matt Ryan, their uncle Bob Ryan and former Powell resident Quinton Hetzel.

Sean Ryan said early on his company had leased Dick Jones Trucking in the 1980s when the Thermopolis company began hauling liquid asphalt, still its main job along with hauling propane and crude oil, driving flatbeds and hauling livestock.

Dick Jones Trucking began in 1935. The granddaughter of the founder, LeeAnne Kindred, is still working in the Powell office alongside dispatcher Randy Lieser, mechanics and drivers.