TerraPower, Bill Gates’ nuclear power company, announced last week that it has chosen Kemmerer as its preferred site for a planned nuclear reactor.

The project, announced in June, will … 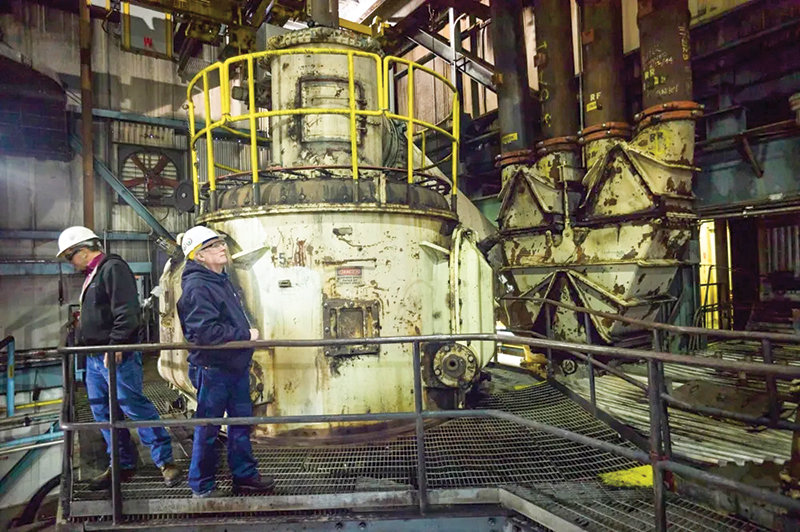 TerraPower, Bill Gates’ nuclear power company, announced last week that it has chosen Kemmerer as its preferred site for a planned nuclear reactor.

The project, announced in June, will be the first of several Natrium reactors the company plans to build near retiring coal-fired power plants within the next decade.

The partnership between the state of Wyoming, TerraPower, PacifiCorp’s Rocky Mountain Power and the U.S. Department of Energy is a bid to add good-paying jobs to Wyoming’s economy and elsewhere while triggering a shift away from coal-powered energy.

The Natrium plant is expected to create about 2,000 construction jobs at its peak and employ about 250 people for day-to-day operations.

A news release said the company had selected the location near the retiring coal-fired Naughton Power Plant “following an extensive evaluation process and meetings with community members and leaders.”

Selection criteria included community support, physical characteristics of the site, access to existing infrastructure, the needs of the grid and the site’s ability to obtain a license from the federal Nuclear Regulatory Commission.

The company also considered the date of retirement of existing coal-fired plants.

The Naughton Power Plant’s two remaining coal-fired units are scheduled to retire in 2025.

“On behalf of Kemmerer and surrounding communities, we are pleased and excited to host the Natrium demonstration project. This is great for Kemmerer and great for Wyoming,” Kemmerer Mayor Bill Thek said in TerraPower’s news release.

Sites in Gillette, Glenrock and Rock Springs were also considered.

Chris Levesque, TerraPower President and CEO, said during a Tuesday afternoon media call that community support in each of these cities was “tremendous.”

Wyoming’s planned reactor is meant to demonstrate the viability of Natrium, which the DOE calls “the future of advanced nuclear reactor technology.”

While most nuclear plants currently operating in the U.S. were built in the 1960s and ‘70s, Natrium’s sodium-cooled reactors are an improvement in terms of safety, Levesque said.

Because of the size of the project, there is ample opportunity for Wyoming vendors to benefit from it, he said. He added that there had been conversations between TerraPower, the University of Wyoming and community colleges in the state about creating and supporting training and academic programs to promote the state’s nuclear energy industry.

“I’ve even spoken with the governor about helping Wyoming prepare for their energy transition and making Wyoming the hub in advanced nuclear technology,” he said.

Half of the cost of the reactor will be provided by a grant from the DOE, according to Levesque.

“Just yesterday, President Biden signed the bipartisan infrastructure deal, and today DOE is already putting it to work with more than $1.5 billion heading to Wyoming,” Secretary of Energy Jennifer Granholm said in TerraPower’s news release. “The energy communities that have powered us for generations have real opportunities to power our clean energy future through projects just like this one, that provide good-paying jobs and usher in the next wave of nuclear technologies.”

The seven-year project will begin with a “very careful” design and approval process, meaning nothing will be built until 2024, when the company expects to receive its construction permit from the Nuclear Regulatory Commission.

Levesque described a push by Congress and the federal government toward “renewed leadership in nuclear energy” as a bipartisan effort to compete with Russia and China.

In a statement following the announcement, U.S. Sen. Cynthia Lummis, R-Wyo., said: “Wyoming powers America, and I’m so excited for the way that advanced nuclear energy production is going to play a role in our state’s energy sector and economy for years to come. TerraPower and PacifiCorp’s decision to build their new Natrium reactor in Kemmerer is a huge boon, not only to Kemmerer, but to Wyoming’s and America’s future energy independence. I look forward to watching this plant come to fruition, and am proud to support Wyoming’s continued place as the number one net energy exporter in the nation.”

The first plant always costs more to build, Levesque said, and TerraPower won’t make money on the first plant. However, the company hopes to build many more Natrium reactors across the country and around the world.

Levesque said the company expects to use the same workforce as is currently employed at the Kemmerer coal plant. He said TerraPower will be able to retrain the operators through a simulator before the nuclear plant is even constructed.

“Operating a coal plant is very high-tech, and we think those workers are fully ready to operate Natrium,” Levesque said.

The reactor planned for Kemmerer is expected to produce 60 years worth of energy and operate efficiently alongside wind and solar operations.

While there are no solid plans for further construction of Natrium plants in the state, Levesque said TerraPower “would love to” build future reactors in the other three cities that were considered.