Nearly 100 years ago, the infant sugar beet industry in Wyoming counted heavily on Mexican-Americans and native Mexicans to provide the field labor that made the crop work for growers and sugar … 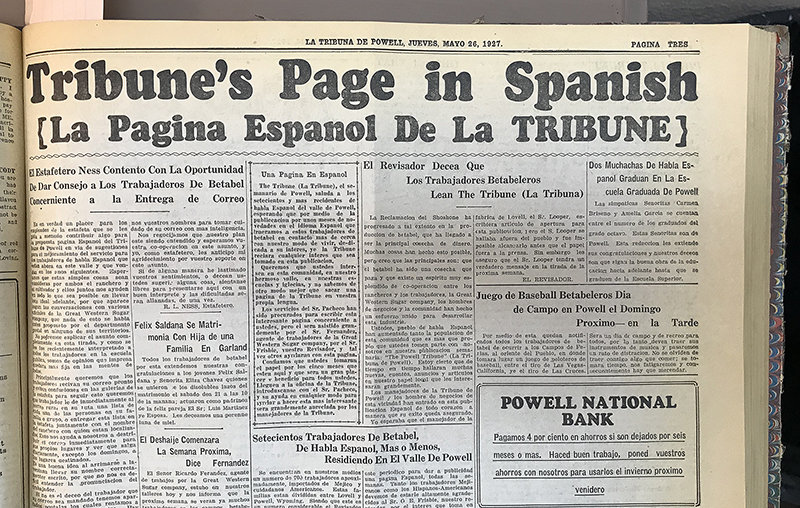 Nearly 100 years ago, the infant sugar beet industry in Wyoming counted heavily on Mexican-Americans and native Mexicans to provide the field labor that made the crop work for growers and sugar company alike. In this area, that was the Great Western Sugar Company, predecessor to today’s grower-owned Western Sugar Cooperative.

Field workers were key to the crop’s success in those days, and many of the laborers recruited by GW in the 1920s were either Mexican Nationals or Mexican-Americans from California, Texas and New Mexico. They were for the most part Spanish-speaking only and could understand English imperfectly or not at all. GW went to great lengths to bridge the language gap and appeal to the community to make laborers feel welcome.

One of the instruments of outreach to the Spanish-speaking involved this newspaper. The American Heritage Center at the University of Wyoming informs us, as well as others, about how the sugar company utilized the Powell Tribune to address workers in their native tongue.

There were an estimated 700 Spanish-speaking workers and family members residing in the Shoshone Valley at the time in 1927.

Great Western Sugar went to the Tribune and negotiated publication of an entire page in Spanish once a week for five months, from late May in 1927 through late October. This covered roughly the period from planting of the sugar beet crop through harvest. The feature was called La Pagina Español de la Tribune, or “Spanish Page.”

The sugar company introduced La Pagina Español in the first issue with this declaration to workers: “We want you to be interested in this community, in our beautiful valley, in our schools and churches, and we know of no better way than to take a page out in the Tribune in your language.”

All of the stories and advertisements for Powell merchants were printed in Spanish. Sugar company personnel wrote the articles, which often included news on the beet season and harvest, but also included community news such as marriage and death announcements, a recipes section and sports news.

The sugar company also sponsored dances and picnics for the Spanish-speaking population. The expressed objective was to encourage laborers to become permanent residents, thus retaining the labor force for subsequent growing seasons. There was also the belief that treating field workers with kindness and patience favorably influenced job performance.

La Pagina Español appeared only in 1927. R.T. Baird was publisher of the Powell Tribune at the time.

Through the years, beet growing practices changed dramatically, and sugar beet field labor faded with the times. Some of the early migrant families did become permanent residents and have blended with generations of friends, neighbors and classmates in the building of a community.

This is National Hispanic Heritage Month, celebrated Sept. 15 to Oct. 15. We commend the American Heritage Center for illuminating this look back at Powell and its Hispanic heritage in its first 20 years.

All editions of the Powell Tribune that contain La Pagina Español can be viewed in full, thanks to the Wyoming Newspaper Project at wyomingnewspapers.org

NWC fans, athletes and coaches did well to stay calm in tense situation