It’s always about the weather.

And this year was no different in Western Sugar Cooperative’s Lovell Factory District. The fall harvest was delayed almost two weeks by a crop that … 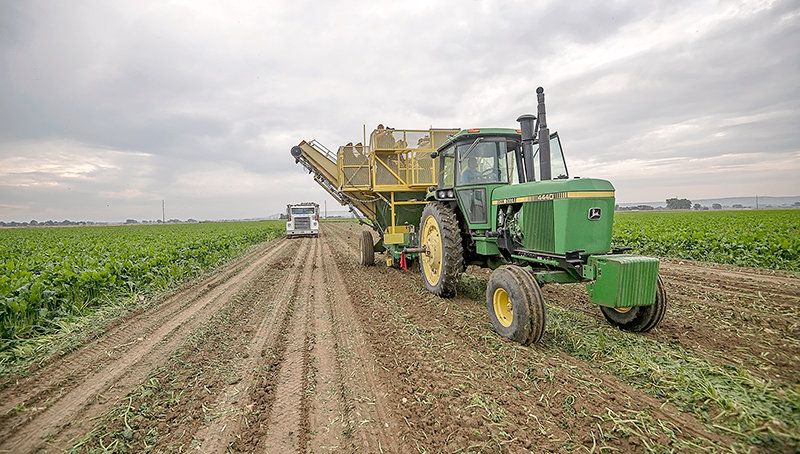 It’s always about the weather.

And this year was no different in Western Sugar Cooperative’s Lovell Factory District. The fall harvest was delayed almost two weeks by a crop that needed growing time. As a result, the “early” dig was not so early, as receiving stations across the district didn’t open until Monday, Sept. 19.

A cold spring got the crop off to a slow start, and it never caught up. Sampling showed  the crop was a week to two weeks behind, said Ric Rodriguez, Heart Mountain grower and Western Sugar board member.

“The delay gives the area beets “a little more chance to grow,” he said.

It’s turned out to be a positive before.

“The last year that we were this far behind was 2011,” Rodriguez said. “That year we ended up with a record crop. It’s Mother Nature giving you what you get,” he concluded.

The ideal conditions to bring the crop to a favorable finish would be cooler temperatures with daytime highs in the 70s, he said.

“We don’t want a freeze, but cooler overnight temperatures would help put on sugar,” he said.

Two weeks of scheduled deliveries from growers across the district support the processing campaign at the Lovell factory during the early period. The factory started operations on Sept. 21.

“Then we need three weeks to get ‘em done if all goes well,” said Rodriguez. “Again, we’re counting on the weather. It takes on average three to four weeks to finish the regular harvest.”

Latest field sampling revealed the  2022 crop in the ground was lagging what had been projected earlier. But with the delayed start to the harvest, “we hope we can do better than that,” Rodriguez said.

One thing that is favorable for growers going into harvest is the selling price of sugar.

“Commodity prices are up across the board,” Rodriguez noted.

And that’s a blessing in a year when production costs have soared.

“Our gas and diesel fuel prices have doubled. Our fertilizer prices tripled, before coming down a little.  And labor costs are way up. Even with paying more, we’re having a hard time finding labor,” Rodriguez said. “It’s that way across the country.”

“If you have any kind of wrecks, you’re in trouble,” he added. “Net income is going to be less. We’ve got to have the yields.”

Western Sugar’s Lovell factory is in good shape going into the slicing campaign and should perform well, Rodriguez said.

“Lovell ran really well last year, and the processing wrapped up early. We had an extra month to work on the factory,” he added.

Planted sugar beets are down close to 13,000 acres in the Lovell factory district in 2022. Once again, Western Sugar growers in the Bridger, Montana, area will deliver beets to the Lovell plant for processing.

Elsewhere in the four-state Western Sugar Cooperative region, Montana growers are reportedly having a good year and harvesting beets before mid-September. Over the course of a growing season, Colorado and Nebraska beet growers were hurt by a combination of freezing temperatures, hail and wind that blew out acreage.

Western Sugar Cooperative conducts tests of different seed varieties on two test plots in the Lovell Factory District — one north of Powell on Road 8 and one in the Deaver area. Harvest of samples from the test plots was already underway Sept. 14 before digging operations by contracted growers was set to commence Sept. 19.

Leah Wimmer, agriculturist with the sugar company, said “the beets we got were looking good” on the north Powell test plot.