Biologists with the Interagency Grizzly Bear Study Team began field captures of grizzly bears Tuesday and plan to continue through the end of October.

Officials with the U.S. Geological Survey, in … 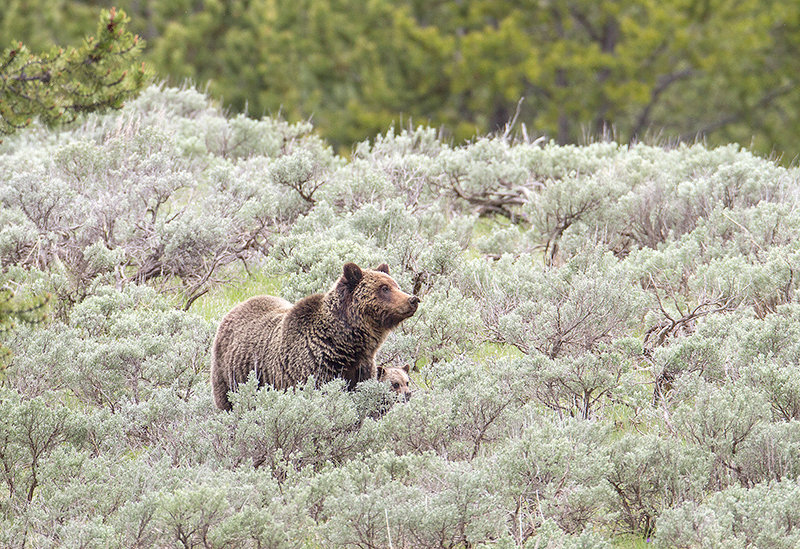 A grizzly sow and her cub of the year move through the brush at Yellowstone National Park. Several cubs were victims of infanticide — killed by other bears — in view of visitors this year, including one that forced park officials to euthanize the cub.
Photo courtesy NPS
Posted Thursday, August 11, 2022 8:25 am
By Mark Davis

Biologists with the Interagency Grizzly Bear Study Team began field captures of grizzly bears Tuesday and plan to continue through the end of October.

Officials with the U.S. Geological Survey, in conjunction with Yellowstone National Park, will be baiting the areas with roadkill deer and elk, marking the areas well with brightly colored signs to warn those traveling through the areas of the possible danger.

“It is critical that all members of the public heed these signs,” the park’s Public Affairs Office said in a press release.

It’s part of the team’s efforts to monitor the species’ population in the Greater Yellowstone Ecosystem required under the Endangered Species Act.

Potential capture sites are baited with the roadkill using culvert (barrel) traps or occasionally foot snares. Once captured, bears are handled with strict safety and animal care protocols developed by the team.

The team began radio collaring grizzly bears in the Greater Yellowstone Ecosystem (GYE) in 1975.  Since then, they have radio-monitored close to 900 individuals for varying durations, but typically for two to three years.  More than 100 individual bears have been monitored for more than five different years.

“By observing radio-collared bears, we document age of first reproduction, average litter size, cub and yearling survival, how often a female produces a litter, and causes of mortality,” the team reported in their most recent annual report.

The collected data allows scientists to estimate survival among different sex and age classes of bears. Collectively, this is referred to as “known-fate monitoring.”  In conjunction with other estimates (i.e., number of females with cubs, annual mortality), this information is used to estimate population size and evaluate sustainable mortality. Location information obtained from collared bears also provides reliable data that helps resource managers focus their activities toward landscape issues that impact grizzly bears in the ecosystem.

Monitoring of grizzly bear distribution and other activities are vital to ongoing recovery of grizzly bears in the Greater Yellowstone Ecosystem, park officials said.

In 2021, the U.S. Fish and Wildlife Service recommended that grizzly bears in the lower 48 states remain protected under the Endangered Species Act after a five-year status review. The news was met with immediate complaints from officials in Wyoming and western states, who have been working to gain management of the species, which they say has been fully recovered for years.

“The grizzly bear in the lower-48 states is not currently in danger of extinction throughout all of its range, but is likely to become so in the foreseeable future,” the report concluded.

Since dropping to a low of around 136 bears in 1975, new estimates by the study team have concluded that more than 1,000 grizzlies now live inside the species’ primary conservation area in and around Yellowstone National Park known as the Demographic Monitoring Area (DMA).

There are no known estimates on the population of grizzly bears outside the DMA.