Twenty-five high school students from across Wyoming worked in teams to determine whether planets near different-colored stars could actually be habitable. To help make that determination, the … 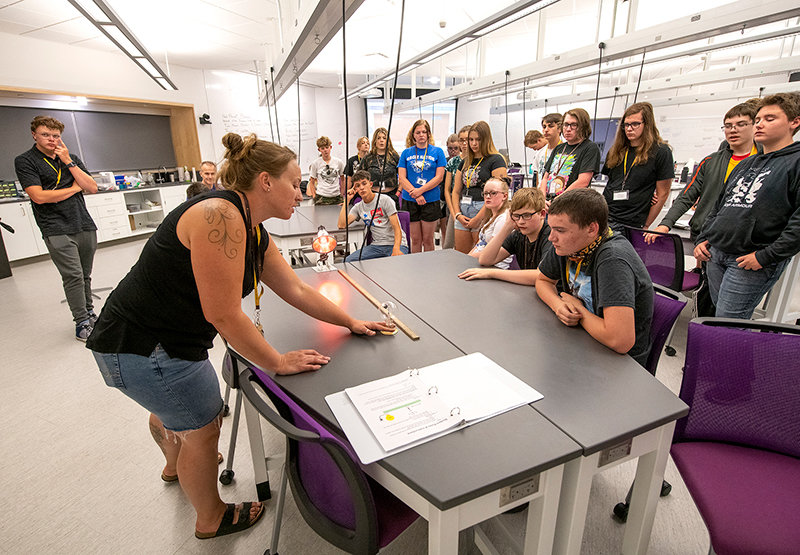 High school students from Wyoming and Colorado participate in the Teton STEM Academy during an activity on UW’s campus in July. Chelsea Lund (left), a teacher at Black Butte High School in Rock Springs, led a ‘Mars Base Design’ lab in which students used radiometers to determine whether planets near stars could be classified as habitable zones.
Photo courtesy University of Wyoming 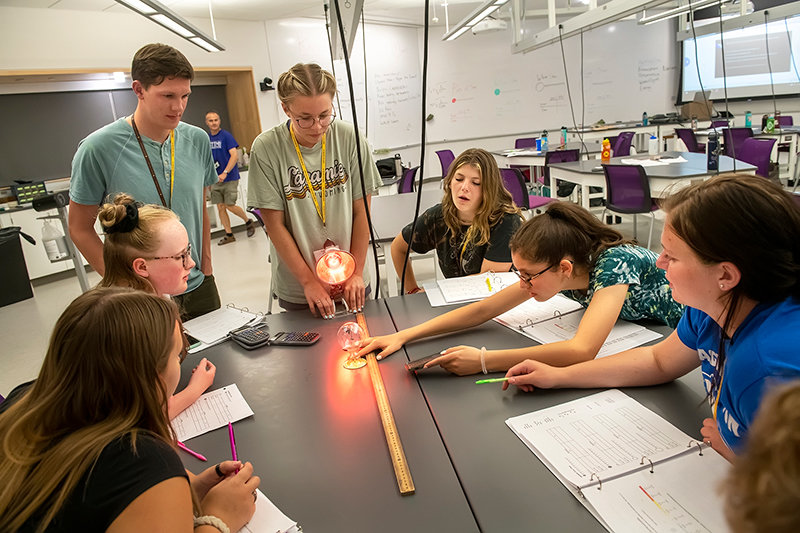 Haley Sessions (middle, standing), a UW alumna from Meeteetse and a Teton STEM Academy counselor, leads a group of students through an exercise using a radiometer to measure the inner and outer limits of a planet’s distance to a star.
Photo courtesy University of Wyoming
Previous Next
Posted Tuesday, August 17, 2021 8:05 am

Twenty-five high school students from across Wyoming worked in teams to determine whether planets near different-colored stars could actually be habitable. To help make that determination, the students — including Isabelle Lobingier from Powell — participated in an experiment using radiometers, which measure light, to record the outer and inner limits of habitability around different types of stars.

The activity was part of the Teton STEM Academy on the University of Wyoming campus in July. The nine-day event offered hands-on activities in the interdisciplinary sciences, including life sciences, physical sciences, engineering and math, all covered under a general theme of planning a journey to Mars.

“We want these kids to see scientists as people who solve important problems,” said Chip Kobulnicky, a professor in the UW Department of Physics and Astronomy, and co-director of the Teton STEM Academy. “We’ve relied on scientists to solve COVID problems or climate disasters.”

Chelsea Lund, a teacher at Black Butte High School in Rock Springs, led a “Mars Base Design” lab last month in UW’s Enzi STEM Facility. During the exercise, the students used radiometers to measure light from stars to determine whether planets near the stars could be classified as habitable zones.

“The habitable zone also is called the ‘Goldilocks Zone,’” Lund said. “Not too hot and not too cold.”

Diego Diaz, of Casper, surmised that Europa, one of Jupiter’s four large Galilean moons, was a good candidate for hosting life. He referenced the moon has an ocean and volcanic activity under the water body.

Campers, entering ninth through 11th grades this fall, were chosen based on demonstrated interest and academic potential in math, science, astronomy and space. The camp also included trips to the Snowy Range near Laramie and to the large research telescope at the Wyoming Infrared Observatory on Jelm Mountain.

Lobingier, who will be a freshman this fall at Powell High School, said she was excited about the hike, where students did soil and water testing.

In 2018, an anonymous donor from Teton County made a three-year, $150,000 commitment to the Teton STEM Academy, formerly known as the ExxonMobil Bernard Harris Summer Science Camp that ran from 2010-15 on UW’s campus before funding dried up.

“Inspiring young people like this is the most important thing I do all year,” Kobulnicky said. “Camps like this show good results for recruiting to UW or other colleges. These students have a distinct interest in the STEM fields, which we hope to cultivate.”