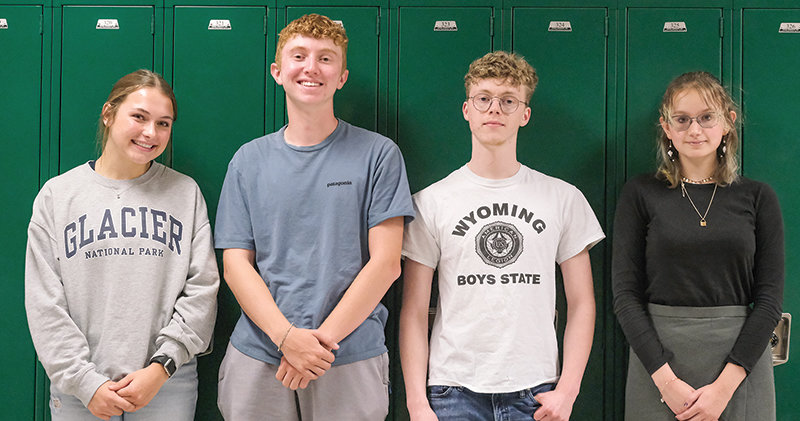 Powell High School was notified the students had received the awards on Aug. 30.

The PSAT is a practice exam for the SAT covering reading, writing, language and math, according to the College Board website. The National Recognition Program’s goal is to give academic honors to underrepresented students.

Spomer said in order to qualify for applications they had to score within the top 10% nationally of their qualifying underrepresented group. If they held qualifying scores they were presented the opportunity to apply.

Hicswa said that he received an email notifying him that he qualified for the award; he then went through several steps and selected rural and small towns as his identification. The high school students filled their applications out over the summer and heard back from the College Board in September.

Spomer, Hicswa and Cearlock, who are all in the midst of their college search, appreciate receiving the national recognition and the doors it may open.

“For all of us, we take the test, but don’t really think much about it, because it doesn’t do a whole lot,” Hicswa said. “So adding on to the scores we got, which are all pretty good, it means quite a bit just to get that extra little bit of recognition.”

Cearlock said he is unsure what doors the award could open for scholarships but acknowledges the national recognition for rural students that comes with the award.

“Even something that’s given more broadly like this, the top 10%, it’s still a bit of a standardized unit of saying, ‘for where this guy is coming from he did well,’” Cearlock said.

Spomer said while it’s nice to see the PSAT scores students normally don’t receive much else other than the knowledge of how they did.

“Just to get that validation back that you are in the 10% and that it can open some doors for you in the future, it’s nice and I’m excited to see what’s going to come out of it,” Spomer said.

Gomez had researched the statistics and knew she was in the 10% before being emailed by the College Board.

“It’s a little bit of validation that I’m doing all right, because I found myself comparing my PSAT scores to people,” Gomez said. “It’s like, ‘oh, my gosh, they did better than me.’ But I got the award. So I guess that means I’m doing fine.”