A slow start to the season has been met with a stronger response, as the Trapper women won their fourth game in a row to push their season record to 8-8 last weekend. NWC used a strong second half to … 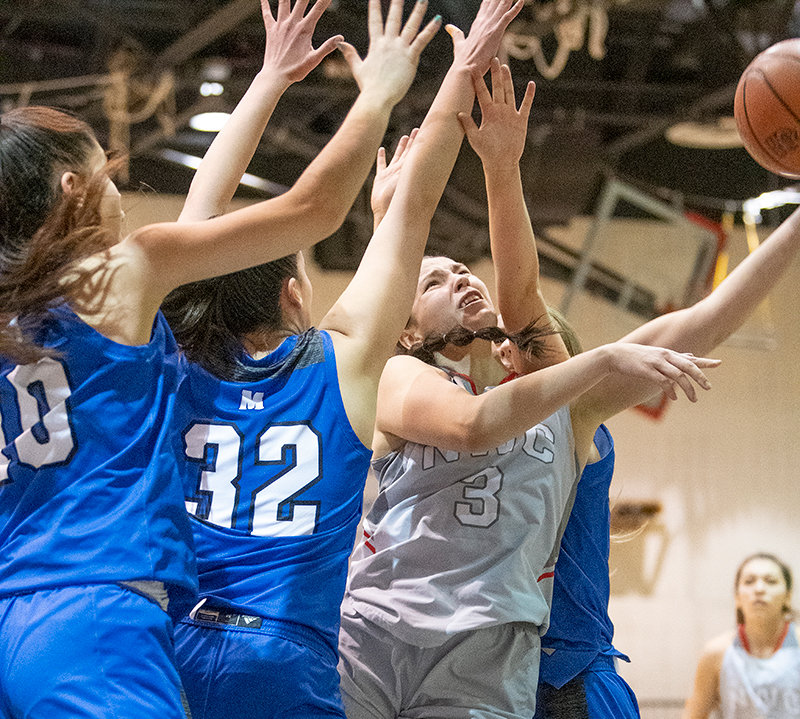 NWC sophomore Celina Tress puts up a shot with her left hand as she is swarmed by Pioneer defenders during their contest on Saturday. Tress and the Trappers’ strong second half push propelled them to a fourth straight victory.
Tribune photo by Carla Wensky
Posted Thursday, January 20, 2022 8:20 am
By Seth Romsa

A slow start to the season has been met with a stronger response, as the Trapper women won their fourth game in a row to push their season record to 8-8 last weekend. NWC used a strong second half to defeat Miles Community College (MCC) at home 69-48 on Saturday.

After nearly a month away from action, Northwest came out slow against the Pioneers (3-16), trailing 6-0 after the first two minutes of action.

“I definitely think that we started out slow because of a lack of games and a lack of practice,” Trapper head coach Lauren Davis said.

Over the next seven minutes, the Trappers answered the early push by MCC, going on a 12-0 run of their own behind strong play from freshmen Nayeli Acosta and Darla Hernandez.

A buzzer-beating jumper by Hernandez from the free throw line put the Trappers up 14-10 at the end of the first quarter.

Most of the second quarter belonged to the Pioneers early on as they outscored the Trappers 18-9 over the first seven minutes. But the Trappers again responded to finish the half on a 12-0 run; a fast break started by a block from freshman Brenna Rouane led to a runout by sophomore Kierra Cutright. She found a trailing Rouane, who knocked down another buzzer beater for a 35-28 halftime lead.

“We talked about effort and intensity at halftime,” Davis said. “We kind of had a gut check moment and I think they took to it and came out the way they were supposed to.”

The Trappers came out fast in the second half, as the energy picked up on both ends of the floor and Northwest took a 51-33 lead with 2:56 remaining in the third quarter.

Northwest continued to apply the pressure and, behind their strong second half effort, ran away with the contest. About halfway through the fourth quarter, the Trappers led by as much as 67-42.

The final score of 69-48 was the Trappers’ second victory over the Pioneers, as they defeated MCC 69-46 in Miles City back on Nov. 18.

Much of the scoring outburst came from Rouane, who put up a season high 19 points. She was followed by Hernandez with 18 points and Cutright, who finished with 16. Cutright nearly put up a 5x5 game, as she also finished with 14 rebounds, six assists, five steals and three blocks.

“Kierra [Cutright] is our ultimate hype girl and our ultimate leader on the floor,” Davis said. “When she is putting up numbers like that everyone really feeds off her.”

Hernandez added 11 rebounds to get her second double-double of the season.

The Trappers were set to start conference play on Wednesday night, as they hit the road to face No. 21-ranked Casper College (15-4) to begin their road to the Region IX tournament.

Northwest is set to return home Saturday to take on Eastern Wyoming College in their Region IX home opener at 2 p.m.