Powell’s speech and debate coach has been honored for her work in molding top high school speakers.

Nicole Maier Reitz, who has coached speech and debate at Powell High School for five … 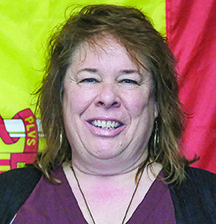 Powell’s speech and debate coach has been honored for her work in molding top high school speakers.

Nicole Maier Reitz, who has coached speech and debate at Powell High School for five years and is the coach to Powell High School’s first All American competitor, was recently awarded the Donus D. Roberts Coaching Excellence Award by the National Speech and Debate Association.

“So your success is based on how well the team is doing. Which, the first year we had a smaller team, and then we’ve gradually just been getting bigger and better,” Maier Reitz said. “So I mean, the award really is a reflection on how hard the kids are working.”

In order to be eligible for the award coaches must acquire 10,000 points. These points are earned for every merit point a student receives in competition, leadership or service. The association sees these earned points as representative of “dedicated coaching and hours of practice, revision and growth for students.”

Maier Reitz added there is a lot done by the students behind the scenes during the six month season including hours of individual practice. She said the award is a recognition of the entire team, which went from being lower on the points scale to being considered a strength team. This means the team is recognized by the National Speech and Debate Association as a contender for the award of the strongest team in the division.

For Maier Reitz, the growth in competitions and team ranking is excellent news but her favorite part of coaching is witnessing her students’ growth inside and outside of competition.

“For me, personally, I just love working with the kids and watching how far they’ve come. I think back to where some of these students were, especially our varsity students and I see that with the novices right now, because it’s all so new,” she said.

The next award Maier Reitz’s could receive is the diamond award, which is awarded to coaches who accumulate 15,000 points. The award is given to coaches during the national tournament. Coaches can receive an additional diamond award every five years. Following three diamond awards, coaches are eligible for induction into the hall of fame.