Bryan Skoric pulled out a strong victory over Leda Pojman for Park County Attorney, winning the race by just shy of 3,000 votes in the most expensive county courthouse race. 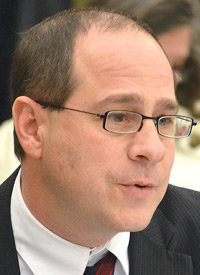 Bryan Skoric pulled out a strong victory over Leda Pojman for Park County Attorney, winning the race by just shy of 3,000 votes in the most expensive county courthouse race.

Skoric won 6,960 votes to 3,991 votes in his first contested race in his 19 years in the position. Pojman spent more than $40,000 in her challenge, outspending Skoric by more than a 3 to 1 margin. The incumbent financed the race out of his own checking account, spending about $12,800 in the primary win. There are no known Democrats or Independents and he is more than likely to run unopposed in the general election.

Skoric said it was his goal to “keep our county Park County.”

“With all the outside money coming in for my opponent, it was certainly something I didn’t like to see. Did that make a difference on the vote? I don’t know that it did.”

Pojman financed her campaign with about 50% coming from out-of-county donations, including large donations coming in from out of the state.

“I didn’t want to give the impression that I was taking anything for granted,” Skoric said of the financial challenge. “I appreciate every single vote that I received. And yeah, you have to spend a little money just to put your name out there. And unfortunately, if you’re doing it all yourself, it gets a little expensive.”

Pojman was gracious in her defeat. “I want to thank Park County residents for all of their support these past few months.  I appreciate each and every one of you,” she said in her concession late Tuesday night.

“I extend my congratulations to the incumbent. It is my hope that long-time issues have been brought to light and that you, as residents, will keep the conversations going,” she said.

Skoric said he appreciates the continued support of county residents. “I’ll strive as a public servant to continue to do the job that I’ve been doing for the last 19 years — to make sure we have safe communities and represent the county and all of its civil welfare.”

Skoric won every precinct in his victory, including large margins in Powell precincts.