An opportunity of a lifetime that the Pannell sisters used to dream of will become a reality this fall, when Kim and Megan Pannell take to the court for the NWC Trapper volleyball team. 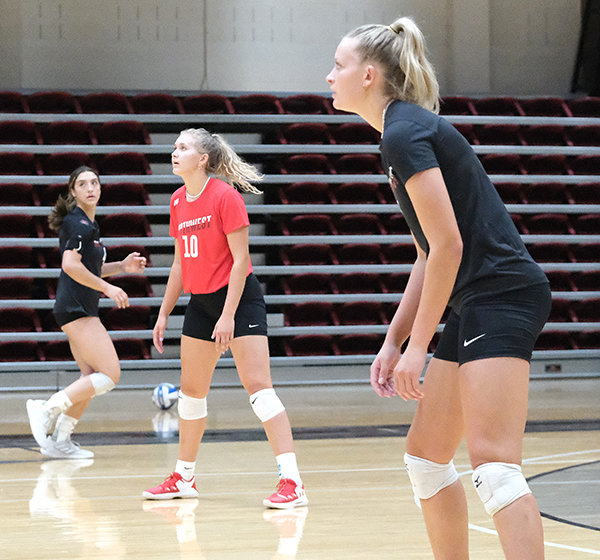 Megan Pannell (red) and Kim Pannell (right) anticipate a ball during practice on Aug. 9. The Pannell sisters made their way to Powell and will compete together for the Trappers this fall.
Tribune photo by Seth Romsa 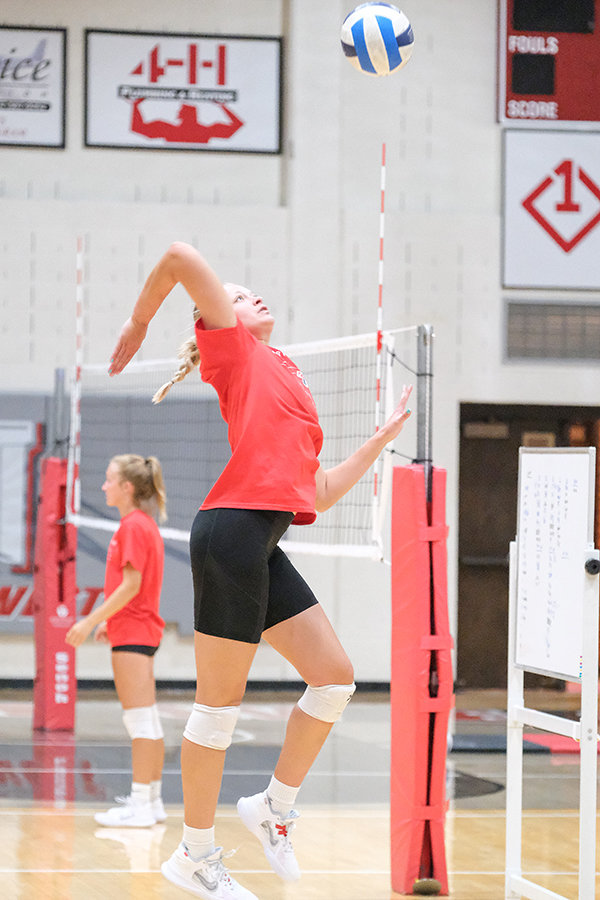 Kim Pannell goes up for a spike during drills after the Trappers battled through a difficult first week of camp.
Tribune photo by Seth Romsa
Previous Next
Posted Tuesday, August 16, 2022 8:00 am
By Seth Romsa

An opportunity of a lifetime that the Pannell sisters used to dream of will become a reality this fall, when Kim and Megan Pannell take to the court for the NWC Trapper volleyball team.

Sisters playing together is not unheard of, but sisters two grades apart playing at the junior college level is hard to come by as athletes are afforded two competitive years at that level.

Kim Pannell was part of the initial signings for the Trappers in November 2021, after coach Scott Keister reached out to her about joining the program.

“I wanted to go to a small town, and he actually reached out to me first,” she said.

Kim said she was initially not interested in attending Northwest, but after she visited she said that hanging out with the team was such a strong bonding experience that she decided to sign with the Trappers.

After Kim signed with Northwest, Megan kind of decided in the spur of the moment that she wanted to try and transfer to the Trappers.

“After I was granted a COVID year after my freshman year it became possible,” Megan said. “I reached out to Scott and he recruited me to come in for one year.”

This will be the second time that the pair gets to play together, after they both played on the same high school team in Idaho for a short amount of time.

Kim said the transition has been smooth for everybody due to the team being together all the time, but her sister being on campus alongside her has also helped the move to Powell.

“One thing that made it easier for me was the girls and Scott especially,” Megan said. “They are awesome and I love all of them. Even though the first week was awful they made it worth it to get through it and make memories together.”

Heading into the season the pair is looking forward to playing together and hoping to lead the Trappers back to the national championships.

The Pannells hope to help boost up the team’s confidence throughout the season, while maintaining a strong friendship with the group to help keep the team’s chemistry high.