A red card sent the Northwest women’s soccer team down to 10 players on Saturday, but the Trappers prevailed in extra time to defeat Central Wyoming 3-2.

Looking for their second win of the … 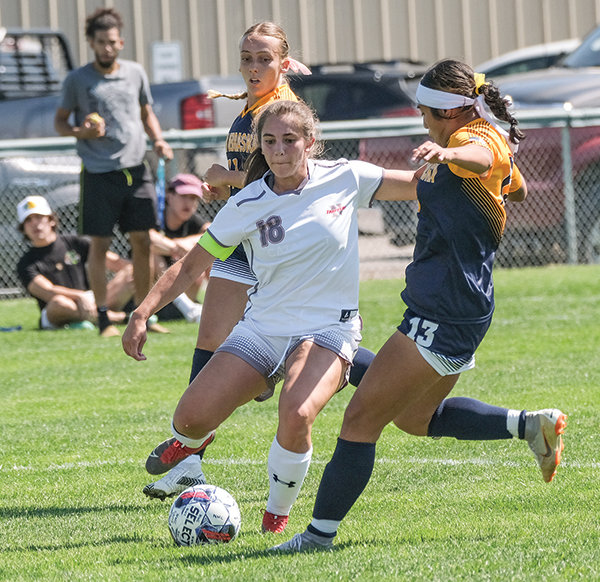 Peyton Roswadovski drives in to take a shot against Western Nebraska earlier in the season. Roswadovski netted her third goal of the season on Saturday to help the Trappers come back for a 3-2 victory in Riverton.
Tribune photo by Seth Romsa
Posted Thursday, October 6, 2022 8:10 am
By Seth Romsa

A red card sent the Northwest women’s soccer team down to 10 players on Saturday, but the Trappers prevailed in extra time to defeat Central Wyoming 3-2.

Looking for their second win of the season, the Trappers (2-10 overall, 1-5 Region IX) trailed early in the match, when Central (2-8-1 overall, 0-5 Region IX) scored two goals to put the hosts ahead.

Conditions through the wind and rain got worse, when disaster struck after center back Aspen Newland received a red card in the 65th minute, giving Central Wyoming all the momentum with 25 minutes on the board.

“It was tough for us,” coach Rob Hill said. “I thought that we played down, we did not execute passes and play as intelligently as we have been.”

Northwest got on the board when midfielder Zoey Bonner found the back of the net after a strong dribbling display — cutting the lead to 2-1 with her fifth goal of the season.

Northwest tied up the contest late when Peyton Roswadovski dribbled past the Rustler defense, and was dragged down in the box to earn a penalty.

She converted the goal, her third of the season.

Tired, wet and exhausted from the conditions, the game went into extra time where the Trappers dug down deep to try and find a winner.

Northwest got it when forward Autumn Wilson found the back of the net with three minutes left to give the Trappers a 3-2 victory.

“The positive was that we were 2-0, battled back and got the win,” Hill said. “It would have been much easier to think about quitting and getting on the bus, but we battled back.”

Northwest will be without Newland in the defense when the team heads to Casper this weekend to take on Casper College (7-4-1 overall, 4-1-1 Region IX) on Saturday at 11 a.m.

“We have a tough game against Casper on Saturday,” Hill said. “I think they will take the lessons from Central into this matchup.”