A hot start to the season for the seventh grade Cubs football team was followed by a mix of wins and losses, en route to a 4-3 overall record and a 3-2 conference record for Powell Middle … 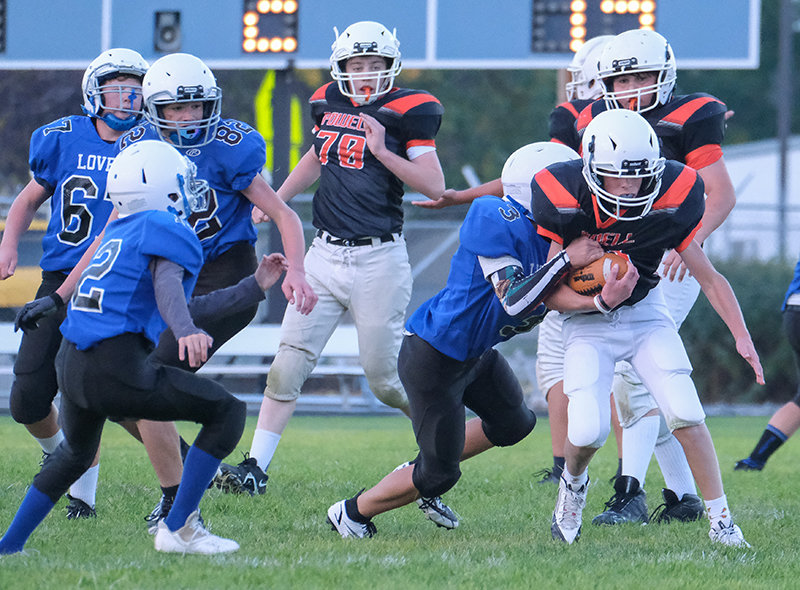 Keaton Bennett breaks through a Lovell tackle during the Cubs game in October. The seventh grade team finished 4-3 overall on the season behind the eventual champions from Lovell.
Tribune photo by Seth Romsa

A hot start to the season for the seventh grade Cubs football team was followed by a mix of wins and losses, en route to a 4-3 overall record and a 3-2 conference record for Powell Middle School.

The Cubs started the season out strong, defeating Riverton 24-0 to open 1-0 in conference before also defeating Laurel 20-0 to move to 2-0 overall.

Powell then lost 46-6 to Sheridan before defeating Worland 6-0 to move to 3-1 midway through the season.

After starting undefeated in conference the Cubs lost their first conference game to Cody 16-0, and lost a second consecutive game 30-0 to conference champions Lovell.

In the Cody game the Cubs fumbled away the ball multiple times inside the opposing 15 yard line, and were unable to gain any momentum after failing to score.

The Cubs finished the season on a high note in Lander, finishing with a 16-0 win.

“That game was fun to watch,” coach Juston Carter said. “They had improved quite a bit and played well as a team.”

He said a majority of the teams were on the same level this year, but turnovers determined a lot of the outcomes throughout the season.

Carter said that the defense was strong, completing four shutouts in the Cubs’ wins.

Karcher Foley was the quarterback for the seventh grade team and a player Carter said got better throughout the season for the Cubs.

Keaton Bennett led the way for the Cubs out of the backfield as the fullback for the team and Brayden Benander led the way on defense as a strong tackler.

Defensive ends Connor Farwell and Gabe McMillin gave the Cubs a strong presence on the edges to try and contain the opposing team’s offenses.

“[Connor] is probably the best defensive end I have ever coached at the seventh grade level,” Carter said.

Overall the team had more than 22 players come out for the season, which meant the team was able to continually play 11 on 11 in practice.

Carter said the team had a mix of size and speed and continued to learn quickly throughout the season.

He said that he as a coach learned during the season that he needs to be more clear and direct in his instructions to help the kids through practices and drills.

He said this team was one of the better teams in recent years, improving on the win total for the seventh graders this season.

He said that he hopes the team will stick together and will continue to improve heading into the eighth grade season.

“Next year I could see them winning a conference championship pretty easily,” Carter said.