During a Wednesday excursion, Juan Laden, a caver and photographer from Lander, gives four fledgling climbers a crash course in repelling and the intricacies of scaling using an ascender — a steel clamp-like device. 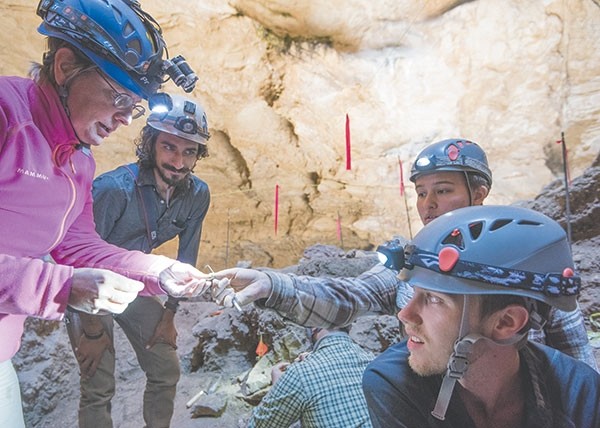 From left, Penny Higgins, from the University of Rochester-New York, caver Reece Minerley, students Blaire Voss and Ben Witt examine a bone discovered in the Natural Trap Cave in the foothills of the Big Horn Mountains Wednesday. The cave contains bones from prehistoric animals, including the extinct short-faced bear, the largest bear ever to have been unearthed.
Photo courtesy Dennis Davis 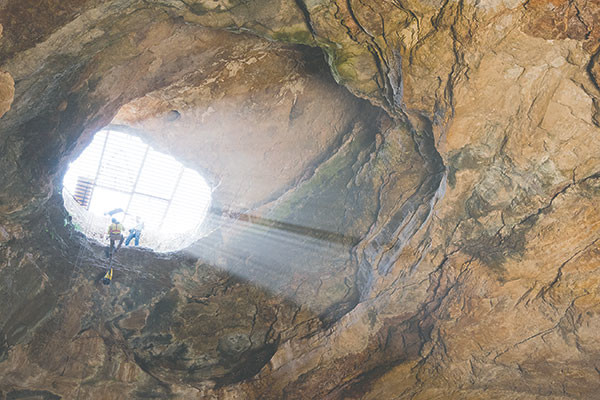 The descent into Natural Trap Cave requires a rappel of 85 feet. Climbing back out is slow going. Photo courtesy Dennis Davis 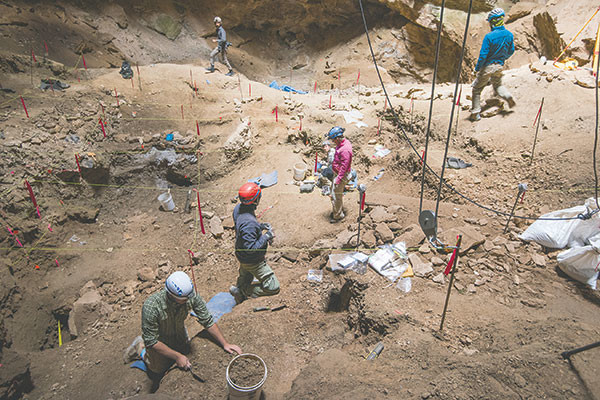 The dig is laid out in a grid pattern to record latitude, longitude and elevation of each find. Photo courtesy Dennis Davis 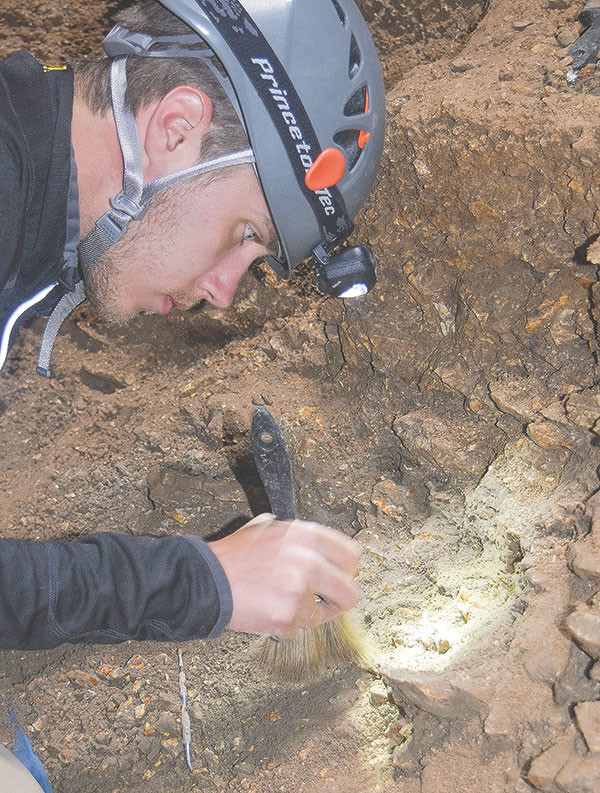 Their lives were cut short by a fatal fall thousands of years ago, but their stories may yet be brought to light from the Natural Trap Cave in the foothills of the Big Horn Mountains.

During a Wednesday excursion, Juan Laden, a caver and photographer from Lander, gives four fledgling climbers a crash course in repelling and the intricacies of scaling using an ascender — a steel clamp-like device.

The novice climbers each practice ascending a rope, hanging from an A-frame mounted on Laden’s old GMC truck, while swinging in the air like a fish hooked on a line.

Despite being just a few feet off the ground, it’s a bit unnerving knowing full well they’ll be grappling with the same device to climb 85 feet — more than eight stories — off the cavern floor.

Caver Reece Minerley lends Laden a friendly hand. Minerley said he drove from Jersey City, New Jersey, because he is fascinated with the discoveries below and wanted to help.

The cave is a sinkhole, a deep cavity in Madison limestone carved by water erosion for thousands upon thousands of years. Animals — hunter and hunted — plunged to their death when they inadvertently stumbled into the 15-foot-wide void. Their bones — preserved in the natural refrigerator — date back to the Pleistocene (1.64 million to 10,000 years ago) and Holocene (10,000 years ago to today) epochs.

All too soon, the greenhorn spelunkers must rappel into the cave. Hanging by a rope from the lip of the cave, loose stones and soil cascade to the dark expanse.

“Sometimes it feels like you’re stepping off into the abyss,” said Julie Meachen during a July 15 lecture at the Buffalo Bill Center of the West.

Meachen and Alan Cooper, of the Australian Centre for Ancient DNA, are the lead scientists at the site.

Looking down into the cave, the scientists’ headlamps look like bobbing car headlights viewed from a skyscraper. There is nothing left to do but step off... Once the rappel begins, it is relatively simple to control the speed of descent.

Reaching the cave floor, the cold hits like stepping out a hot July afternoon into a decidedly well air-conditioned office. At first it is welcome, but soon the 40-degree temperature and 95-percent humidity seep into the bones.

Jenny McGuire is interested in what she refers to as microfauna: rodents, lizards, snakes, birds, frogs and even fish possibly dropped off by raptors.

McGuire runs a lab in the School of Biological Sciences at Georgia Tech-Atlanta. Her interest is the ecological and evolutionary implications of climate change.

Microfauna don’t cover much ground, so rather than migrating if the climate or other environmental factors change, they must adapt or evolve to survive and perpetuate their species.

In the damp sand, ideal for sand castles, McGuire scrapes away with a small trowel where the bone fragments of a horse and of an American lion were unearthed.

Two species of horse have been uncovered in the cave, one resembling a zebra and stilt-legged horse, Meachen said at a lecture.

“You can tell its Pleistocene because of the red,” she said.

Sutherland cuts out wedges of packed sand like hardened chunks of brown sugar from the refrigerator.

The reason the skeletons aren’t intact in their sandy plots in the perfect preservation of the cave is because there was once a large cone of snow, Sutherland said. The going hypothesis is that, as the carcasses decomposed, they were transported off the snow slope to settle in different locations.

A geologist can employ radiometric dating to tell the exact age of the rock so a chronological order of when the bones were deposited in the cave can be made, said Penny Higgins, a research associate in the Department of Earth and Environmental Sciences at the University of Rochester-New York.

Higgins takes a shot from her Total Station, a surveyor’s instrument to record latitude, longitude and elevation of a location on the grid.

Much of the cave is laid out in a grid pattern so the whereabouts of bones can be recorded in three dimensions. With this technique, the team can prove the snow cone hypothesis of how the remains arrived in the cave, Higgins said.

Higgins, in charge on Wednesday, makes her rounds. She feigns exasperation over the musical choice of one of her students. The students and scientists work with diligence, demonstrating profound interest in the next bony clue just below the surface.

Blaire Voss, one of Higgins’ students, sings along quietly to the soundtrack from the Broadway musical, “Hamilton.” Voss scratches at the stone and sand with a tool that resembles a dentist’s scraper.

Bison were a common sight in the Holocene epoch, and bison antiquus from the Pleistocene.

Ben Witt meticulously brushes away sand from chunks of stone protruding like yellowed vampire fangs. He’s another student volunteer, who just graduated from the University of Iowa. He said he plans to continue his education in evolutionary biology.

“Everything is very well preserved, layer after layer,” Witt said.

A pack rat, designated “Packy Le Pew,” fell into the cave, Higgins said. Le Pew’s remains were left alone so the team could study his fossilization in the cave environs.

Like a solar-powered spotlight, the sun pours through the opening to warm a spot above the excavators’ heads. Dust floating everywhere, like billions of tiny translucent moths, divides the light into separate rays forming irresistible streamers of warmth for the crew that has been toiling in the chamber all day.

Others experienced in cave expeditions help out to ensure the paleontologists and other scientists are securely harnessed in their gear to climb safely out of the cave.

Using an ascender, the climb is grueling. Pull with the right arm and stand to proceed a couple feet, like a plodding human-powered winch. Slowly, ever so slowly, the people below become smaller until the final panting step to meet Laden, waiting to offer kindly encouragement. Then it’s back into the brilliant sunshine.

“It was a blessing the cavers volunteered for us,” McGuire said.

After thousands of years lying in their graves, the animals’ lives may one day be brought to light through scientific analysis.

“Put the puzzle together,” Sutherland said. “Tell a story.”

The sands of time in the Natural Trap Cave tell a 38,000 year-long history of Wyoming wildlife.

Julie Meachen, assistant professor of anatomy for Des Moines University, and Alan Cooper, of the Australian Centre for Ancient DNA, are the “principal investigators,” or the leaders of the excavation. Both were absent Wednesday when the Tribune visited.

The cave was found by cavers in the early 1970s. The first team surveyed it from 1974-85. Then the cave was closed until Meachen and her team entered. This is their third summer, Meachen said.

The animal remains deposited are likely the result of animals not knowing the hole existed until it was too late to react, Meachen said. “Unlucky for them, lucky for us,” she said.

There is no evidence of human remains in the cave. It is likely people knew of the hole and avoided it, Meachen said.

Fossils include an American lion that weighed 900 pounds. “It’s the largest cat that ever lived,” Meachen said. DNA says the American lion is most closely related to the African lion.

Remains of Western camels — long extinct — were unearthed, along with pronghorn from Pleistocene epoch (1.64 million to 10,000 years ago).

Among the animals in the cave was a short-faced bear, the biggest bear ever, Meachen said. The short-faced bear had a blunt muzzle and long legs to propel it over the open ground it preferred, she said.

But the bones are not intact.

The late Larry Martin, professor of ecology and evolutionary biology at the University of Kansas-Lawrence, posed the theory that animals fell on a huge snow cone inside the cave. As the snow melted, the animals’ bones scattered as they rolled down the snow, Meachen said.

However, a fully intact American lion was found in the 1970s, she said.

The constant 40-degree temperature in the cave is ideal for preserving bones and DNA.

Two types of wolves have been found — the grey wolf and dire wolf from the Pleistocene epoch. Dire wolves were similar to grey wolves, but larger, Meachen said.

The Beringian wolf remains Meachen examined were from the 1970s excavation, she said.

“Megafauna” such as mammoth remains have been found elsewhere in Wyoming.

The theory is the combination of less precipitation, less vegetation and being hunted by humans caused their extinction like a one-two punch, Meachen said.