I-80 eastbound was closed from several directions the afternoon of Jan. 6 due to brutal winter conditions. Truck drivers had to stay in Rock Springs and Green River for up to 27 hours. 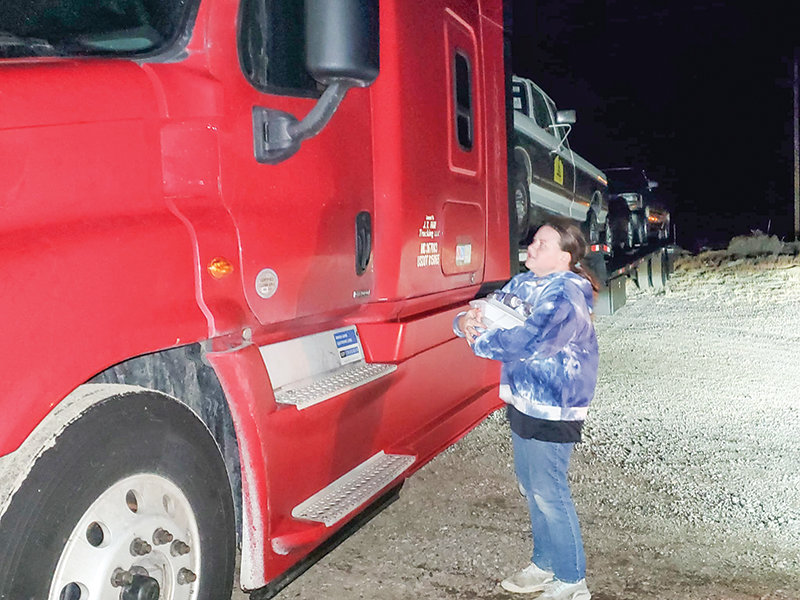 I-80 eastbound was closed from several directions the afternoon of Jan. 6 due to brutal winter conditions. Truck drivers had to stay in Rock Springs and Green River for up to 27 hours.

Even though it was a furiously windy and cold evening, Rock Springs resident Joey Majko and his volunteers jumped into action: They prepared 200 pork chop dinners and delivered them to those stranded at the Sweetwater Events Center.

This is not the first time they’ve come to the rescue. They’ve banded together during the holidays to keep truckers from being hungry as well.

Washington native Alyssa Spillman praised Majko and his volunteers for their help on social media with the following: “I’m not sure who the kind souls were that just delivered free hot dinners to us truckers at the fairgrounds in Rock Springs, but I love you so much. Thank you, it was so appreciated. You made my night.”

“It was the last year they allowed a 16-year-old to get an interstate CDL,” he pointed out.

He worked over the road in 2011, mainly for oilfield companies for six years. Soon, he was owner and operator of a cattle hauling company from 2017 until September.

“My boy was born with a massive 80% brain injury,” he explained. “I took a company job to be home with my son and help my partner Stephanie with him.”

Majko’s son was born with hypoxic-ischemic encephalopathy (HIE). It is brain damage caused by injury during birth. The newborn is oxygen-deprived and has limited blood flow.

Over the course of the years, roads had been shut down due to horrible weather across Wyoming. Since he didn’t know where he would be, Majko learned to pack heavy in case roads closed for a full day or two.

“It can be frustrating to get stuck in the middle of nowhere and be without the basic needs in an industry most people look down on,” he shared. “It was even worse when COVID put things off. We were expected to keep going without the essentials we needed, hot food, showers and other things.”

Any social interaction they got was gone during the pandemic, he noted, putting many truckers in a depressed state.

Since the community came together for his family when his son was born with HIE, Majko doesn’t accept donations for the food he cooks for the stranded truck drivers.

“This is my way of paying it forward,” he said. “It’s truly a community thing. We have all pulled together to make it happen and it’s truly amazing.”

“Our world is a tough place,” he said. “Being a trucker, you aren’t earning a paycheck if you aren’t moving and the pay isn’t very well for the time invested.

Most over-the-road drivers make $1,000-$1,500 a week before taxes, working 70 hours a week, which is incredibly low due to the prices of food, drinks and other things you need to survive.”

According to Majko, most drivers struggle if they have a family at home and they’re living on their own expenses while they’re on long trips.

“On the road truckers have very high suicidal and mental health problems,” he said. “I’m just trying to make them feel valued every which way I can.”