Robotics scrimmage gives opportunities for Powell to prepare for state

Classic rock was playing loudly in the background as robots rushed to stack the most cups in the arena. There was a hustle and bustle in the air while tech savvy students altered their complex robots …

Robotics scrimmage gives opportunities for Powell to prepare for state 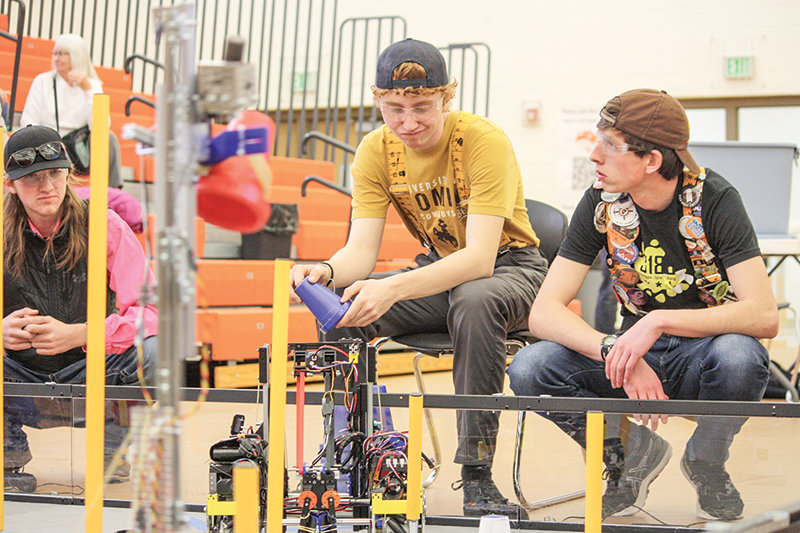 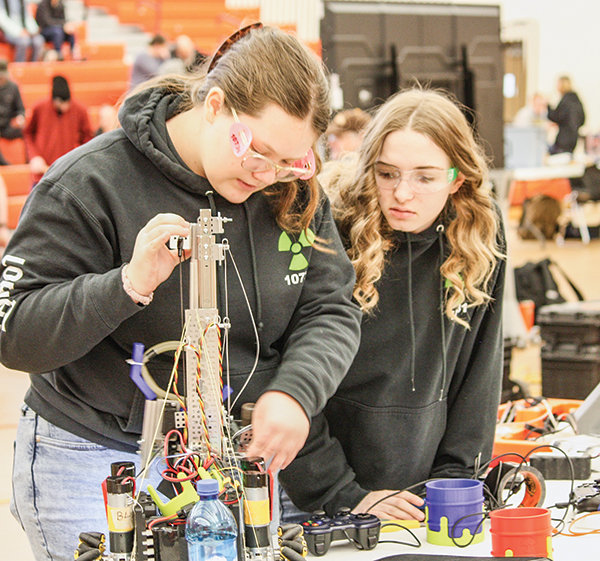 PHS sophomores Isabelle Lobingier and JJ Gardner work on their robot together as they look for tweaks that need to be made.
Tribune photo by Gabby Paterson
Previous Next
Posted Tuesday, January 24, 2023 8:15 am
By Gabby Paterson

Classic rock was playing loudly in the background as robots rushed to stack the most cups in the arena. There was a hustle and bustle in the air while tech savvy students altered their complex robots in order to enhance their performance in the next round.

The Powell High School robotics teams hosted their Robo Rumble on Saturday where teams from across the region participated in a scrimmage event. This year, 23 teams gathered in the PHS gym to work on their robots and practice before the state competition on Feb. 25.

“The Robo Rumble is integral to our season because it’s just a scrimmage,” PHS junior and the team 10731 Radioactive co-captain Kik Hayano said. “We can see our competition and work on our robots together.”

As the Powell teams look toward the state competition, the Robo Rumble was a chance to get in more practice and develop their robots.

“It’s a really important preparation before state,” PHS senior and 3188 Squiggle Splat Bang co-captain Kalin Hicswa said. “This is a really good opportunity to figure out some of our shortfalls and how we can overcome them in the next couple of weeks.”

During this year’s scrimmage, the teams competed in a cup stacking challenge where they could compete, then make any changes to their robots if needed.

“We’ve always known that our robot has a few special qualities that we have to work out through the scrimmage.” PHS junior and team 10731 co-captain Emma Johnson said. “We figured out that we had to rewire something with the string that allows the extension [for our claw] to move up a few levels.”

However, some teams had a little struggle with the competition and had the chance to make small adjustments to their robot.

“There’s a lot of little tweaks we can make to make everything quicker,” Hicswa said. “We’re fairly solid right now, but there’s always progress to be made.”

In previous years, the scrimmage was held in the Agriculture Barn to prevent conflicts with basketball. However, since the amount of teams in attendance has grown, the scrimmage relocated to the gym.

“We used the Ag Barn because it was smaller, and we didn’t have a lot of teams,” PHS robotics coach Joel Hayano said. “But, now that we’re over 20 teams, we have to be in the gym.”

For the remainder of the season, teams will be mastering and critiquing every aspect of their robots in order to place well at the state competition. During the state competitions, each team will be randomly selected to form an alliance with another team, but each team still needs to be prepared to hold their own.

“Our team’s goal is to try to at least master our autonomous code and make sure that we have consistency with our robot being able to reach those top poles [in the challenge],” Johnson said. “We’re trying to make sure that we put ourselves in the best position so that we don’t necessarily have to rely on others to score those points as well.”