Residents gather to stand against hate

A decision to remove a statue of Robert E. Lee  from a park in the heart of the city was met with controversy and protests. The protests reached critical mass on Aug. 12, as white nationalists marched on the University of Virginia, carrying tiki …

Residents gather to stand against hate 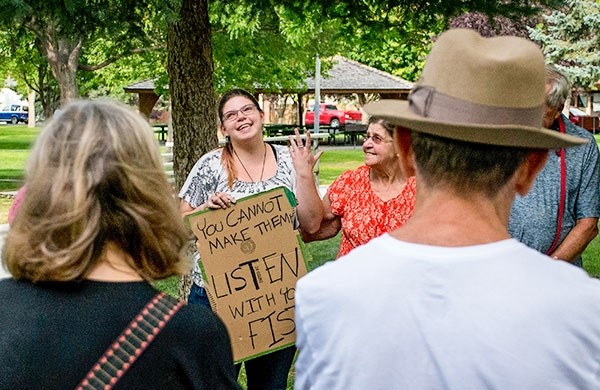 Zoey Lentz of Powell speaks to the crowd gathered to protest hate groups in the wake of the Charlottesville riots. About 40 people showed up to the impromptu gathering at Washington Park Wednesday to speak out against hatred in all its forms.
Tribune photo by Don Cogger
Posted Tuesday, August 22, 2017 2:29 pm
By Don Cogger

Recent events in Charlottesville, Virginia, were a sobering reminder that hate, in many forms, is alive in well in America.

A decision to remove a statue of Robert E. Lee  from a park in the heart of the city was met with controversy and protests. The protests reached critical mass on Aug. 12, as white nationalists marched on the University of Virginia, carrying tiki torches and waving Confederate flags. Many were seen raising their arms in a Nazi salute, according to several media outlets, and violent clashes with counter-protesters and law enforcement ensued, culminating in a man plowing into a crowd of counter-protesters, injuring 19 and killing one. Two more lives were lost when a helicopter carrying a pair of Virginia state troopers crashed while responding to the violence.

As a result of the tragedy, many cities organized impromptu demonstrations last week to speak out against hate and honor those injured and killed. Harriet Bloom-Wilson of Powell took to social media to organize a Wednesday gathering in Washington Park, with a similar event taking place in Cody.

“We felt the need to respond in some way to show solidarity with the people who were protesting the presence of neo-Nazis and Ku Klux Klan members marching through their community,” Bloom-Wilson explained. “The images of that were horrifying and frightening. The young woman who was killed as she tried to stand up peacefully in front of them led us to feel that we have to speak out.”

About 40 people responded to Bloom-Wilson’s Facebook post, gathering in a circle at Washington Park. Those who felt compelled to share their thoughts and feelings were encouraged to do so, and Bloom-Wilson said she was pleased with the turnout.

“It was one of those things where we said if there’s only five of us, that’s OK too,” she said. “We just wanted to show each other that we feel the same and that we will oppose this kind of event taking place in our own community, if God forbid it should ever happen.”

Wednesday’s gathering was designed to be non-partisan, though the group’s disdain for the current administration was evident. That said, conversation tended more toward peaceful solutions and a willingness to accept each other’s differences than anti-Trump sentiment.

“We wanted to take politics out of the equation; it has nothing to do with that,” Bloom-Wilson said. “It has to do with hate groups not having any place in our communities. It wasn’t politics that motivated us. It was the sight of something that our grandparents fought for, our parents fought for and that many of us have deeply held associations with.”

Zoey Lentz of Powell said she chose to attend the gathering to show support to her diverse group of friends. She made a two-sided sign, one side reading, “You cannot make them listen with your fists,” with the other side saying, “Equality means everyone is equal.”

Lentz said if she stood idly by while a friend was persecuted for their faith, race or gender, it wouldn’t be something she could live with.

That events like the one in Charlottesville could still take place in 2017 should have everyone concerned, Bloom-Wilson said, as should the brazenness with how people now openly identify with organizations rooted in hate.

“In the past, if they even had interviews with people associated with those organizations, they would either be covered or their voices would be disguised,” Bloom-Wilson said. “Here, they were proudly proclaiming their hate and racism and anti-Semitism. It’s unacceptable, and it has to be addressed.”

Andru Renaud of Powell was one of the more vocal attendees, speaking of acceptance and understanding of all people regardless of race, creed or political affiliations. He said after the gathering that he chose to speak because he had spent most of his life being silent.

“This is the best way for me to put my voice out there, to stand with people who say the same things,” Renaud said. “If I can speak to people who feel the same way I do about compassion and equality and those who do not, I’m more likely to stand up for myself and say ‘Why? What about your belief makes it better than mine?’ I would like to understand, because there are times that somebody else might change my mind. I reserve the right to not change my mind, but I want to hear your opinion. And I think that is a great portion of what is missing in political discussions today.”

Renaud said he hopes everyone who attended the gathering left with a renewed sense of purpose, as well as the will and want to take advantage of the opportunities to have those kinds of conversations when they are presented.

“I want to gain a little more perspective on how someone believes, and do it in such a way that it isn’t coming across as us versus them, to begin to promote equality — not by screaming about it, but simply by sharing,” he said.

Bloom-Wilson said she believed the gathering’s informal setting added to the ease in which people felt free to speak to one another.

One couple who joined the group did so on a whim, as they happened to be driving through the area from Florida and stopped at Washington Park for a break.

“They wondered what the circle was about, and they were so pleased to learn what the point of the event was; they were glad they had the opportunity to be a part of it,” Bloom-Wilson said, adding, “It was just a small way for people to come together and this couple from Florida felt the same way. We really are all connected.”

The event in Cody drew about 25 people, she said.