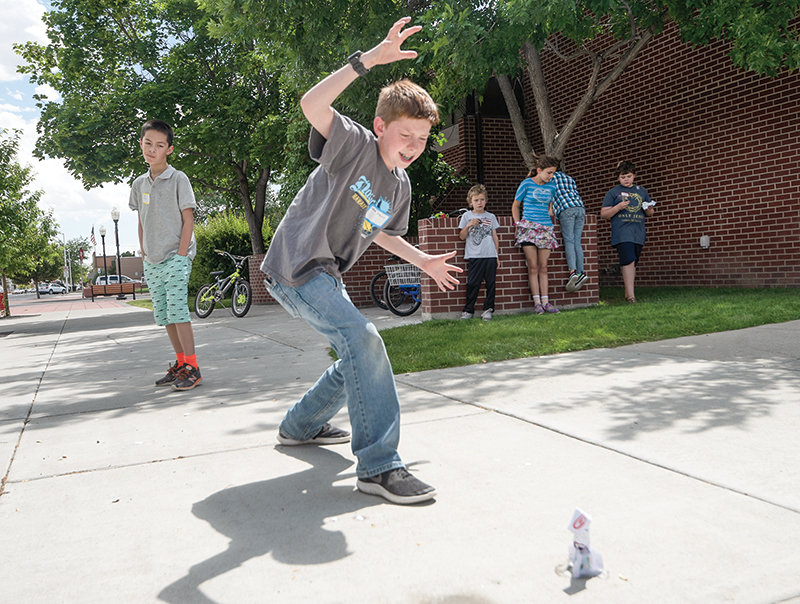 During a program on bubble rockets at the Powell Branch Library this summer, Sam Yount waits for his rocket to lift off. Park County libraries provided $480,779 worth of programs and classes during the last fiscal year.
Tribune photo by Carla Wensky
Posted Thursday, September 19, 2019 8:10 am

According to a recent report from the Park County Library System, the county budget of $1,705,894 yielded more than $7 million in services, if they were purchased at retail price.

Over the course of the fiscal year — from July 2018 to June 2019 — books, movies, digital downloads, music CDs and periodicals checked out totaled nearly 84 percent of the value for services.

Programs, classes and volunteer hours accounted for over 6 percent of the total.

Meanwhile, public computer use, wireless sessions, device training and access to online resources such as Ancestry.com, Universal class and NoveList added up to another 7-plus percent.

Meanwhile, library meeting rooms continue to provide gathering places for the whole community. More than 2,000 bookings in Powell and Cody alone amounted to the retail equivalent of $195,452, according to library officials.

Hours donated by volunteers have nearly doubled in the three years examined so far. The county libraries recorded 2,084 hours given in fiscal year 2019. That’s up from 1,094 hours in 2017. The value of those volunteer hours are substantial, with data from Independentsector.org suggesting they’re worth $25.43 an hour.

Active Friends of the Library organizations and many other volunteers contributed the equivalent of a full-time position last year.

Personal device training has increased 19-fold since 2016, when only 141 sessions were recorded. Now, with the prevalence and proliferation of cellphones, tablets and computers, library staff logged 2,700 sessions with patrons during fiscal year 2019. They helped people download and enjoy eBooks, audiobooks, movies, magazines, music on a myriad of platforms. They also helped resolve many technological issues.

Meanwhile, circulation of actual books, audiobook CDs and DVDs has decreased slightly as digital downloads have gained share in Park County — a trend that library officials said is not surprising.

Use of the public computers has decreased significantly in the years examined. In 2016 they were used 42,109 times, while this latest figure for 2019 shows only 13,685 sessions. Wireless sessions, however, have remained steady, indicating that people continue to rely on the libraries’ WiFi networks.

Attendance at library programs for all ages also continues to trend upward. The greatest gains — 20 percent since 2016 — were for children’s events.