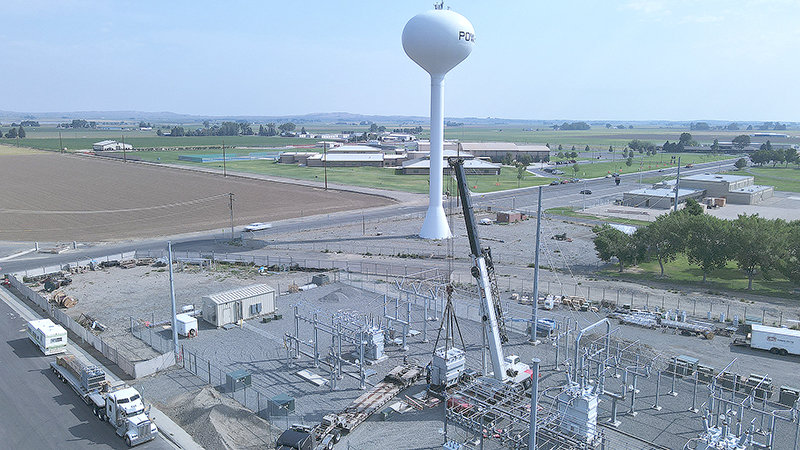 A new transformer is lifted into place in August, as part of an ongoing renovation of the Vining Substation. City power will be shut off on the nights of Oct. 28 and Nov. 1 so certain work can be safely performed.
Tribune file photo by Kevin Killough
Posted Thursday, October 21, 2021 8:20 am
By Kevin Killough

As part of the Vining Substation renovation, the City of Powell will cut off power to all customers for two nights next week.

The first outage will begin on Thursday, Oct. 28 at 11 p.m. and is expected to end around 3 a.m. During that time, crews will energize new equipment in half the station. Over the next couple days, the city will monitor the equipment to make sure it functions properly.

Then at 11 p.m. on Monday, Nov. 1, power to the city will again be shut off so that crews can switch the city over to the new equipment. That outage is expected to last six hours.

The city had planned to perform the first set of outages during the summer, but electrical equipment is as prone to supply issues as so many products today. City Administrator Zack Thorington said the city was fortunate to have ordered most of the items for the project before supply chain issues arose, or the delays would have been much worse.

“We were just lucky we had parts ordered before anyone knew what COVID was,” Thorington said.

Councilor Zane Logan, who was city administrator the last time the city installed transformers at the substation in the early 1990s, said those outages occurred on a cold February morning with subzero temperatures and winds.

The city will benefit from
having brought the first transformer online after summer, as it won’t have the kinds of loads placed on it that occurs when air conditioners are running high, as the substation did during this summer’s high temperatures.

The weather for next week’s planned outages will have temperatures in the mid-30s, with low winds. Thorington said the city is prepared to delay the outages should the weather take a turn for the worse.

He and Powell Electric Superintendent “have discussed this scenario, and as of now the weather looks to be cooperating,” Thorington said.

Thorington advises residents to crank up the heat when they go to bed those evenings so they have some heat stored up in their homes during the outages. He added that the outages could be shorter than planned, but there are too many uncertainties to say for sure.

The Vining Substation caught fire in June 2019, leaving the city without power for several hours. The city was able to get the substation functional while it carried out a $3.1 million renovation. The entire project is expected to be completed in spring 2022.