For the first time in a while, the Powell Pioneers Legion Baseball team’s bats weren’t rolling on Monday — until they were.

Other than a seventh-inning rally, the Pioneers … 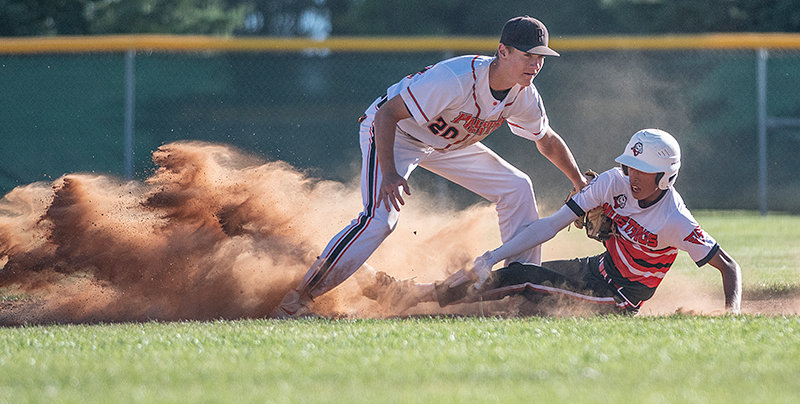 Trey Stenerson tags a runner out at second base in game two of Powell’s Monday doubleheader against the Lovell Mustangs. An improved dugout mentality helped the Pioneers push head of the Mustangs in the second game, manager Joe Cates said.
Tribune photo by Carson Field 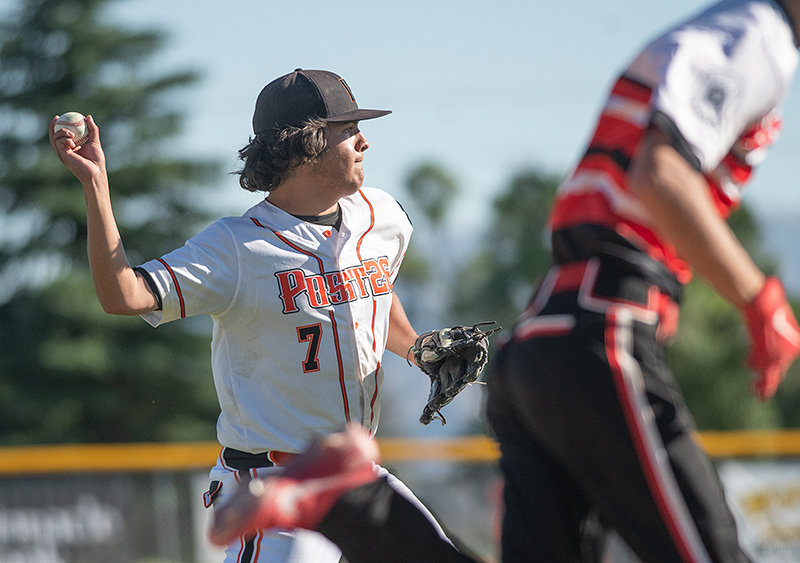 Pitcher Kolt Flores throws a ball to first base in the first game of Monday’s doubleheader against Lovell. After a slow offensive start, the Pioneers approach at the plate improved in game two.
Tribune photo by Carson Field 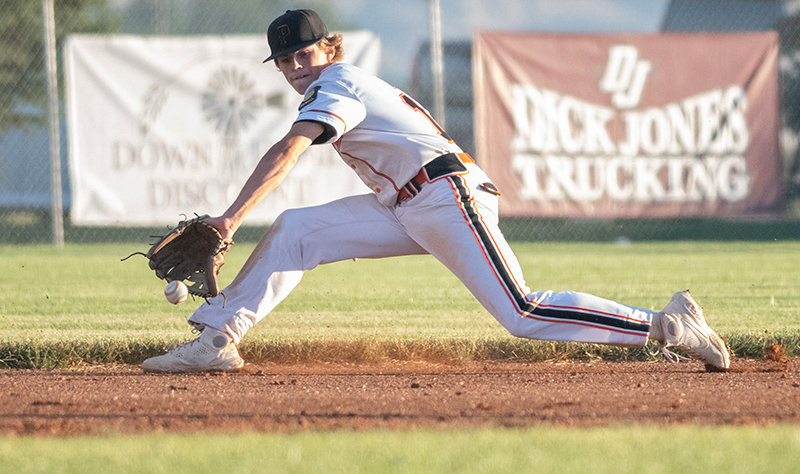 Pioneers shortstop Brock Johnson stretches for a ground ball against the Lovell Mustangs on Monday. Powell enters Thursday 25-5, with the team set to face Cody at home.
Tribune photo by Carson Field
Previous Next
Posted Thursday, July 1, 2021 8:25 am
By Carson Field

For the first time in a while, the Powell Pioneers Legion Baseball team’s bats weren’t rolling on Monday — until they were.

Other than a seventh-inning rally, the Pioneers never found a rhythm in game one of Monday’s doubleheader against Lovell, losing 6-3. That stagnance carried into game two, with Powell falling into a 5-3 deficit after a couple of innings.

In the third inning, however, Powell’s offense woke up. The Pioneers notched baserunner after baserunner, and with the bases juiced, senior Landon Sessions belted a fastball into left-center field for a three-RBI double, giving his squad a 6-5 lead.

“It was a fastball right down the middle, so I just tried to put a smooth swing on it,” Sessions said. “I feel like it built on the energy and kind of just started it.”

After Sessions’ knock, there was no going back. He came around to score that inning and Powell added three more runs in the fourth, with the Pioneers eventually taking game two, 12-6.

One of the Pioneers’ three runs in the fourth inning came off the bat of Kobe Ostermiller, who crushed a solo home run. It was his fourth roundtripper of the season and his third out-of-the-park shot of 2021. Ostermiller tied for the most hits in the win with two.

“When Kobe’s hitting, we’re hitting,” manager Joe Cates said. “It seems like he’s our spark for everything right now. He’s got power to go along with his speed, and I’m surprised he only has three [home runs].”

In addition to Sessions’ and Ostermiller’s timely at-bats, Cates attributed the improved showing at the plate to a better “dugout mentality,” citing proficient communication from his squad and vocal leadership from bench players.

Trey Stenerson earned the win on the hill, pitching five scoreless innings and striking out six. It was his second time throwing in a week’s time, following a quality outing against Bridger Valley on Saturday.

The Mustangs’ approach at the plate carried them to the game one win. Even though Powell cut into that lead late in the game, Cates called Lovell the best hitting team he’s seen so far this year.

After the split, the Pioneers are 25-5 overall. They play a home doubleheader against Cody this evening (Thursday) before a five-day break due to the Fourth of July.

Against a strong opponent like Cody — which has 27 wins this year — the Pioneer bats will need to replicate their success from game two of Monday’s tilt with Lovell.

“We just have to keep our composure and keep swinging at good pitches; avoid bad ones,” Sessions said.