The Ron Rickert Memorial Club Championship wrapped up this past weekend at the Powell Golf Club, handing out prizes to top finishers from around the Powell area.

Chris Manning was the men’s …

Chris Manning intently eyes his putt as it just skirts the cup on the 16th green during Sunday’s final round of the 2022 Ron Rickert Memorial Club Championship. Manning went on to defeat Ryan Tobin by two strokes to claim the ‘Club Champion’ title for 2022.
Tribune photo by Toby Bonner 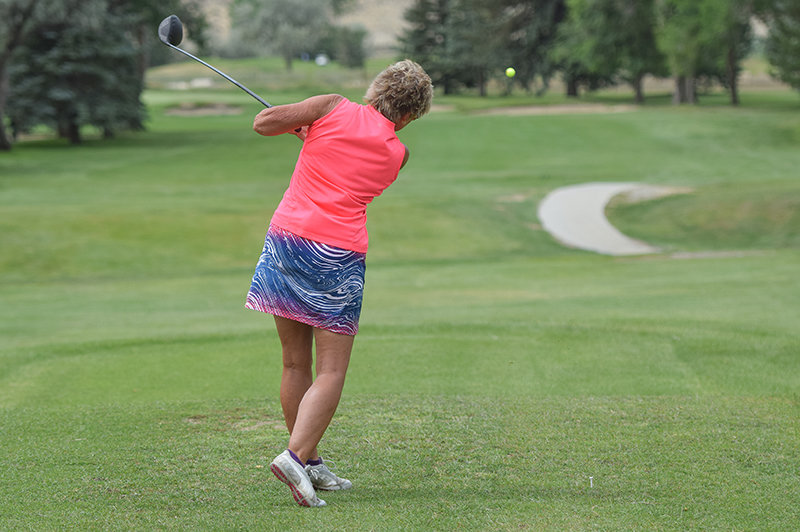 Teresa Eicher drives a tee shot on the 10th during an extra hole playoff vs. Laurie Lee. Eicher edged out Lee on the 10th to capture the Powell Golf Club Ladies Senior Division title in the 2022 Ron Rickert Memorial Club Championship.
Tribune photo by Toby Bonner
Previous Next
Posted Thursday, August 18, 2022 8:05 am
By Seth Romsa

The Ron Rickert Memorial Club Championship wrapped up this past weekend at the Powell Golf Club, handing out prizes to top finishers from around the Powell area.

Chris Manning was the men’s club champion, finishing with a 73 and 74 to take home the low gross with a 147 over the two-day event.

Second place went to Ryan Tobin who finished with a 78 and 71, and Yancy Welch finished third with a 74 and 83.

Welch, Ryan Tobin and Josh Bassett all tied for first in the men’s net with a 145.

Kami Scott won the women’s club title, finishing with rounds of 85 and 86. Cameron Frates finished second with a 93 and 82 and Kelsey Tobin finished third with a 101 and a 99.

Kelsey Tobin won the women’s net, finishing with a 140. Jill Quigley finished second with a 145 and Kami Scott finished with a 151 in third place.

Teresa Eicher was the women’s senior club champion, finishing with an 85 and an 83, defeating Laurie Lee on the first playoff hole. Finishing in third place was Mary Lewis who carded scores of 84 and 89.

Doug Long was the champion in the men’s senior division, winning with rounds of 79 and 84 to take home the title. Finishing behind Long in second place was Rich Olmsted with an 82 and an 84.

Jason Quigley finished third with a pair of 84’s over both days.

Pat Day finished first in the net, finishing with a 144. Long finished second with a 147 and Jason Quigley finished third with a 148.

David Frost took home the title in the men’s super senior division, winning with a 79 and an 87 over two days.

Marc Saylor placed second with an 85 and an 84 to finish three strokes behind Frost.

Jerry Herweyer posted scores of 87 and 86 to finish third.

Frost also won the net with a 146, Saylor finished second with a 151 and Gerry Johns finished third with a 153.