The Shoshone Rock Club will host a gem and mineral show next week — the first in about a quarter century. The event returns to Powell for the first time since the late 90s on Aug. 12 and 13 at …

Wyoming Jade cabochons in silver and gold settings made by Gary Olson will be on display at the Shoshone Rock Club’s show Aug. 12-13 in Powell. Olson is the president of the club.
Tribune photo by Mark Davis 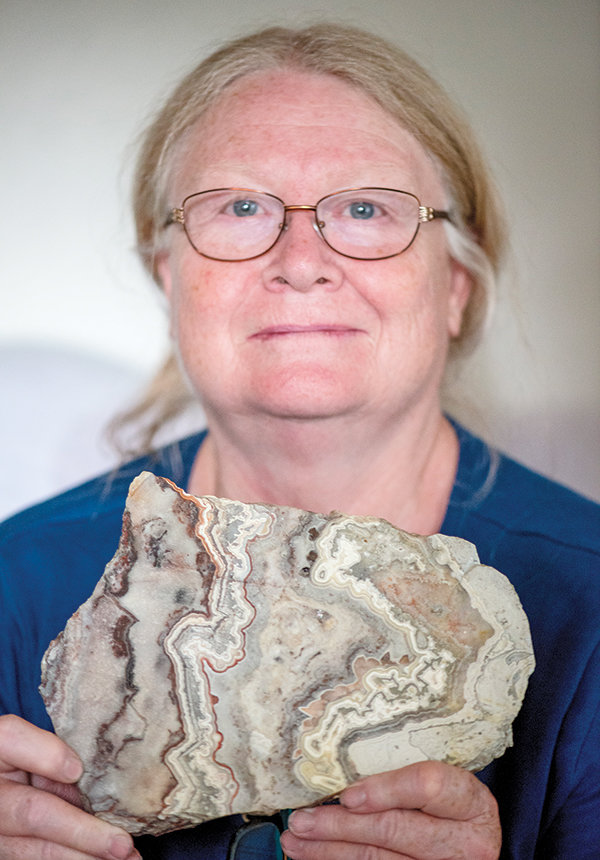 Cindy Cordova, chairperson of the Shoshone Rock Club’s show, shows a beautiful slab of agate cut with a rock saw — part of her collection.
Tribune photo by Mark Davis 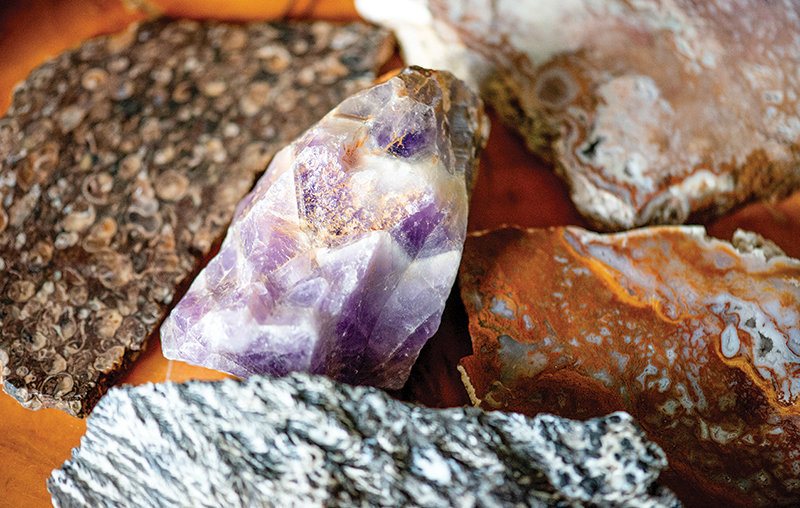 Gems and minerals, many available to find in Wyoming and Montana, will be the stars of the show. There will also be demonstrations on flint knapping, rock cutting and the creation of cabochons during the two-day show.
Tribune photo by Mark Davis
Previous Next
Posted Thursday, August 4, 2022 8:15 am
By Mark Davis

The Shoshone Rock Club will host a gem and mineral show next week — the first in about a quarter century. The event returns to Powell for the first time since the late 90s on Aug. 12 and 13 at Heart Mountain Hall at the Park County Fairgrounds.

Organizers envisioned the show would be a small event where locals could show their finds and sell and trade material. However, it grew when they found out the show could be a test run for a possible state convention in Powell. For Shoshone Rock Club president “Lapidary” Gary Olson, it’s an exciting opportunity to show off the Big Horn Basin’s excellent natural resources and enthusiasm for rocks and products made from Wyoming gems and minerals like jade, agates and jasper.

“We’d like to host the state show in Powell in two years. We’re doing this summer’s show to see if that’s something that’s realistic for us,” he said.

It takes a lot of manpower to put on a state show, he said and will take months of advance planning. He hopes bringing shows back to Powell will raise the awareness of the hobby and the Shoshone Rock Club.

“I call it stirring up the pot a little bit. You know, to drum up interest.”

Olson, who has been blind since shortly after birth, has been fascinated with rocks since he was filling his pockets with stones as a toddler. He can differentiate the rocks through their feel and actively creates jewelry using cabochons cut from his finds. His wife, Ilene, who is the vice chairperson for the show, helps in the identification process, taking note of color and quality as well as helping to create jewelry from the material.

Cindy Cordova, the show’s chairperson, hopes the show will help bring back sweet memories of her parents’ former business, Canyon Rock Shop in Cody. Proprietors June and S.T. Rich joined the club in 1968 and eventually opened their store in 1974. Of course, rocks were a big part of the entire family’s lives.

“During summers it was all about the rocks,” Cordova said.

Cordova and her sister, Jenna Johnson, worked in the shop and eventually purchased the store’s inventory after their father passed away. Cordova is drawn to the rocks, but also loves interacting with fellow rockhounds, who share a love for the natural world and treasure hunting.

People from around the globe came to the shop to buy rocks, supplies and jewelry. They had a guest book for folks to sign in and had signatures from visitors as far away as Japan, Rich said.

Cordova and her husband, Gilbert, are recently added members of the club, joining after becoming empty-nesters. But they’ve always had a love for digging in the dirt and collecting specimens.

The show will feature the collections of several of the area’s top enthusiasts as well as demonstrations on cutting rocks and creating cabochons, flint-knapping demonstrations by local artist Dan Lynn, as well as food trucks and door prizes.

The Shoshone Rock Club meets at the Powell Library on the second Tuesday of the month, but is currently on summer recess. The club sponsors outings for its many dozens of members and encourages members to share their interest in and knowledge about rocks, minerals, lapidary work, knapping and other rock-related hobbies.