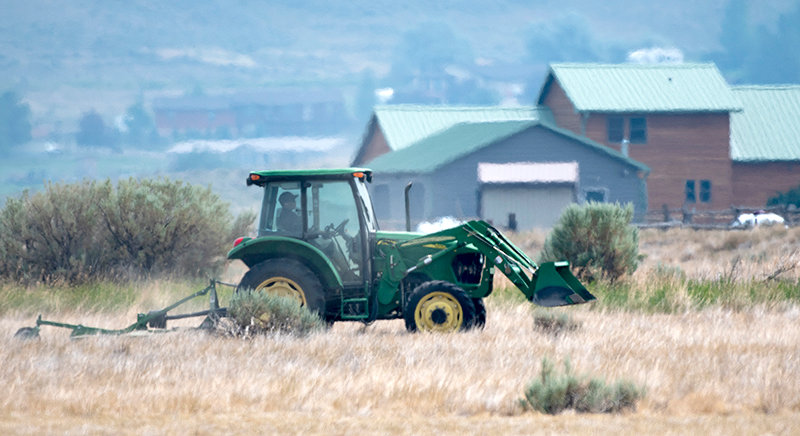 A crew member at Buffalo Bill State Park mows the grass in an area under consideration for an RV camping area on the South Fork side of the reservoir. Work has been halted on pending a public meeting set for August 9.
Tribune photo by Mark Davis 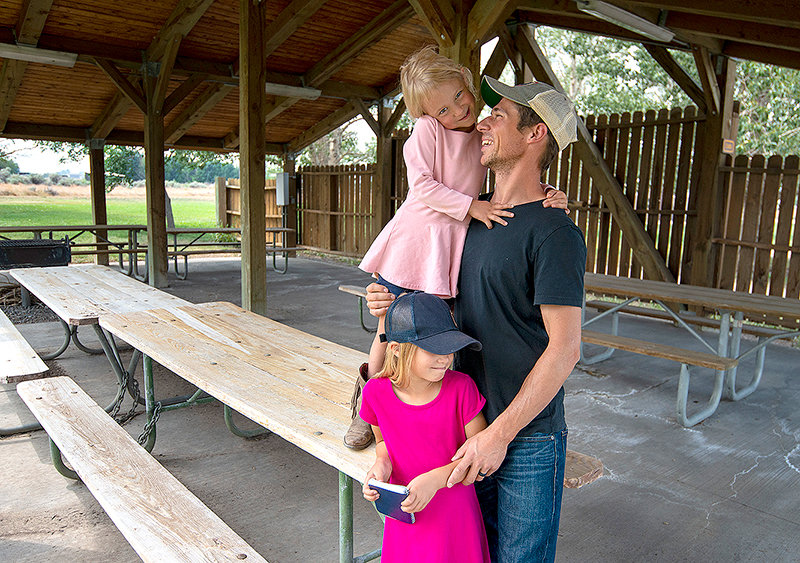 Jason Byer and his daughters Angelina, 6, and Anastasia, 4, hang out at a shelter at the Bartlett Day Use Area at Buffalo Bill State Park. It might be transformed into a temporary camping area for RVs to help the park keep up with record demand for camping facilities outside Yellowstone National Park.
Tribune photo by Mark Davis
Previous Next
Posted Tuesday, August 3, 2021 8:20 am
By Mark Davis

As tourists pour into Park County, Buffalo Bill State Park administrators saw an opportunity to add some much-needed RV campsites using leftover CARES Act cash. But when they decided to install 40 temporary spaces on the South Fork side of the Buffalo Bill Reservoir, residents of the sleepy neighborhood near the park’s Bartlett Lane day use area were taken by surprise.

After a surge of complaints, state park officials have decided to put the plans on hold.

Tractors mowed and stakes were deployed to mark off new spaces last week while homeowners of an adjacent subdivision and seasonal residents at the Big Horn Basin Boat Club were in the dark about the planned development.

“We probably should have done a better job with sharing information on the front end, just explaining what’s going on,” said Dave Glenn, deputy director of the state parks.

While driving to Laramie on Thursday, Glenn said he got a call from a person who was furious, thinking that “we were permanently putting in 100 campsites on Bartlett Lane.”

The lack of information led to rumors, Glenn said. The temporary site for 40 RVs were rumored to be 100 permanent spots as residents tried to guess what was happening. In response, Jason Byer started a petition to oppose that plan on change.org that already has more than 400 signatures. Hundreds signed, hoping to slow the state’s roll. And it worked. Now the state is putting the planned RV park on hold in an attempt to allay fears.

Byer’s family has lived in the area for decades and he has gone to extremes attempting to keep Bartlett Lane quiet. Recently a large plot next to the park came up for sale and there were fears it would be used as a new subdivision. Byer and a partner decided to purchase the land before it was too late, building two houses on the land instead of watching several dozen new homes flood the area.

“We both have little children and want to give them kind of an agricultural experience,” he said. “We like the openness of this area of the South Fork.”

He understands the need for additional camping spots, having spent a year searching for the best camping spots for his family and their large pull-behind camper while testing the ability to work remotely. However, he doesn’t want to see the Bartlett Lane day use area become a busy campground.

“The North Fork is the right place for that,” Byer said. “There’s plenty of room for an expansion to an existing place. It’s non residential. It’s already a busy highway.”

Park officials have scheduled a public meeting with nearby property owners for 6 p.m. on Monday, Aug. 9 before moving forward with any of their plans. The meeting, held at the park’s Shreve Lodge, will attempt to address park-wide temporary campsite expansion effort.

Glenn said there were always plans to seek public input before making the new sites permanent, but state parks leaders were moving as fast as possible to react to the current demand.

“Our mantra is, one more night, one more cheeseburger. We’re continually trying to get people to stay one more night and buy more,” Glenn said of the gateway community.

But he, too, said state park officials had always intended to have public hearings — and study the site’s use — before making temporary changes permanent.

“We want to keep in mind the concerns of residents,” he said.

Byer is afraid once the temporary spots are in use, there’s no turning back.

“The whole point of the petition was to stop construction so we could have these conversations,” he said.

Capturing tourist dollars has become more important in past years. About 17% of visitors to Yellowstone National Park enter through the East Gate near Cody. Since late summer and fall last year, the park has been breaking attendance records each month, so far supporting Yellowstone Superintendent Cam Sholly’s prediction of a record year.

Developing facilities on the park’s east side is important as the three most popular entrances struggle with traffic woes.

“Let’s think about that one for a minute,” Sholly said at a June event. “Five entrances, 2.2 million acres — bigger than the states of Delaware and Rhode Island combined — but at any given time 60% of the visitation [to Yellowstone] is in the western corridor.”

Providing space for RVs and campers is important to growing Cody’s tourism industry — especially as the state’s mineral extraction industry and its associated tax revenue slumps, Glenn said. Buffalo Bill State Park recently doubled its capacity of the North Fork camping area. Before that, the park was turning away visitors on a daily basis, which limited visitors’ options near the East Gate. The facility is basically sold out for the entire season unless park managers can find new ways to open space.

(Editor's note: This version of the story corrects the date of the public meeting. Buffalo Bill State Park leaders will host the meeting at Shreve Lodge beginning at 6 p.m. on Monday, Aug. 9. Due to an editing error, an earlier version incorrectly stated that the meeting was Friday.)