Strong command from Powell Pioneer pitchers Jacob Gibson and Ethan Welch plus some timely hitting boosted the American Legion team to a Friday win over the Billings Cardinals. That was sandwiched … 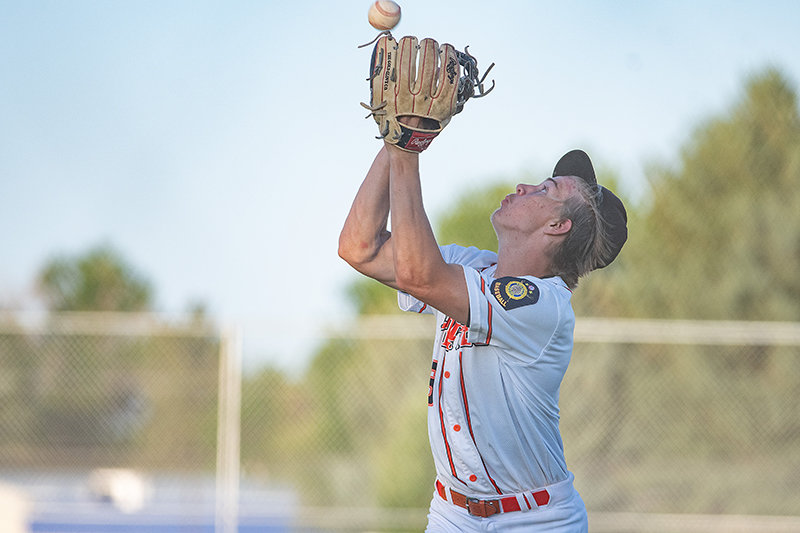 Outfielder Kobe Ostermiller makes a catch on the warning track against the Billings Cardinals. Powell won the second game of Friday’s doubleheader for its ninth win of the season.
Tribune photo by Carson Field 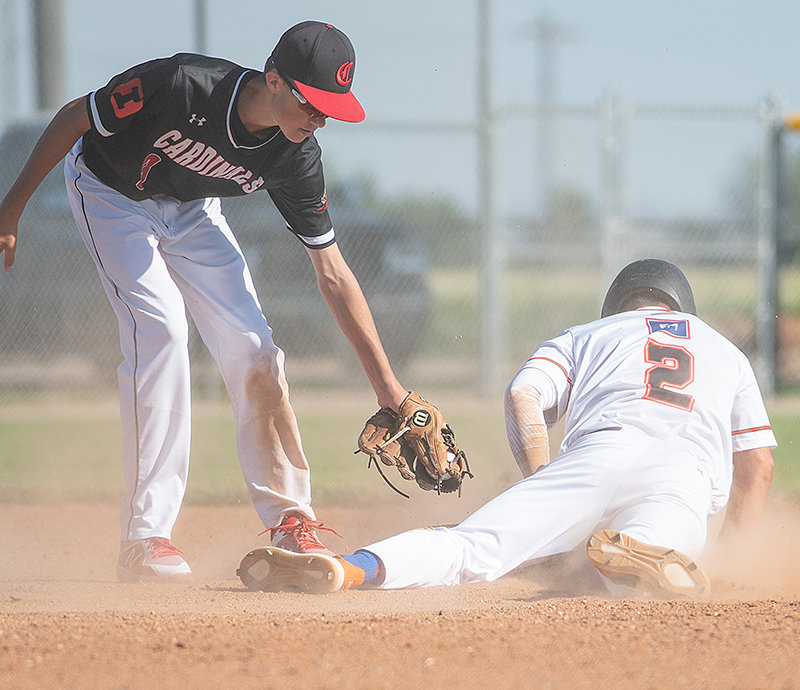 Colin Queen avoids a tag at second base after stealing in game one of Friday’s doubleheader against Billings. The Pioneers lost the game 13-0.
Tribune photo by Carson Field
Previous Next
Posted Tuesday, July 14, 2020 8:15 am
By Carson Field

Strong command from Powell Pioneer pitchers Jacob Gibson and Ethan Welch plus some timely hitting boosted the American Legion team to a Friday win over the Billings Cardinals. That was sandwiched around an earlier loss to the Cardinals and losses to Jackson on Saturday and Cody on Sunday.

Gibson and Welch helped keep the Cardinals’ offense in check in the second game of Friday’s double-header at Ed Lynn Memorial Field, as they allowed just one run in the first five innings.

This fueled the Powell offense, which sparked in the middle innings. The Pioneers posted nine runs between the third and fifth innings.

“We had guys come out and pound the zone. It’s easy to roll into your at-bats when you’re not in the field forever,” head coach Joe Cates said. “We were confident at the plate and put up some runs, and then they came back in really fast and they put up more runs.”

Powell wound up taking a 9-5 win at home, its ninth of the season.

It stood in contrast to game one of Friday’s doubleheader, which ended in a demoralizing way for the Pioneers.

A three-run deficit turned into a 13-run deficit after the visiting Cardinals crossed the plate 10 times in the top of the fifth inning. With no answer, the Pioneers lost 13-0 in mercy-rule fashion.

“We were throwing balls and walking too many people,” Cates said. “When we start struggling there, everything starts slowing down.”

Cates traced the team’s inability to produce at the plate in game one to the inconsistency on the mound. The abundance of walks and baserunners surrendered to Billings translated into a lag for the Pioneers’ offense, which notched just one hit the entire game.

Friday’s doubleheader was just the start of a strenuous stretch, with three more games in the next three days.

“We have to try and get a break as we can,” Cates said. “We’re going to throw a lot of guys. It’s just trying to mix it up a bit and give guys rest here and there, just not do it.”

On Saturday, Powell dropped a non-league game against the
Jackson Giants. Scoring 10 runs in the first three innings paved the way for the Giants’ 16-7 rout of the Pioneers.

The Pioneers faltered once again in Sunday’s contest against the Cody Cubs. Powell once again failed to find a groove on the mound, dropping the game 16-10.

Now 9-14 overall, the Pioneers were set to get another chance at defeating its cross-county rival on Monday in Cody at Milward Simpson Field.