A busy weekend for Powell High School wrestling saw the Panthers on the road throughout the state, defeating Worland in a dual 48-36 before heading to the Lander Invitational where PHS finished … 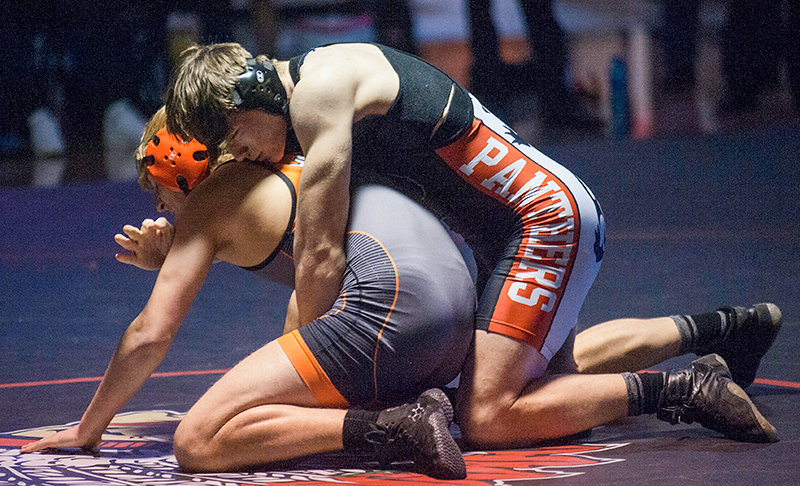 Jimmy Dees wrestled his way to a victory during the Panthers’ dual with Worland on Thursday and a first-place finish at the Lander Invitational over the weekend.
Photo courtesy Alex Kuhn, Northern Wyoming News
Posted Tuesday, January 24, 2023 8:05 am
By Seth Romsa

A busy weekend for Powell High School wrestling saw the Panthers on the road throughout the state, defeating Worland in a dual 48-36 before heading to the Lander Invitational where PHS finished seventh.

Starting the weekend early on Thursday, the Panthers traveled to Worland in the first return to in-state action for Powell since December.

The dual started out strong for the Panthers, with Wyatt Nicholson getting a forfeit at 106, and Gabriel Whiting, Weston Thomas, Vinny Timmons and Patrick Haney all getting pins to give Powell an early 30-0 lead.

Worland rallied in the middle weights, getting victories by pins at 138 over Wyatt Heffington, 145 over Drew Valdez, 152 over Jack Van Norman and a forfeit at 160 to cut the lead to 30-24.

Lannon Brazelton responded for the Panthers at 170, getting a pin in under a minute to extend the lead back out to 12 with four weights remaining.

Worland earned points back at 182 after a pin to Dillon Melton in the third round cut the lead to 36-30.

Jimmy Dees and Stetson Davis earned pins at 195 and 220 pounds to help secure the victory for the Panthers, before Doug Bettger lost at 285 to make the final score 48-36.

“I was really happy,” coach Nick Fulton said. “Worland wrestles really well at home. It’s good to get a win there against a quality team. I was happy with our guys, it’s been awhile since we beat them.”

The victory over Worland was the first for the Panthers over the Warriors under Fulton, who is in his fourth year leading the team.

Heading back out on the road Friday and Saturday, the Panthers traveled to Lander to compete against a majority of the 3A teams in the state.

Dees (22-7) led the way for the Panthers, finishing 3-0 after earning a first round bye and winning by pin over Nathan Harper (7-3) of Worland to take first place at 195 pounds.

Shifting back down to 106 pounds after wrestling up on Thursday, Whiting (23-9) won three straight matches to advance to the championship round before falling to William Wood (19-11) of Cody via major decision 11-1 to place second.

Bettger (14-8) made his way to the championship after a first round bye, before losing to undefeated Kenai Bergquist (10-0) from Douglas by pin to take home a second place finish.

The 106 class continued to be a strong weight for the Panthers, as Nicholson (12-9) was the second Panther to get on the podium after battling back to a sixth place finish after a 2-3 weekend.

On the girls side, both Yessenia Teague and Allison LeBlanc battled back from opening round defeats to place third overall for the weekend.

“We looked a bit sluggish Saturday morning,” Fulton said. “It wasn’t a bad performance but it wasn’t our best either.”

Fulton said the Lander Invite was a good indicator of where things stand in 3A this season, feeling the Panthers can be right in the mix when at full strength.

Powell heads back out on the road this weekend to take part in two key events in Riverton, starting with a dual on Thursday at 6 p.m. before staying in Fremont County to take part in the Ron Thon Memorial on Friday and Saturday.

“I expect my older kids to perform,” Fulton said. “It’s an exciting tournament. Every team in Wyoming is invited and that’s always fun. Wyoming is such a great wrestling state and going to compete against the best in our state is exciting.”

Powell will return home next week, taking on Thermopolis in a dual on Tuesday at 6 p.m.