After a week-and-a-half off the pitch, Powell High School boys’ soccer returned in stride.

The Panthers earned two wins in their most recent matches, defeating Lander Valley 1-0 at … 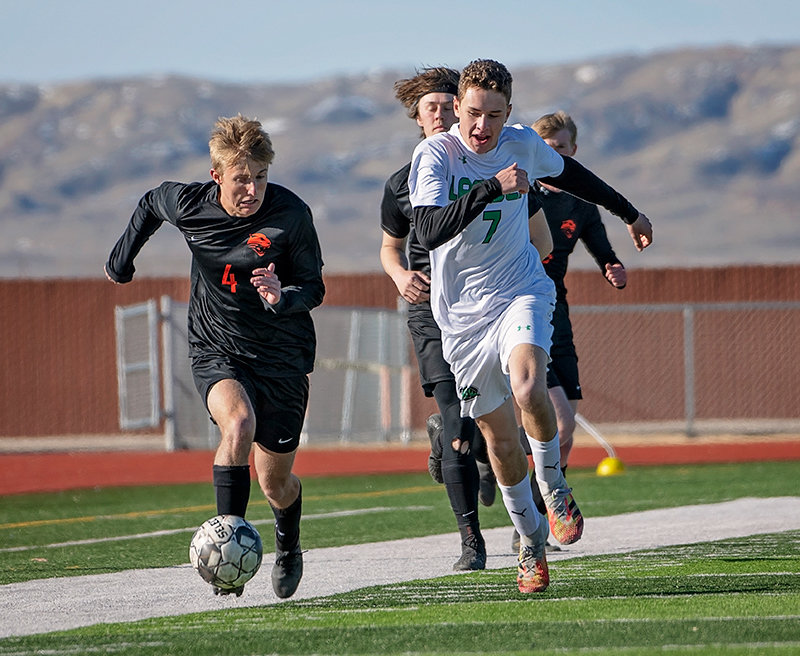 Keaton Rowton runs toward a ball on the attack Friday in Powell’s 1-0 win over Lander Valley. The Panthers are now 5-1 after back-to-back wins.
Tribune photo by Carla Wensky 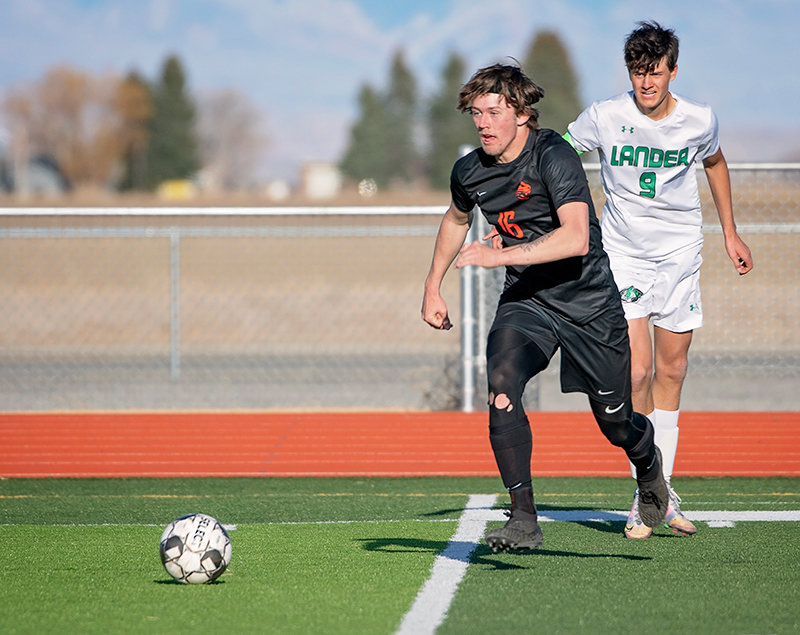 Sam Bauer lunges toward a loose ball Friday in Powell’s match against Lander. Bauer scored the game-winning goal with under 10 minutes remaining in the contest.
Tribune photo by Carla Wensky
Previous Next
Posted Tuesday, April 13, 2021 8:10 am
By Carson Field

After a week-and-a-half off the pitch, Powell High School boys’ soccer returned in stride.

The Panthers earned two wins in their most recent matches, defeating Lander Valley 1-0 at home Friday and Pinedale 4-0 on the road Saturday. They are now 5-1 overall on the season.

Powell’s first contest of the weekend was similar to its March 30 match against Worland, where the Panthers lost 1-0 in extra time. Friday’s match against Lander was just as hard-fought, but a Sam Bauer goal in the final 10 minutes allowed PHS to prevail with a one-goal win.

“Lander’s a good team,” head coach David Gilliatt said. “They presented some attacking options that made us have to think on our feet. It was a physical game and a good chance to be in a tough fight.”

Though the win was nerve-racking and well-contested, Gilliatt thinks the gutty game will have a positive impact on his squad.

“We get to expose other things,” he said. “We don’t grow as much by not having to push ourselves in matches. We have to think more, work harder.”

Against Pinedale, the Powell team got off to a slow start, according to the coach. Though the Panthers scored twice in the first half, he said the team “played down.”

With very little time between games at the state tournament, Gilliatt hopes these back-to-back matches were a learning experience for his team.

“It’s a great training opportunity,” the coach said. “We came in with tired legs and mentally not playing our game.”

But after the break, PHS played better against the Wranglers. The squad made adjustments to play at a “higher quality,” adding two goals to its advantage and leaving Pinedale with a 4-0 win.

Bauer won “man of the match” honors for both games, while Garrett Morris earned “defensive standout” recognition for both matches.

After Bauer scored the game-winner against Lander, he added another score and an assist in the Pinedale win.

Meanwhile, Morris was the “rock” for PHS in both wins, according to the coach. The junior “anchored the midfield and did everything but score,” Gilliatt said.

Six games into the season, PHS has seen nearly every outcome: blowout win, close win and close loss. Getting a variety of different results to start the year may benefit the squad as it approaches the postseason.

“The games where there’s a higher scoring margin are good for confidence and getting in a pattern of playing,” Gilliatt said. “The biggest value are competitions against teams like Lander and Worland. It’s good to see different formations. You can review film all day, but until you’re actually on the turf, it’s a different story.”

Next, PHS hosts Mountain View and Lyman at 5 p.m. Friday and 2 p.m. Saturday.