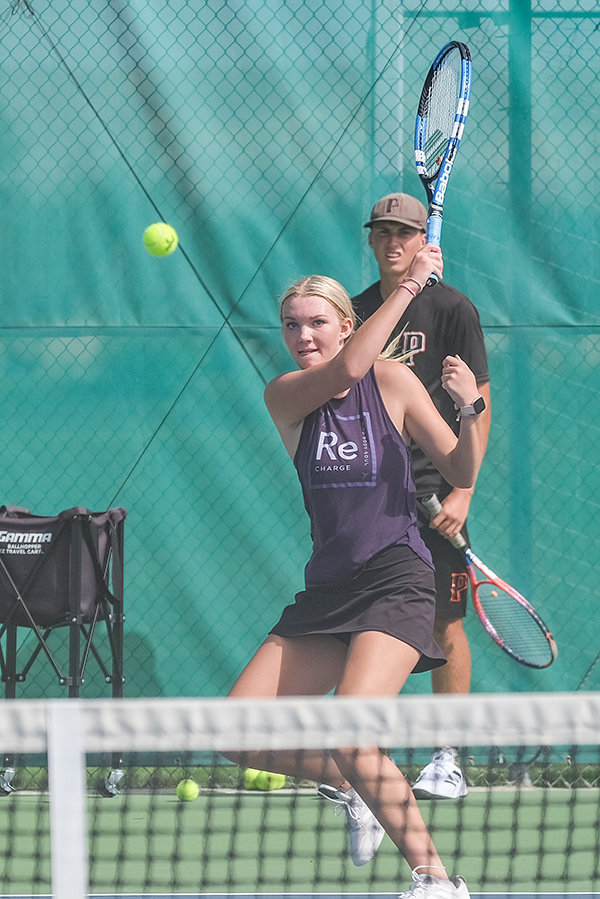 PHS senior Sydney Hull returns a shot during practice on Friday. Hull expects to be in the mix at the top for the Panthers as the Powell girls’ tennis team returns a wealth of experience.
Tribune photo by Seth Romsa 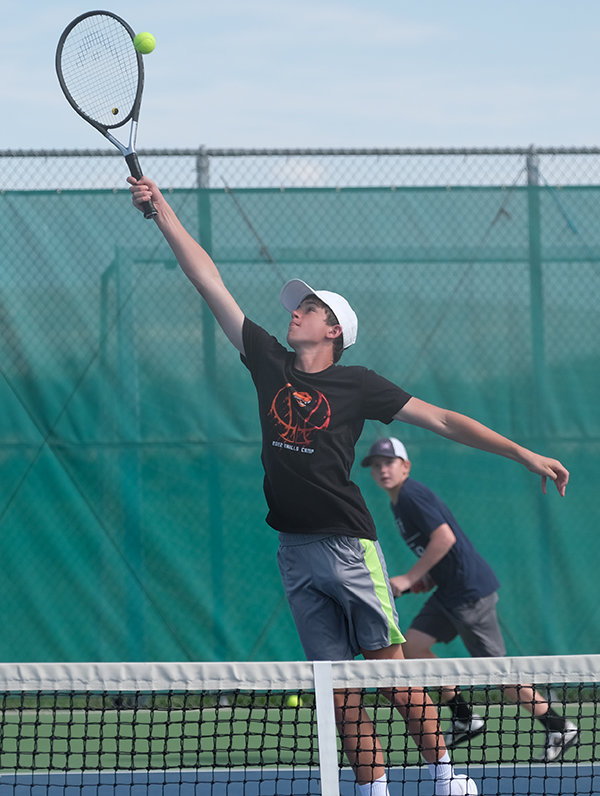 Freshman Taeson Schultz reaches up for a high shot at the net during practice on Friday. The Panthers will have numerous athletes stepping into bigger roles this season after graduating the top four players last year.
Tribune photo by Seth Romsa
Previous Next
Posted Tuesday, August 16, 2022 8:10 am
By Seth Romsa

Heading into a new tennis season the Powell Panther boys’ and girls’ tennis teams are at different ends of the spectrum — with the girls returning nearly its entire roster and the boys trying to replace its top four players from last year.

On the girls’ side, the Panthers return nearly its entire roster from last year, something Panthers tennis coach Joe Asay is excited for.

“It is going to be fun to see what the girls can do,” Asay said. “They have the potential to have a really solid season for sure.”

Returning for the Panthers in the top spot will be senior Chase Anderson, who will look to improve on her 1-2 record at the state tournament this year.

The one slot the Panthers will have to replace from last year will be No. 2 singles after losing Kaili Wisniewski to graduation this past year.

Two more seniors returning will be at the No. 1 doubles level with Sydney Hull and Hannah Hincks back on the roster.

Another duo of seniors in Alexis Terry and Alli Harp return from the No. 2 doubles pairing last year.

Junior Lachelle Lee and senior Tyler Sessions return from their roles on the No. 3 doubles squad, along with a host of other returning and new players hoping to be in the mix for varsity spots.

This year the Panther boys’ team will be looking for new leaders to take over both of the singles spots alongside the No. 1 doubles spot.

Those spots were vacated after the Panthers lost Ethan Bartholomew, Aiden Chandler, Kolt Flores and Logan Brown to graduation.

Hoping to step up to the challenge this year will be the duo who finished last year as the No. 2 doubles in junior Cade Queen and senior Wesley Preator.

The only other returning senior to the roster this year will be Kalin Hicswa who was part of the No. 3 doubles team last year.

“I hope that they learn to embrace it,” Asay said. “I think I just have two seniors, so those boys filling in those shoes are going to have some time in those positions these next couple of years.”

The Panthers do not get a lot of time to prepare for conference matches this year, opening up the first set of matches on Thursday at home against the two Gillette schools.

Typically Powell will start the season with a pair of non-conference opponents such as Rock Springs and Green River, but will be thrown in the deep end trying to find out where each player will play.

“That typically gives us a feel for things,” Asay said. “We go right at it on Thursday, we will still be trying to find out where people should be, but it is definitely time to get started.”

The first set of matches for Powell will be against Thunder Basin at 10 a.m. and the second set against Campbell County will be at 3 p.m.

Both sets of matches will be at PHS.

After the Gillette matchups, the Panthers will get the opportunity to play non-conference opponents on Friday and Saturday, heading on the road to Green River and Rock Springs.