A much improved season came to an end on Thursday, as the Panthers girls’ soccer team finished its season in Worland — dropping the contest to the host Warriors 5-1. 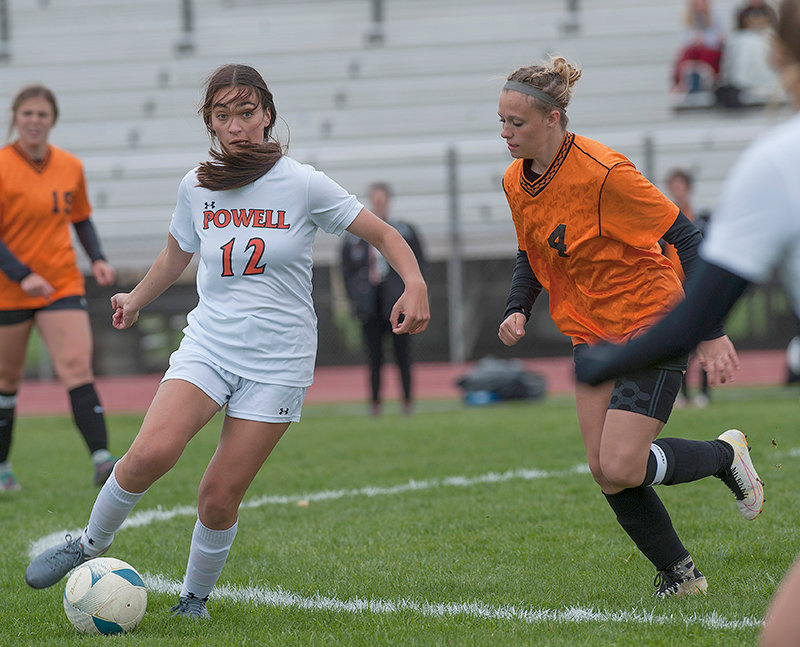 Applying pressure early in the first half, Panther sophomore Kenzie Fields dribbles the ball upfield. The Panthers dropped the final game of the season at Worland on Thursday but finished the season much improved.
Photo courtesy Alex Kuhn, Northern Wyoming News
Posted Tuesday, May 17, 2022 8:00 am
By Seth Romsa

A much improved season came to an end on Thursday, as the Panthers girls’ soccer team finished its season in Worland — dropping the contest to the host Warriors 5-1.

Powell got on the board first early on, as a corner kick found its way across the frame of the goal and hit a Warrior defender, bouncing into the back of the net to give Powell a 1-0 lead 4:35 into the game.

The Panthers continued to hold that lead over the next 10 minutes until a shot from distance by the Warriors found its way into the back of the net in an unconventional way.

The shot was blasted from 25 yards out and hit the crossbar, bouncing straight back into the field of play.

Panther goalkeeper, junior Taylor Sanfilippo, landed on the ground after an attempted save and the ball hit her in the back. The ball found its way into the back of the net, leading to an unfortunate conceded goal to make it 1-1.

The two teams continued to exchange possession over the next 20 minutes, as neither team could find the back of the net.

Worland took the lead on a volley just inside the box after a long through ball to make the score 2-1 with 5:00 left in the half.

Heading into the second half Powell, looked to regroup and attempted to tie the game.

Worland thought the lead had been extended early in the second half, but the goal was called for offside and the score remained 2-1.

Powell was unable to push the ball upfield early on, leading to a flurry of shots from the Warriors.

Worland extended the lead to 3-1 after a shot just outside the box snuck into the bottom corner of the net with 27 minutes left.

Five minutes later a bouncing ball was unable to be secured, and Worland put the ball into the back of the net to make it 4-1.

Worland scored its final goal with 18 minutes left, as a long free kick was put in the box and bounced around before the Warrior attack tapped the ball in to make it 5-1.

After the loss, the Panthers landed in the No. 6 spot in the 3A West. Powell finished with an identical record to Lyman but did not have a win over the Eagles during the season.

After the regular season finale the Panthers season wrapped up much improved from last year, but fell short of the ultimate goal of returning to the state tournament for the first time in five years.

This Panthers’ improvement showed in all facets of the game, as they ended the season with three more wins than last season. The team finished the season doubling the goal total of last season, with 10.

Heading into next season the Panthers will return a large majority of the team and bring up a talented middle school class that finished 4-1-1 this season.

Unfortunately for the Panthers one of the major losses is going to be on defense. Senior defenders Sarah Hampton, Abby Bradley, Sarah Dunkerley and Kabrie Cannon all graduate.