Opening the 3A Northwest conference slate on the road Friday and Saturday, the No. 4-ranked Powell High School boys’ basketball team split a pair of matchups — defeating Thermopolis on … 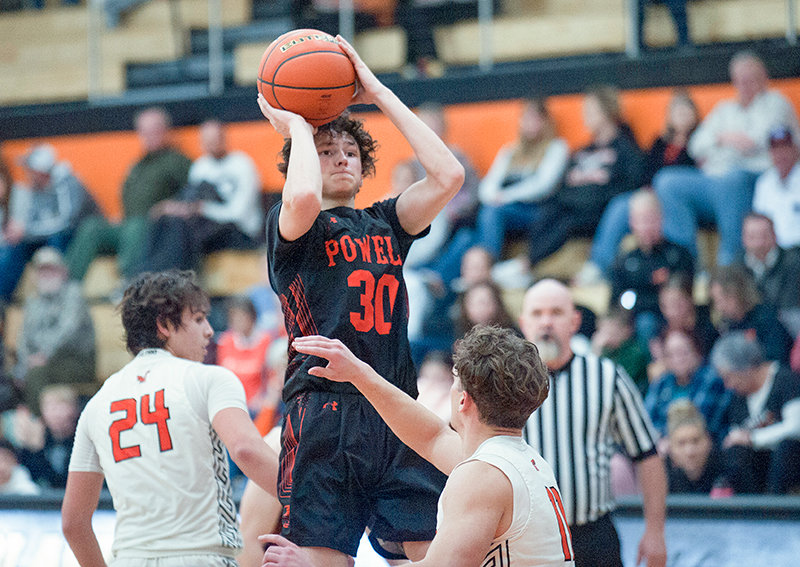 Gunnar Erickson puts up a shot over a Worland defender during the Panthers’ loss on Saturday. Erickson and the Panthers nearly rallied in the second half but came up short to start 1-1 in conference play.
Photo courtesy Alex Kuhn, Northern Wyoming News
Posted Tuesday, January 24, 2023 8:00 am
By Seth Romsa

Opening the 3A Northwest conference slate on the road Friday and Saturday, the No. 4-ranked Powell High School boys’ basketball team split a pair of matchups — defeating Thermopolis on Friday 85-59 before losing a tight contest to No. 2-ranked Worland 72-66 on Saturday.

Coming up against a strong press early, the Panthers were able to get some baskets to help relieve the pressure and hold a 12-7 lead midway through the quarter.

Despite the early success breaking the press, the Panthers only held a 21-19 lead going into the second quarter.

After holding a 23-21 lead, the Panthers were able to get steals and easy baskets to explode out to a 44-23 lead in the second quarter and lead 47-30 going into halftime.

“We were able to start getting a few more stops which didn’t allow them to get into their press as often,” coach Mike Heny said. “We also did a really good job of putting pressure on the dribbler and Brock [Johnson] was able to get a number of steals during that stretch and convert them on the other end.”

Powell took advantage early in the second half, pushing the lead to 22 within five minutes.

The Panthers continued to cruise from that point forward, finishing with an 85-59 victory over the Bobcats to start the conference schedule 1-0.

“Our goal is to take each game one at a time so we feel confident every time we step on the floor,” Heny said. “Playing offense like we did against Thermopolis really helped our confidence shooting the ball since we didn’t play our best on the offensive end against Lander the week before.”

After the strong opening victory Friday night, Powell made its way to Worland to take on the No. 2-ranked Warriors (9-3 overall, 2-0 3A Northwest) in a key early matchup in 3A Northwest.

Both teams started scoring slow in the contest, with a Gunnar Erickson 3-pointer making it a 7-6 game in favor of Worland with 3:30 left in the first quarter.

Worland maintained its lead after the first, taking a 13-10 lead into the second quarter.

Hot shooting in the second quarter allowed the hosts to pull away to a double digit lead, as the Panther defense struggled to get around screens to contest open 3-pointers by the Warriors.

“Worland is a really good team and they move the ball extremely well,” Heny said. “We weren’t playing ball screens as effectively as we normally do and our communication wasn’t very good. We need to be better at not overplaying the action and giving them an easy drive to the basket.”

Strong drives alongside the strong shooting allowed the Warriors to maintain that advantage, and take a 36-27 lead into the locker room.

Worland pushed the lead out to 13 with 3:38 left in the third quarter, before the Panthers cut into the lead and trailed 52-45 after the third.

“These kids will continue to play hard no matter what the score is,” Heny said. “We just talked about improving on the defensive end and we made a few changes to how we were attacking them offensively.”

Less than two minutes into the fourth, Powell cut the lead to 56-52 and made it a one possession game after a pair of Jace Hyde free throws made it 56-54.

However, the Panthers were unable to get a stop on the defensive end and Worland was able to hold off any attempts from Powell to take the lead and held on for a 72-66 victory.

“We know we have to be better defensively at the end of games against the better teams,” Heny said. “We couldn’t get the stop we needed at the end of the Lander game either so hopefully all these lessons are going to pay off when they matter most.”

Stats for both games were not available as of press time due to technical difficulties.

Powell returns back home this weekend to take on Lovell (5-6 overall, 0-1 3A Northwest) Thursday in another key early 3A Northwest matchup at 7 p.m. to start a five-game homestand.

“We are just trying to get better each day and we see areas where we need to improve the most,” Heny said. “Lovell is playing with a lot of confidence.”

After the game on Thursday, Powell will host rival 4A Cody (4-6 overall, 1-2 4A Northwest) on Friday at 7 p.m. looking for the season sweep over the Broncs after defeating Cody 51-49 in December.