Close games have been a common occurrence for the young Panther boys’ basketball team early in the season. After dropping tight contests to Cody and Rocky Mountain last week, the Powell High … 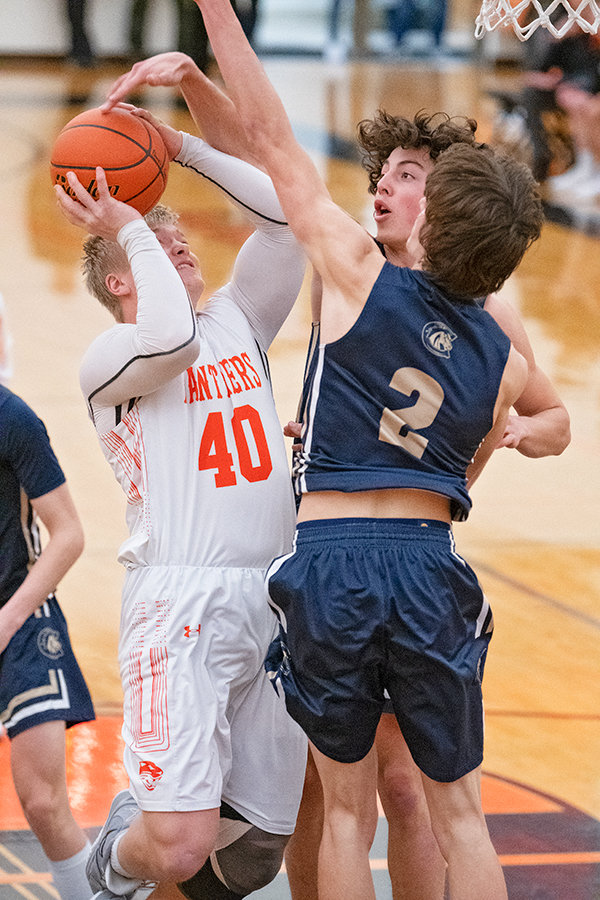 PHS senior Toran Graham fights against two Bronc defenders as he looks to finish at the rim during the Panthers’ Thursday contest against Cody. Graham scored 18 points and grabbed 13 rebounds, but the Panthers dropped the close contest, 53-49.
Tribune photo by Carla Wensky 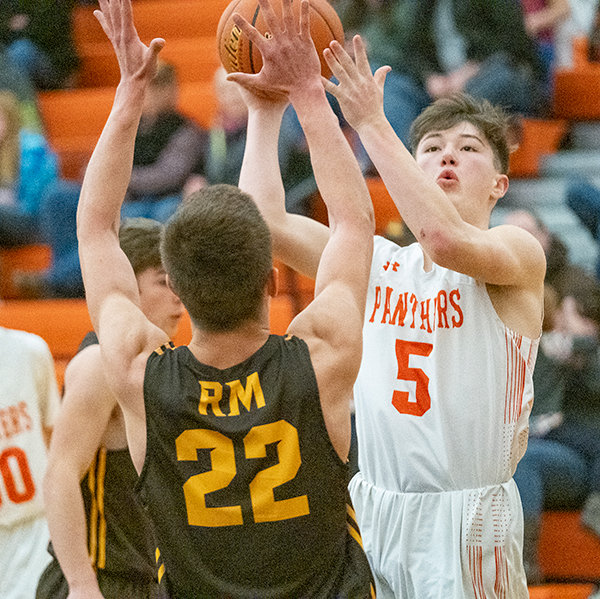 PHS sophomore Jhett Schwahn rises for a layup late in Saturday’s game against Rocky Mountain. The Panthers lost their fourth close game of the year, 38-37, against the Grizzlies.
Tribune photo by Seth Romsa
Previous Next
Posted Tuesday, January 11, 2022 8:00 am
By Seth Romsa

Close games have been a common occurrence for the young Panther boys’ basketball team early in the season. After dropping tight contests to Cody and Rocky Mountain last week, the Powell High School squad’s four losses have come by a combined total of just 13 points.

The Panthers (1-4) did not show any signs of rust early on as they welcomed rivals Cody (2-4) to Powell on Thursday.

PHS pounced at every opportunity early in the game, as they jumped out to a 15-4 lead going into the second quarter.

“Against Cody, we were really aggressive to open the game,” Panther head coach Mike Heny said. “Our intensity on both ends of the floor really allowed us to get going early. Toran [Graham]’s efforts on the boards got us going and I thought the other players really fed off of his energy.”

Graham had an efficient game for the Panthers, as he finished with 18 points to lead all scorers. He went 6-of-10 from the field and 6-of-7 from the free throw line, while adding 13 rebounds for a double-double.

In the second quarter, the Broncs forced Powell into turnovers, as Cody worked its way back into the game at 17-15. However, free throws by Gunnar Erickson helped spark the Panthers. They outscored the Broncs 8-2 over the final 2:30 of the half to take a 25-17 lead into halftime.

Cody came into the second half and began to pressure the Panthers with a 1-2-2 full court press.

The Panthers survived the storm early and extended their lead to 31-19 just two minutes into the third quarter. But a furious rally by the Broncs over the next three minutes brought the game within two points, at 31-29.

A 3-pointer by Cody later brought the game to 37-36 heading into the fourth quarter.

In the early goings of the final period, Cody took advantage of the young Panthers to seize a 43-39 lead. The Broncs ultimately used their high pressing ability and hit free throws to pull away from the Panthers, 53-49.

Heading into this year, the Panthers returned very limited varsity experience, and Heny knew his team would need to adjust to the varsity level.

“We definitely are still trying to figure out where all the pieces fit on this team,” Heny said. “We are very inexperienced in varsity action so I knew it was going to take some time for everything to come together.”

Returning after nearly a month break from competition also caused some drop off for the team.

The Panthers welcomed Erickson to his first varsity experience of the year, after he recovered from a broken hand. He joined Graham in double-digit scoring with 10 points, and also finished with 11 rebounds for a double-double.

Going into Saturday night, the Panthers were looking to rebound and end their three-game losing streak.

The contest between the Panthers and the No. 3 ranked 2A Grizzlies (5-2) started out close and stayed that way throughout as the two teams battled back and forth.

Neither team was able to find the basket early, as Powell led just 8-3 after five minutes of play.

The two teams battled to a 10-10 tie in the first quarter.

The second quarter was not any easier for either team, as they could not get the lid off the rim. Rocky led 19-14 at the half.

“The long layoff had a lot to do with our poor shooting and sloppy turnovers in the two games,” Heny said. “Game shots and game pressures are difficult to simulate in practice so we were having a tough time making shots and taking care of the ball at times.”

The Panthers came out in the second half and battled back to lead 24-22 going into the fourth quarter.

Both teams were able to find some scoring in the fourth quarter, with Powell up 35-34 with two minutes remaining. However, a basket by Rocky gave them a 38-37 lead with 15 seconds remaining and one last chance for the Panthers.

A 3-pointer by Zach Ratcliff hit the front of the rim, and the Panthers dropped the contest 38-37 to fall to 1-4 on the season.

“Losing these early games will certainly make us better as we head into conference play,” Heny said. “I would rather be learning these lessons early with this inexperienced team than getting into a situation for the first time later in the season during conference play or regionals. We have had a lead and could definitely be 5-0 if things had gone our way, but that may not have been the best situation going forward.”

The Panthers will head on the road this weekend, as they travel to the Big Horn Basin Tournament on Friday and Saturday.

On Friday, Powell will face Wind River at 3 p.m. and Burlington at 6 p.m. at Thermopolis High School. Junior varsity games are set for 1:30 p.m. and 4:30 p.m. at the middle school.

Games on Saturday will be determined by Friday’s results.

“Learning how to finish games is one of those things that just comes with experience,” Heny said, “and we will continue to work towards making the right decisions when it matters most.”