Hours before the first Park County Music Festival, dozens of runners, walkers and their canine counterparts braved burdensome winds Saturday morning for the “bring your dog” 5K race to … 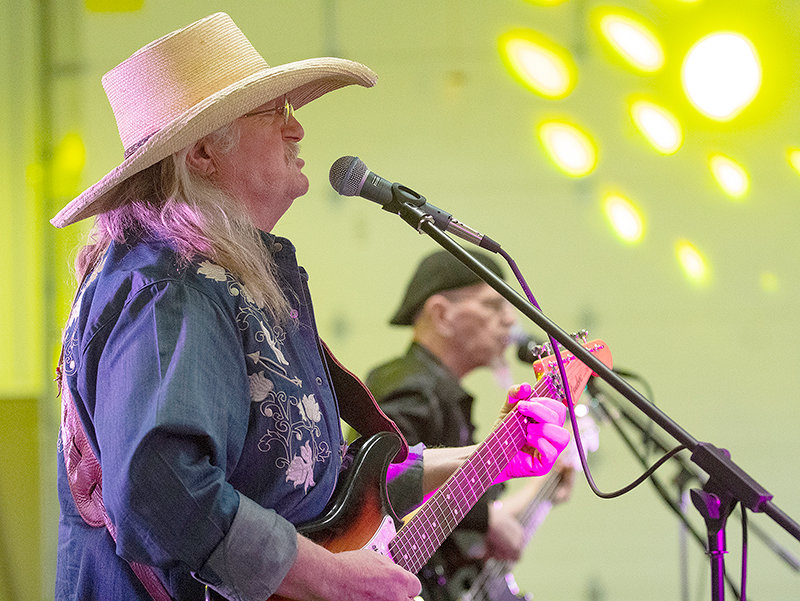 The Elk River Band out of Billings, Montana, performs at the Park County Music Festival at the fairgrounds Saturday. Several bands played at Heart Mountain Hall after the festival kicked off with a 5K run in the morning.
Tribune photo by Mark Davis 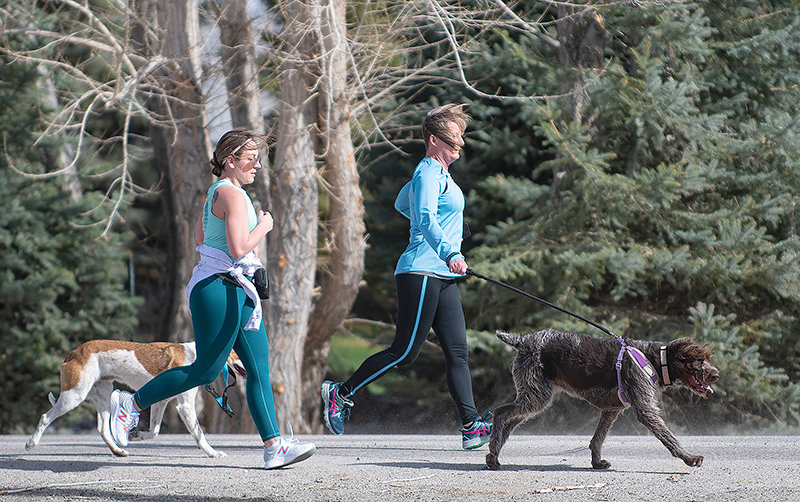 Denise Catlin and Cassie Riel participate in the 5K run with their dogs, Sage and Copper. They were the first to bring their pups to cross the finish line.
Tribune photo by Mark Davis
Previous Next
Posted Thursday, May 12, 2022 8:25 am
By Mark Davis

Hours before the first Park County Music Festival, dozens of runners, walkers and their canine counterparts braved burdensome winds Saturday morning for the “bring your dog” 5K race to kick off the festival.

Departing on Day Street, the crowd and their pups worked their way around the course while the wind whipped up dust and challenged water station attendants on Panther Boulevard. Attendants were forced to constantly chase down fly-away supplies while jamming to classic rock music on the stereo.

The 1979 version of “My Sharona,” by The Knack, played while Andy Morillon, who traveled to Powell from Teton County, sped to the station for a quick drink of water while several Dixie cups took flight across the roadway. He was well out in the lead, with the closest competitor 400 yards behind.

Morillon opened up his lead as he ran down 4th Street before taking a turn through the south entrance to the Park County Fairgrounds. Unfortunately his turn was premature and Powell’s Katie Griffin, who is better acquainted with the neighborhood, was able to pass. She crossed the finish line about 40 yards before Morillon could fix his mistake.

Griffin didn’t let the opportunity to finish first get in the way of her hometown hospitality, conceding the race to the runner from Jackson.

“He won,” she said emphatically. “He was in the lead the entire race.”

Meanwhile, Denise Catlin, a librarian and robotics teacher at Powell Middle School, saw her chance at the podium slip away when Sage, her German Wirehaired pointer saw an opportunity to cool down in a water-filled ditch and refused to budge while runners passed her and running partner Cassie Riel with her pooch, Copper. The two were the first to cross the finish line with pups in tow.

By 2 p.m., those in attendance were ready to rock. The music festival was held in Heart Mountain Hall because of weather concerns. Nine bands from around the region took turns on stage while a sizable crowd enjoyed the music, food and beverages.

The entire event benefited Downrange Warriors, a private charity dedicated to assisting members of the U.S. Armed Forces with Post Traumatic Stress Disorder (PTSD), according to Terry Bray, who helped organize the events.

“Their mission is to prevent veteran suicide,” Bray said. “They help [former service members] reintegrate into civilian life after coming out of the military and then coming back into civilian life in a totally different line of work.”

Several veteran’s service dogs were also in attendance at the event. The service dogs were trained by Northwest Battle Buddies. The group empowers combat veterans with PTSD by partnering them with professionally trained, specifically matched service dogs.

There is no cure for PTSD, according to the group, but service dogs can reduce PTSD symptoms with life-changing results. “With a canine Battle Buddy by their side, veterans with PTSD can regain their freedom and independence,” the group announced on their online site.

“Many of our service dogs are rescued from animal shelters. All our service dogs spend seven-plus months in intensive training, then are carefully matched with a veteran handler for five more weeks of training and bonding, creating the ultimate partnership.”