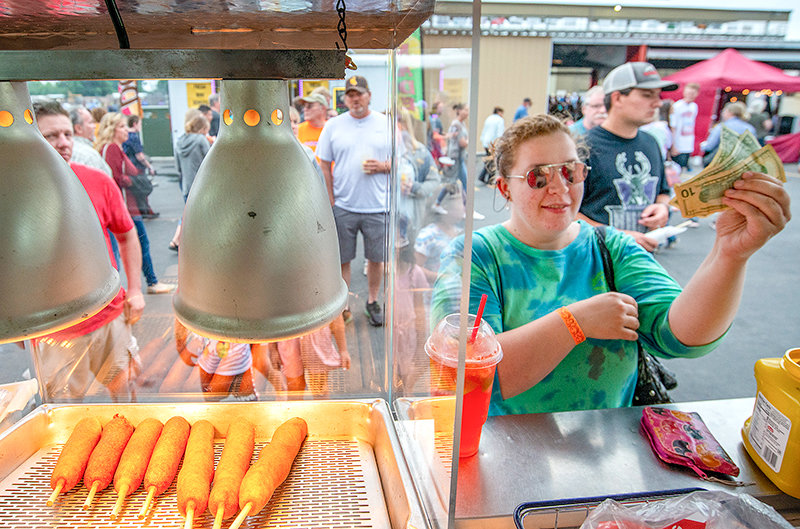 Destiny Stuebner, of Powell, pays for her carnival food at the Park County Fair Friday night. Many vendors saw strong sales this year, according to fair organizers.
Tribune photo by Mark Davis 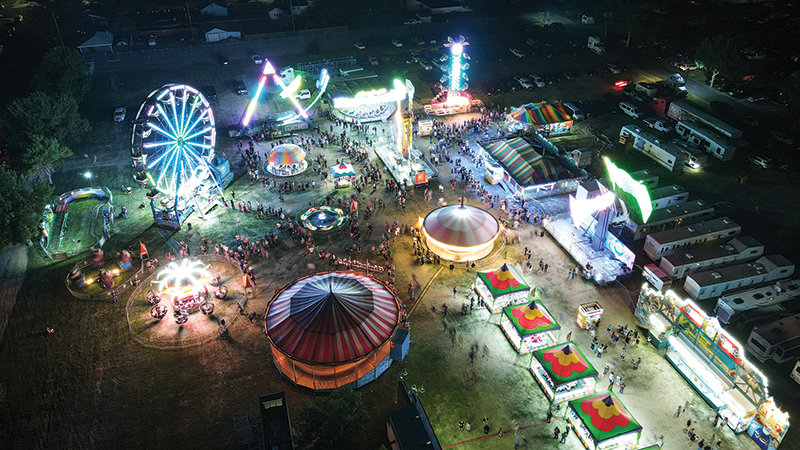 The Park County Fair’s midway and carnival lit up Powell’s skies Friday night, as crows returned to the fairgrounds after a COVID-disrupted 2020. This shot was captured from a drone flying 160 feet off the ground.
Tribune photo by Kevin Killough 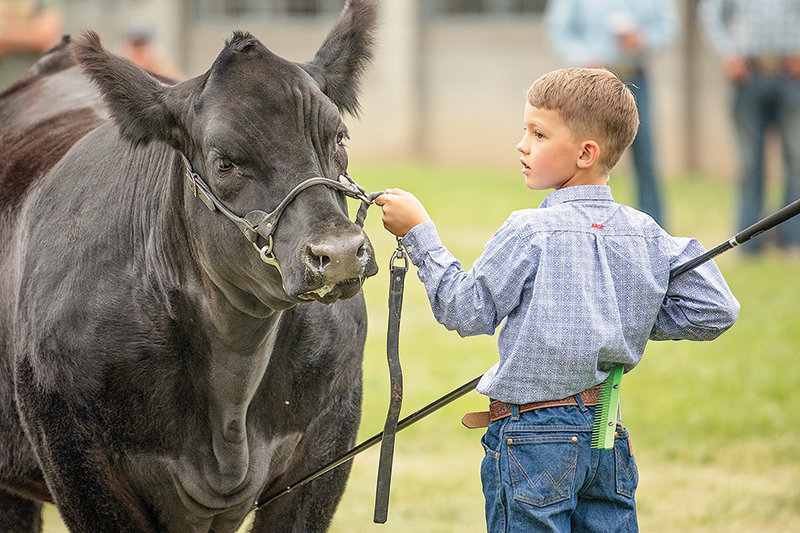 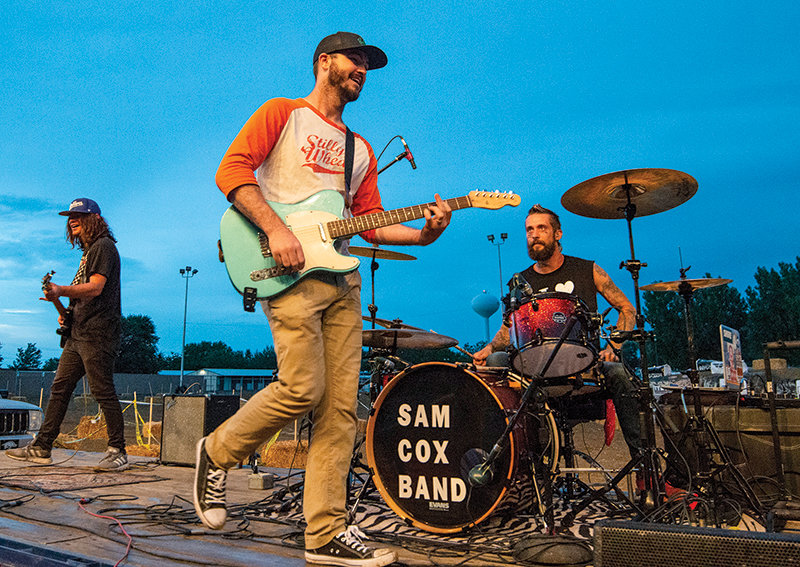 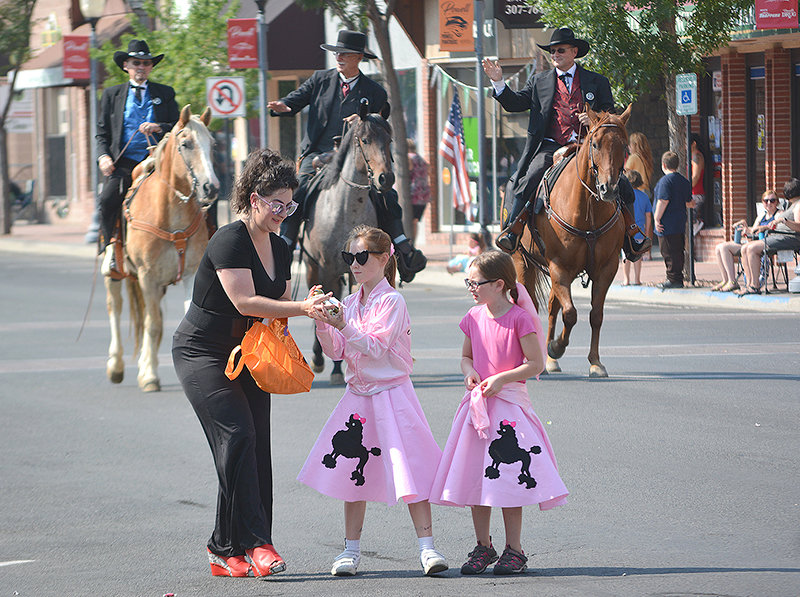 From left, Trish Moulton, Zaphira Paul and Solana Moulton prepare to hand out goodies along the fair parade route Saturday morning. Young spectators had ample opportunities to grab candy and swag during the annual parade, which was sponsored this year by Dano Youth Camp.
Tribune photo by CJ Baker 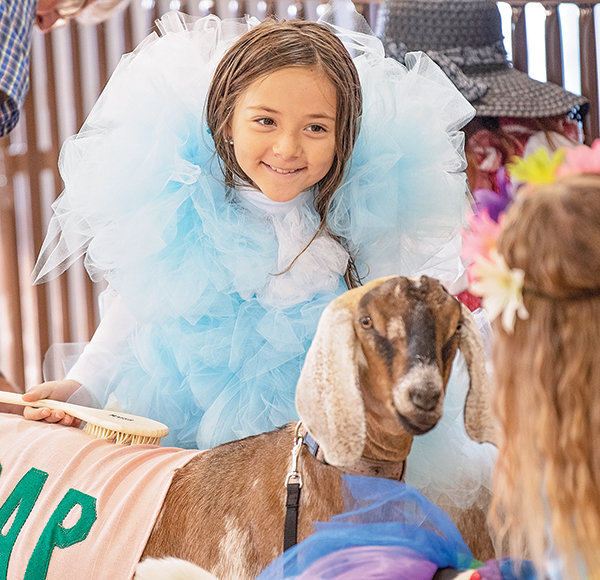 Jade Miller is all smiles as a loofah and soap Friday morning during ‘Dress a Goat.’
Tribune photo by Carla Wensky 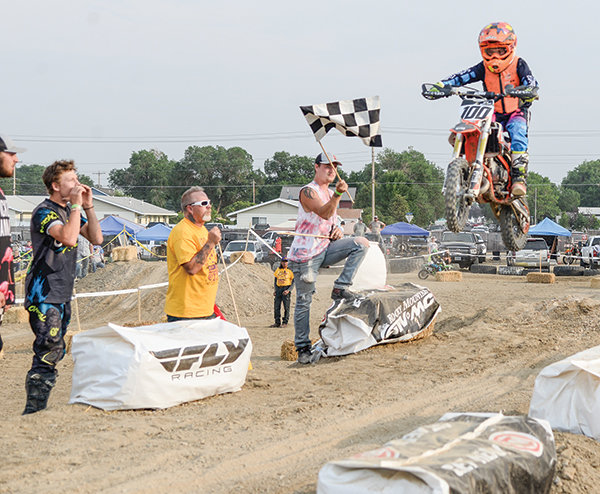 Max Williams flies through the finish line in Friday’s Race4Recovery motocross event. Williams won first in the Super-Mini A65cc and 10cc class, as well as the 85cc A class.
Tribune photo by Kevin Killough 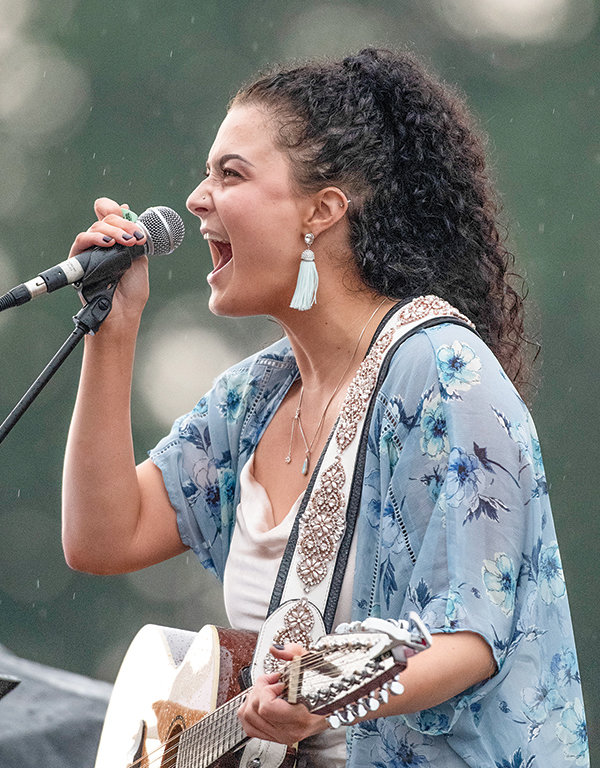 Powell resident Tia LeeAnn Ibarra was the opening act for the Sam Cox Band Thursday night. She played several originals and a few cover tunes amid the rain.
Tribune photo by Mark Davis 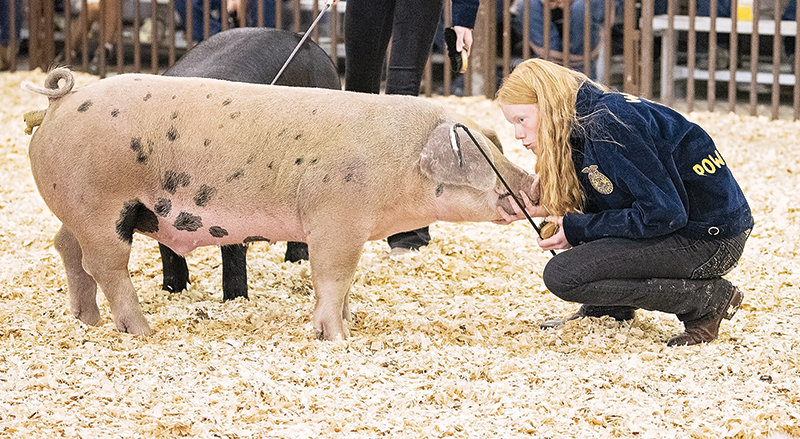 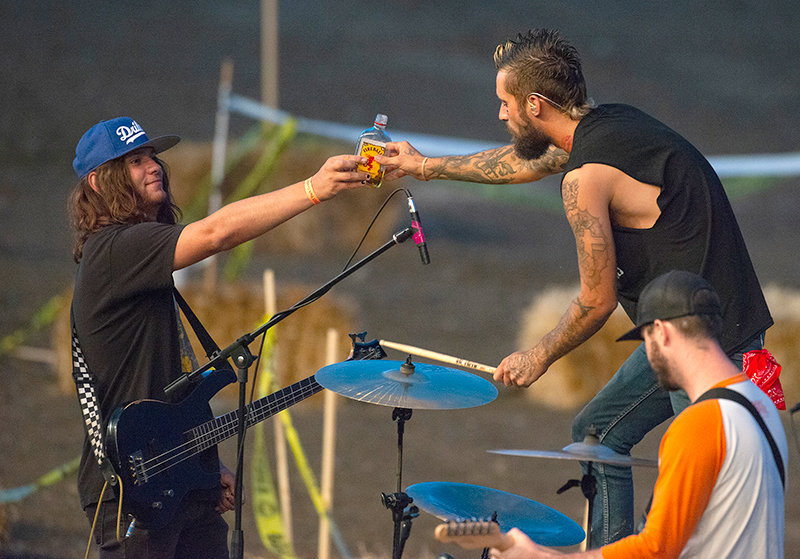 Sam Cox Band members Josh Searan and Dillon Escue share a bottle of Fireball Cinnamon Whisky during their Thursday performance at the Park County Fair. Fair leaders chose a less expensive act for this year’s concert and ‘we suffered the consequences of that,’ said Park County Buildings and Grounds Superintendent Mike Garza.
Tribune photo by Mark Davis
Previous Next
Posted Tuesday, August 3, 2021 8:25 am
By CJ Baker

“I think part of that is just because we didn’t have one last year,” Garza said. “People just wanted to be out and they had some money to spend and they just wanted to do something normal. And so they did.”

While Thursday’s headlining concert fizzled and Wednesday’s American Ninja-inspired challenge didn’t draw the participation levels fair organizers had hoped, pig mud wrestling proved as popular as ever on Tuesday, the motocross drew somewhere around 1,000 spectators on Friday and Saturday’s Demolition Derby once again sold out. The carnival, meanwhile, reported more than $236,000 in sales and the Junior Livestock Sale again saw success.

“For the most part, the fair went pretty well,” Garza said.

As Powell’s biggest event of the year, the fair brings a relatively large number of people to town, which sometimes is accompanied by an uptick in disturbances, crimes and arrests.

Powell Police Chief Roy Eckerdt said the week was busy for his department, but it was without any major incidents, even with the fair bustling on Friday and Saturday.

He added that overall, “people were in a good mood and conversational — and it was good.”

The chief said police did recover a stolen trailer amid Saturday’s Demolition Derby. Eckerdt said a driver brought his derby car in on the trailer, where someone recognized it as being stolen. Police also found that the truck pulling the trailer was carrying stolen license plates, Eckerdt said.

The man “took off” after being confronted by a citizen about the trailer, he said, but police are on the case.

Fair leaders had to overcome some hurdles in the run-up to last week’s event, including the firing of the fair’s primary organizer in June and a tight hiring market. The county struggled to find people to work the gates — ultimately getting a hand from volunteers from Powell Valley Healthcare — and wound up hiring a private contractor, Roselli Cleaning Services, to do the custodial work. Meanwhile, Garza had just three workers on his summer crew, which is half the usual number.

Garza praised PVHC for the “huge, huge help,” Roselli for the good price and the county’s crew.

“We made it work, but a lot of us had to do double and triple duty. We got through it,” he said.

In one unwanted change, the number of exhibits sank from prior years. Garza thinks part of that may be due to the fair following the lead of other counties and switching from a printed fair book to an online-only format.

“People were just struggling,” he said. “Not everybody is really, you know, internet [or] computer savvy.”

The fair board is already discussing possible changes for next year.

Fair leaders may also rethink their approach to the headlining concert. In an effort to keep costs down, fair leaders went with a lesser known artist, the Sam Cox Band of Tahlequah, Oklahoma, which only charged the county $1,500 plus lodging. That’s a fraction of the tens of thousands of dollars the county has been charged by bigger-name performers like the Nitty Gritty Dirt Band, Keith Urban and Jo Dee Messina — and it had Garza thinking the county would make a significant profit.

Instead, only about 100 tickets were sold ahead of Thursday’s show, “and I don’t think everybody that bought tickets even showed up to it,” Garza said. “I know they didn’t all stay.”

While that night’s rain put a damper on things, “there were some other issues that drove the crowds away,” he said.

Garza praised two of the three members of the Sam Cox Band, but said its drummer made crude gestures during the show and urinated near the trailer that served as the stage.

After the performance, the man also caused a disturbance at the fair’s beer gardens and Powell’s K-Bar, with police responding to both incidents, said Chief Eckerdt.

Eckerdt noted that a drummer from another band performing at the fair also ran into trouble, being trespassed from the fairgrounds.

“It was a weekend for drummers,” Eckerdt deadpanned.

Garza said one of the lessons from Thursday’s concert was that, “sometimes saving money isn’t always the very best decision.”

The Park County Fair Advisory Board will hear a more detailed recap of the fair — and start planning for the 2022 event — at its upcoming meetings.