The Powell High School boys’ soccer team’s most recent game against Cody was much closer than the rivals’ first meeting of 2021, but it was a win, nonetheless. 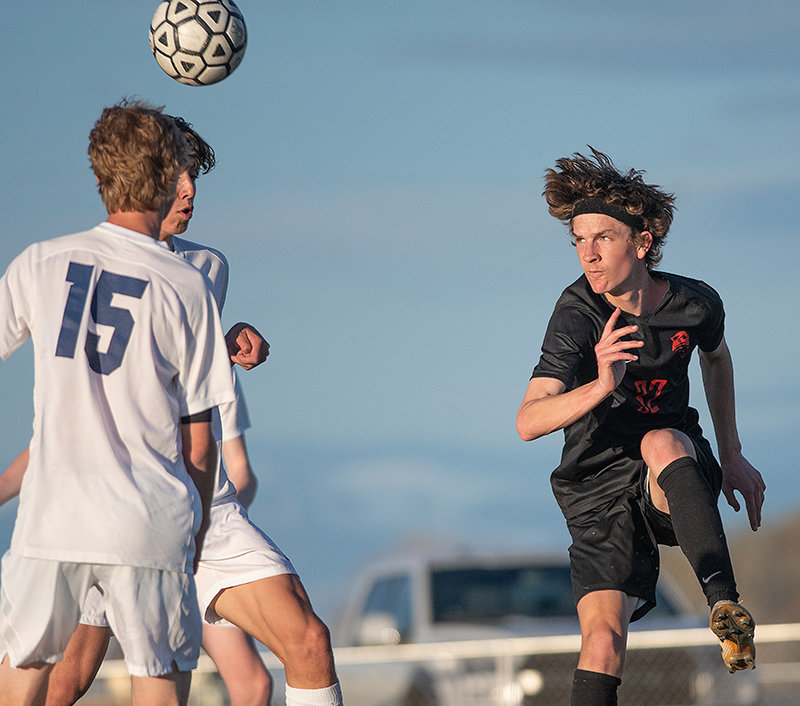 Junior Garrett Morris goes for a header Thursday in Powell’s 3-1 win over Cody. The Panthers, who have lost just once this season, have three regular-season games remaining.
Tribune photo by Carson Field 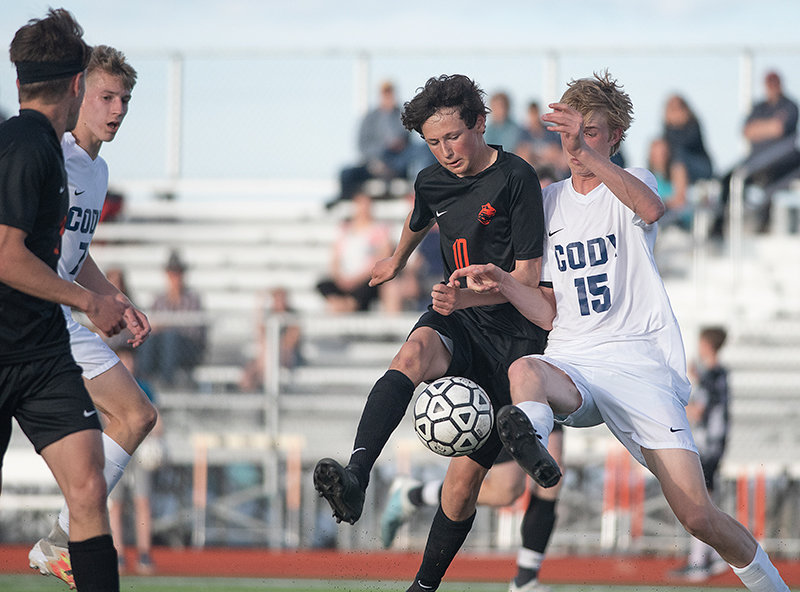 PHS freshman Gunnar Erickson fights for a ball with Cody’s Tucker Lynn Thursday. While the Panthers earned their 10th win of the year, head coach David Gilliatt described the game’s second half as disappointing.
Tribune photo by Carson Field 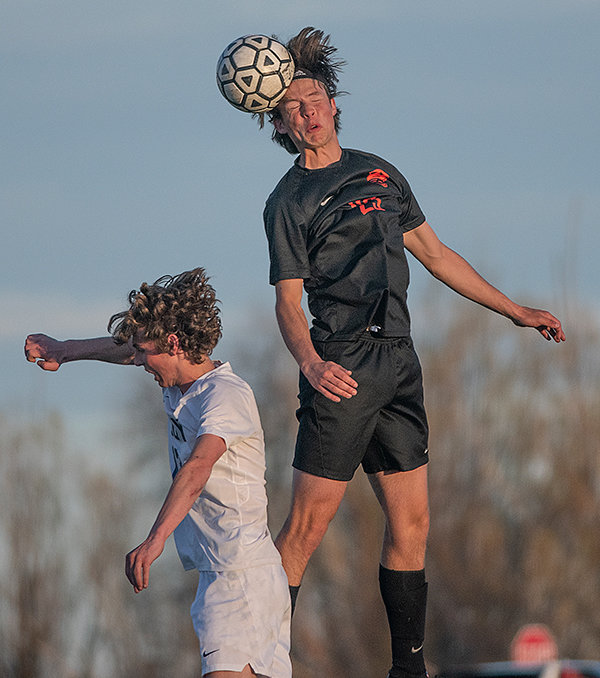 Landon Sessions heads a ball Thursday against Cody. Head coach David Gilliatt singled out Sessions as a defensive standout in the win.
Tribune photo by Carson Field
Previous Next
Posted Tuesday, May 4, 2021 8:20 am
By Carson Field

The Powell High School boys’ soccer team’s most recent game against Cody was much closer than the rivals’ first meeting of 2021, but it was a win, nonetheless.

The Panthers upended the Broncs 3-1 for a win on senior night. The Panthers are now 10-1 overall with three matches remaining.

All 11 of Powell’s active seniors — Jesse Trotter, Jack Pool, Adrian Geller, Lane Franks, Sam Bauer, Landon Sessions, Matthew Hobbs, Alex Martinez, Ashton Brewer and Trevor Groves — made up the starting group. For a group that got stripped of one season because of COVID-19, having the chance to take the pitch together under the lights at Panther Stadium was special.

“I’m very proud of them,” head coach David Gilliatt said. “We didn’t get to have last season, so I’m fortunate that we’re able to share this year together now.”

But seeing them all together gave the coach a picture of what he’ll lose next year.

“It’s great to be able to do that, but it’s also kind of a daunting realization that you’re going to lose 11 good players,” Gilliatt said. “It’s a group that’s been together for a very long time, and making that realization is a little frightening.”

After giving the seniors several minutes together on the pitch, the coach inserted a few of the underclassmen starters into the lineup. Shortly after, Trotter got the Panthers on the board, scoring on a one-on-one with the CHS keeper.

Powell added two more goals to its lead, scored by Hawkin Sweeney and Sam Bauer, giving the Panthers a 3-0 lead with 15 minutes left in the first half.

“I think the first half, we played our game,” Gilliatt said. “We just played intelligently and played with good intensity.”

The tides of the match turned with 10 minutes left in the half, however. Cody’s Jackson Gail snuck one past Brewer, Powell’s goalkeeper, to get the Broncs on the board. Gail appeared to undercut and make contact with Brewer on the play, leading several players to dispute the call with the officials, but it stood.

After the CHS goal, the Panthers’ play deteriorated. They failed to score another goal the entire game and controlled the possession for less time in the second half than they did in the first half.

According to Gilliatt, complacency and increased motivation from the Broncs led to Powell’s dismal second half.

“We resorted to just kicking the ball,” he said. “We didn’t play with the same level of intensity and failed to take them completely out of the game.”

The Panthers’ first-half effort was enough to escape with a win. Still, the game left a bitter taste on a memorable night.

“Honestly, I went home feeling like we lost,” Gilliatt said. “Even though we won, I had a hard talk with them after the game.”

The coach did point out a few individuals who were exceptional in the two-goal win. He credited the entire back line — including Landon Sessions, who “played his best game.” And Gilliatt was also pleased with Brewer’s performance in goal, as well as Garrett Morris’ all-around effort.

This week, PHS plays road games against Mountain View (6 p.m. Friday) and Lyman (noon on Saturday) before a May 14 match against No. 1 Worland. As the regular season winds down, Gilliatt hopes the somewhat disappointing performance against Cody is a chance for his squad to grow.

“It’s good for us to see what happens when you get outworked,” Gilliatt said. “If we want to win at state, we have to play our game in both halves.”