A break from conference opponents presented itself to the No. 5-ranked Powell volleyball team on Tuesday, as the Panthers defeated Red Lodge 3-1 at home. 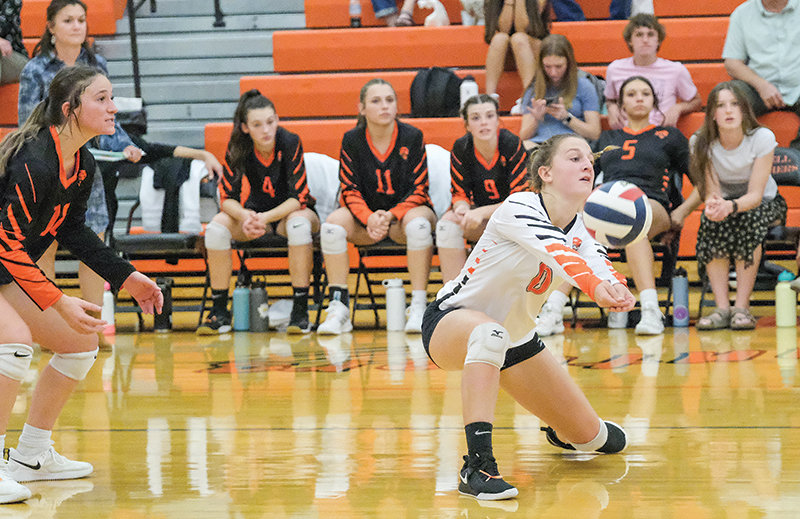 PHS sophomore libero Alexa Richardson (right) digs a ball while teammate, senior Mikayla Graham, waits in anticipation for the next play. Powell heads to Lander for the 3A West Conference Duals this weekend.
Tribune photo by Seth Romsa 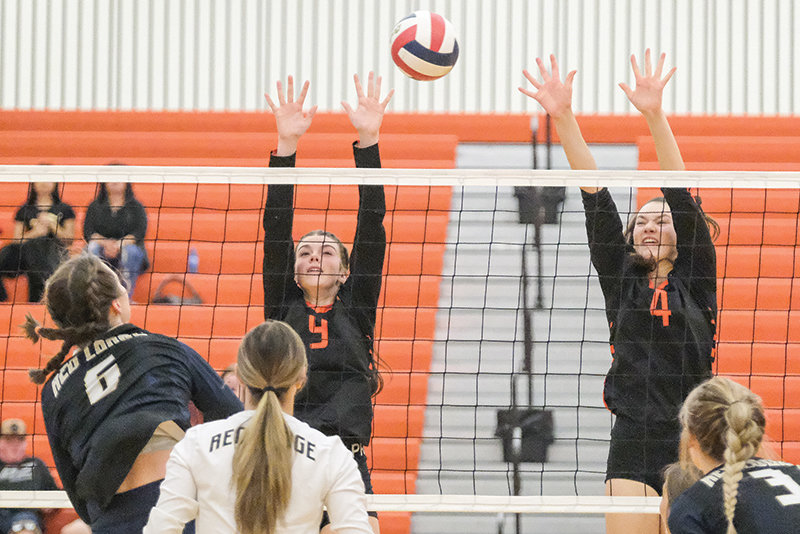 Gracie Trotter (left) and Saige Kidd go up for a block in the second set against Red Lodge on Tuesday.
Tribune photo by Seth Romsa
Previous Next
Posted Thursday, October 6, 2022 8:25 am
By Seth Romsa

A break from conference opponents presented itself to the No. 5-ranked Powell volleyball team on Tuesday, as the Panthers defeated Red Lodge 3-1 at home.

Strong starts have been a weakness for Powell thus far, but the Panthers (13-6-1 overall, 3-0 3A Northwest) started strong behind dominant net play, jumping out to a 6-1 lead.

Powell extended the lead to 15-4 on a Gracie Trotter kill, forcing a timeout from the Rams.

Finishing out the set strong, Powell sealed a 25-11 win hoping to set the tone for the rest of the match.

In the second set, receiving service started to become a problem, leading to an early 10-4 deficit.

Powell tightened the score in the middle of the set, but Red Lodge pushed the lead back to 20-14.

“Our serve-receive was a lot better in the first set,” coach Lesli Spencer said. “That went down a little bit in the second set and especially in the third set. That is always a major focus, making that serve-receive, it makes your chances a lot better to get that point.”

Needing an answer, Powell rallied off seven of the next eight points — tying it at 21 on another Trotter kill and took the lead on a hit into the net by the Rams.

The Panthers finished the comeback with a 25-23 second set win.

Powell started the third set strong looking for a sweep, but let the Rams back in the contest — leading to a timeout with the score tied at 15.

Anna Bartholomew finished a kill out of the timeout to keep the lead, but it went back and forth until Powell led 20-19.

After a Red Lodge timeout, the Rams scored the next six points to take the third set 25-20.

In the fourth set, Powell led early 10-6, and held the lead until Red Lodge tied it at 17 forcing a timeout from Spencer.

Powell answered out of the timeout, finishing the match on an 8-2 run to take the match 25-19.

Powell now gets a chance to compete with the rest of the 3A West, heading down to Lander to take part in the 3A West Conference Duals on Friday and Saturday.

“I am excited to see how we go up against those teams,” Spencer said. “To this point in the season we have been focusing on what we can do. Now we need to check and see if there are any weaknesses or holes in the systems they run so we can adjust a little bit.”