Fast greens led to some early struggles for the Panther golf team on Tuesday in Cody, but strong recoveries helped Powell improve in the early season.

Junior Will Jackson led the way for the … 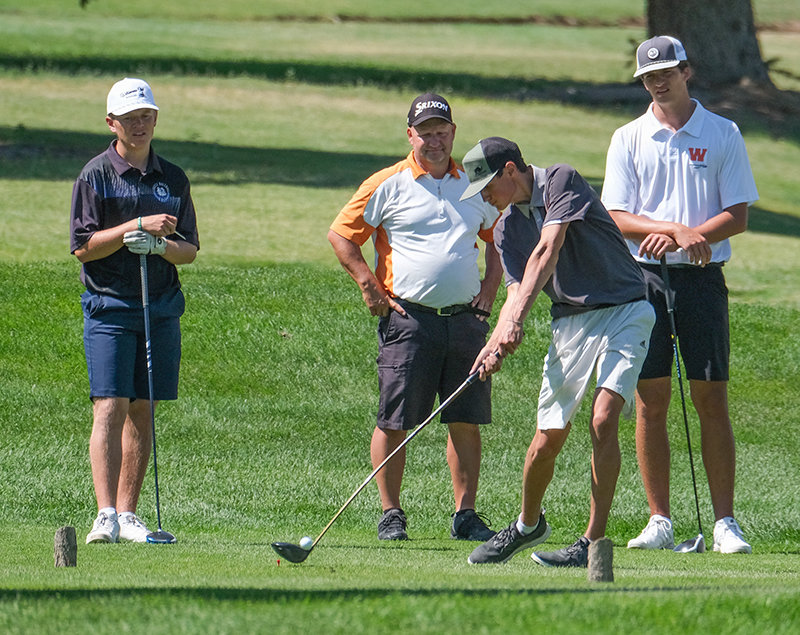 PHS junior Gunnar Erickson tees off the ball in front of his competitors during the first round of the Cody tournament on Tuesday.
Tribune photo by Seth Romsa
Posted Thursday, August 18, 2022 8:10 am
By Seth Romsa

Fast greens led to some early struggles for the Panther golf team on Tuesday in Cody, but strong recoveries helped Powell improve in the early season.

Junior Will Jackson led the way for the Panthers on the day — posting a career best 86.

“Will [Jackson] played well last week in Powell and stepped it up another notch during round one in Cody,” Panther golf coach Troy Hildebrand said. “His 86 is a career best and he is doing an excellent job of keeping the ball in play and minimizing any mistakes.”

Sitting just one stroke behind Jackson after the first day of action was fellow junior Gunnar Erickson who continued his strong start to the season.

Hildebrand said that Erickson had some early putting struggles but battled back to have a strong round.

Tying for the third best score on the team were juniors Andrew Jones and Isaiah Woyak who both finished with a 92.

Hildebrand said that both players made great progress in the few days after the opening tournament in Powell, and he hopes they can both build on their improvements moving forward.

Rounding out the top five scores for the Panthers after day one was senior Seth Siebert who finished with a 94.

“Seth did an excellent job of keeping his round together when he had some tough holes,” Hildebrand said. “That is a great step forward in his game from past seasons and bodes well for where he could end up this year.”

Junior Parker Williams finished sixth on the roster for the Panthers, coming in with a score of 101.

Sophomore Jackson Hill rounded out the scores on the boys’ side for the Panthers, finishing with a 102.

Freshman Coy Erickson showed improvement in her third career round, finishing with a 115.

“Coy was playing Cody for the first time ever and she came out and shot the best round of her career to date by seven shots,” Hildebrand said. “She also recorded her first ever birdie during the round which is a great accomplishment. She is figuring out tournament golf a little bit more each round.”

After the first round of the tournament the Panthers sat in fourth place as a team, just behind leaders Worland, Lovell and Sheridan.

The Panthers were slated to return to Cody on Wednesday, with the second round of the tournament concluding after press deadline.

Read a full tournament recap in the Aug. 23 edition of the Powell Tribune.