An early season slump had the young Powell High School boys’ basketball team sitting at 1-4 going into the Big Horn Basin Tournament in Thermopolis/Worland, but an offensive outburst helped the … 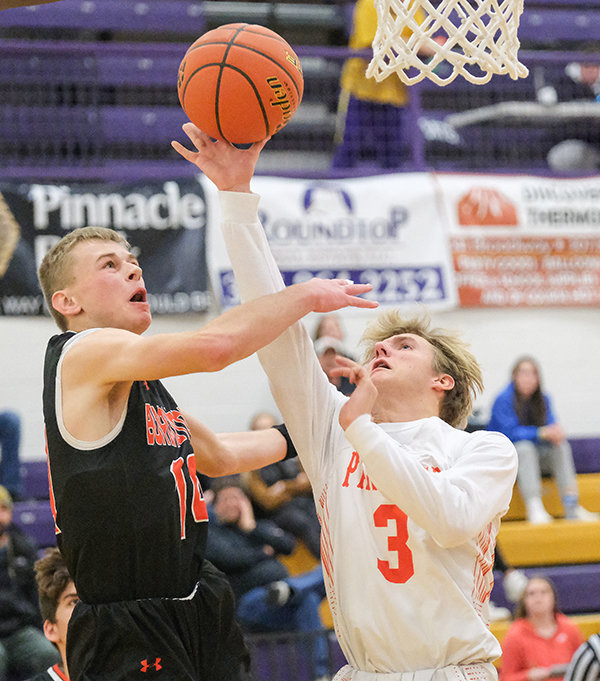 PHS senior Keaton Rowton puts up a layup against a Burlington defender during their matchup on Friday night. The Panthers went 3-1 during the Big Horn Basin Classic in Thermopolis, falling in the championship game against Worland.
Tribune photo by Seth Romsa 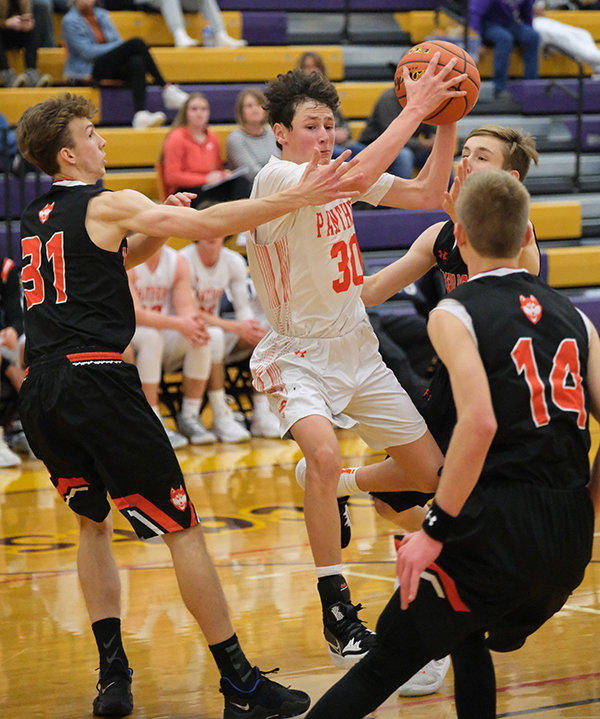 PHS sophomore Gunnar Erickson gathers the ball into a jump stop in the second half against Burlington. The Panther offense took a jump this past weekend as the young team continued to develop heading into conference play.
Tribune photo by Seth Romsa
Previous Next
Posted Tuesday, January 18, 2022 8:20 am
By Seth Romsa

An early season slump had the young Powell High School boys’ basketball team sitting at 1-4 going into the Big Horn Basin Tournament in Thermopolis/Worland, but an offensive outburst helped the squad win three straight before falling to Worland in the championship game.

After playing to a 9-9 tie in the first three minutes, the rest of the first quarter did not go well for the Panthers.

Wind River finished the period on a 17-4 run to take a 25-13 lead into the second quarter.

However, the next period belonged to the Panthers.

Trailing 28-15, a steal by senior Zach Ratcliff and an extended possession led to a bucket by fellow senior Toran Graham. That basket by Graham sparked a 19-0 run to finish the half, as the Panthers did not allow Wind River to score a point the final 6:30 minutes of the period. It sent the Panthers into the locker room with a 34-28 lead.

“I knew the kids were right on the edge of breaking out offensively,” Panther head coach Mike Heny said. “As a team, we were shooting and scoring well during practice and we just had those first two games after break that were a struggle. It’s just a matter of seeing a couple go in during the games.”

The momentum carried into the second half, as the Panthers came out on a 15-4 run and led by as many as 22 points in the third. They outscored Wind River 45-11 over the second and third quarters and finished the fourth quarter strong to take down Wind River 70-48.

In Friday’s second game, the Panthers came up against Class 1A Burlington (1-8). Both teams came out with intensity as the game turned into a track meet, running up and down the floor.

Powell took a 13-11 lead going into the second quarter and pushed it to 20-13 before Burlington responded and brought the game within three points with 2:11 remaining in the half.

Powell pushed the lead back to 33-25, though a basket at the buzzer by sophomore Marshall Lewis was waived off by the refs.

A strong third quarter by Powell was sparked by moving the ball and finding open shooters, extending the lead to 46-29 halfway through the period.

“The improvement in our ball movement mostly helps with taking the pressure off the shooters,” Heny said. “We got a lot more open looks this weekend because of our spacing and our ability to find the open player. As we continue to develop, all the players will benefit and will have to learn to make shots in key situations.”

The Panthers outscored Burlington 22-11 the rest of the third quarter and used the momentum to cruise to an 81-51 victory.

Saturday’s semifinal matchup would not be easy, as the Panthers took on hosts Thermopolis (6-4), with a spot in the championship game against Worland on the line.

A fast start by the Panthers helped them build a 15-7 lead going into the second quarter. A 3-pointer from Thermopolis made it a one point game, but with the Bobcats attempting to seize the momentum, PHS sophomore Gunnar Erickson answered with a trey of his own to make it a four-point advantage again.

Powell continued its improved ball movement and took a 31-25 lead into halftime, then came out firing in the second half to build a 12-point lead over the first few minutes. Thermopolis was unable to capture any momentum as the Panthers led 43-33 going into the fourth quarter and finished the game with a 65-48 victory.

Heny and the Panthers wanted to face a top 3A team and they got exactly that in Saturday’s championship game, as they traveled  to Worland to face the No. 3-ranked Warriors (10-1).

“I was hoping we would be able to play Worland this weekend so the kids knew what to expect when we get them this coming Saturday in conference play,” Heny said. “Playing them in their gym is difficult especially when they have as much talent as they do.”

Powell came out fighting early as they took a 13-8 lead over the defending state champs after five minutes. However, Worland responded with a 12-2 run the rest of the quarter as they attempted to take control of the game on their home floor.

Worland used that momentum and their speed in the second quarter to run past the Panthers and take a 38-22 lead at halftime.

“We learned a lot about how much they use pace to speed up the game and how relentless they are on defense,” Heny said. “It was a good measuring stick to identify the areas that we will need to improve on to compete with the defending champs.”

The second half did not go any easier as Worland continued to grow its lead. The Warriors went on to cruise past the Panthers and walk away with a 77-48 victory.

The Panthers begin northwest quadrant play this weekend as they host Lander at 7 p.m. Friday in an attempt to reach the .500 mark again. Powell will then head back to Worland on Saturday to take on the Warriors at 4 p.m.

“We are just trying to work on developing on both sides of the floor during practice,” Heny said. “We tweaked a few things offensively to help with our spacing and continue to work on our team defense. We still have some more work to do, but we did see a lot of improvements over the weekend.”