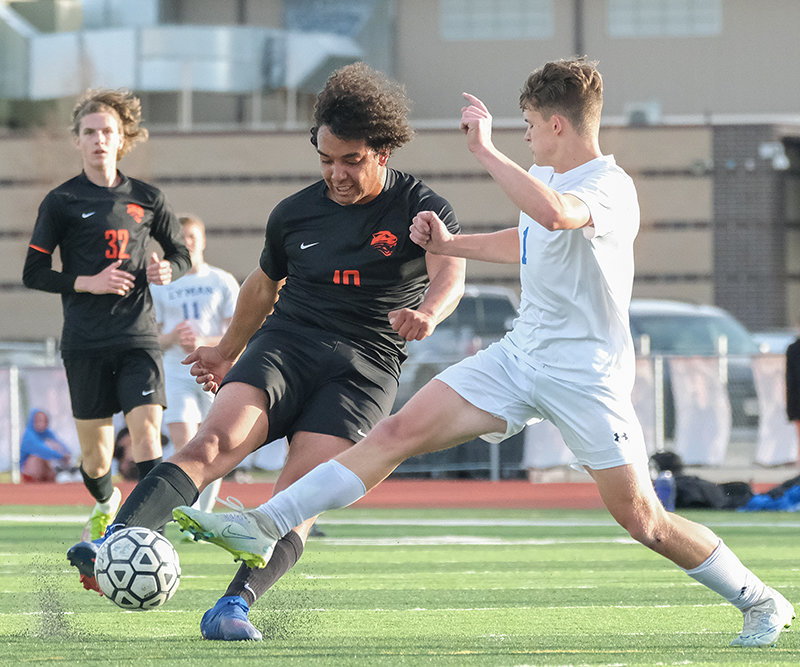 Helping contribute to a dominant weekend, PHS senior Kaleb Brown (center) pushed the pace up the right wing — swinging the ball to his teammates as the Panthers cruised to a 12-1 victory over Lyman on Thursday and a 14-0 victory over Mountain View on Friday.
Tribune photo by Seth Romsa 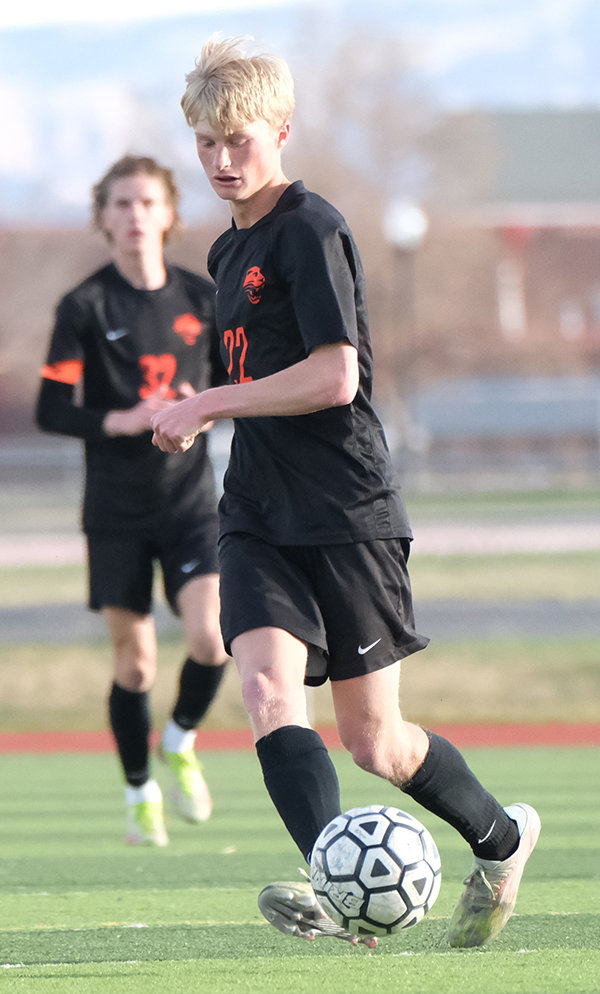 Playing in a more forward role, PHS sophomore Chance Franks sparked the Panther offense as he scored eight goals and added five assists in the victories over Lyman and Mountain View. Powell heads to Worland on Thursday to take on the No. 1 ranked Warriors in the final game of the regular season.
Tribune photo by Seth Romsa
Previous Next
Posted Tuesday, May 10, 2022 8:10 am
By Seth Romsa

After a difficult stretch dealing with weather and long road trips, the Panther boys’ soccer team took advantage of good weather in two final home games — coasting to victories over Lyman 12-1 on Thursday and 14-0 over Mountain View Friday.

Less than two minutes into the game, Sweeney found the back of the net as the Panthers took control of the match from the opening kickoff.

“Senior night is always a little bittersweet as I am happy to celebrate the guys graduating but also know that I will miss their experience and leadership,” Panther Boys Soccer Coach David Gilliatt said. “This graduating class is especially tough as these are the guys I have been working with since I started coaching at the high school.”

Four minutes after the first score, sophomore Chance Franks made it two after a shot outside the box found the top corner.

Just over five minutes later Sweeney got his second, as his kick under the wall on a free kick found the bottom corner making it 3-0 just 11 minutes into the game.

Powell continued to find the back of the net throughout the first half, as they made it seven just before halftime.

After the Panthers extended the lead to 11 midway through the second half, Lyman got its goal after a bad back pass turned into a strong shot to make the contest 11-1.

Powell added one more goal over the final 18 minutes with backup players — in order to get experience and rest before the second game on Friday.

Sweeney finished with four goals and fellow senior Keaton Rowton added a hat trick to make his goal total 20 on the season through the contest.

Franks finished with five assists for the Panthers.

Just like Thursday, the Panthers started scoring early and often.

Just 1:30 into the game Franks found the back of the net on a finish from the top of the box after a corner kick.

It didn’t take long for Sweeney to find his second, as he made it 3-0 just 12 minutes into the game. Shortly after his second goal, he completed his hat trick to make it 4-0.

Again the Panthers continued to keep the pace and score often, as they took a 9-0 lead into halftime.

Midway through the first half Gilliatt started subbing out his starters in order to get more experience for his bench players as the state tournament is quickly approaching.

“Great to get some good looks at our substitutes and give them more time to build their confidence,” Gilliatt said. “Going into the state tournament, we hope to be able to rotate players to preserve energy, as it’s potentially three games in three days.”

Powell continued the strong play into the second half, as the seniors were sent off in style in their final home game with a 14-0 victory.

Sophomore Parker Williams got his first two goals of the season after he was inserted into the starting lineup.

The Panthers go on the road for the final game of the regular season, as they head to Worland on Thursday to take on the No. 1 ranked Warriors (12-0-1 overall, 7-0-1 3A West).

Gilliatt is anticipating a strong matchup, as the Panthers head into the game with a fully healthy and rested team. The past two contests with Worland Powell played with exhausted and injured players.

“Our focus will be to control everything that we can control and play for the win,” Gilliatt said. “My guys are very focused and motivated right now so I will do everything in my power to organize them to their strengths.”

Should the match have a victor, the winning team captures the 3A West title and the No. 1 seed at the state tournament next week. If the match ends in another draw, the No. 1 seed and title come down to tiebreakers because the teams would have identical records, with neither team defeating the other in conference play.