Powell High School volleyball opened the 2020 campaign on the right foot. The Panthers cruised to a three-set win over Riverton on Friday to start the new season 1-0. The Powell girls took the first … 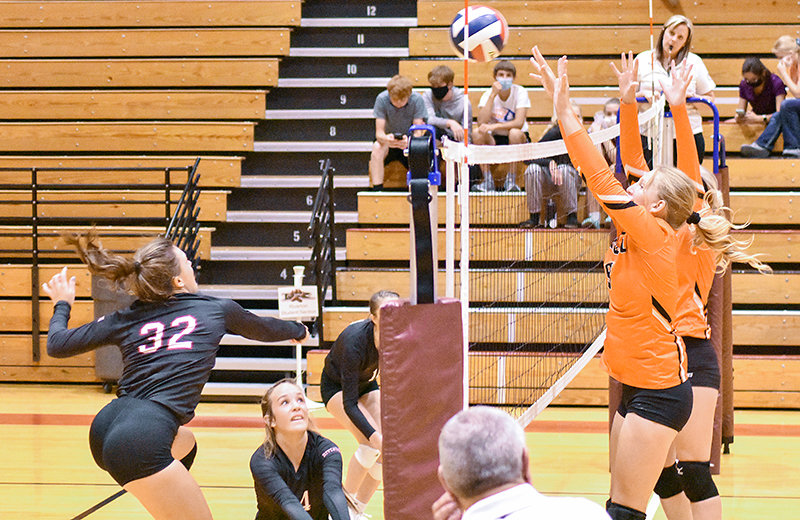 PHS senior Rose Graft (right) goes up for a block against Riverton on Friday. The Panthers opened the 2020 campaign with a three-set win.
Photo courtesy Randy Tucker, Riverton Ranger
Posted Tuesday, September 1, 2020 8:15 am
By Carson Field

Powell High School volleyball opened the 2020 campaign on the right foot. The Panthers cruised to a three-set win over Riverton on Friday to start the new season 1-0. The Powell girls took the first set 25-21, the second 25-14 and the third by a score of 25-21.

In an all-around strong performance, the team’s cohesion stood out.

“I was impressed with how well they worked together as a team and maintained that fire and energy that we needed for a win,” head coach Tasha Miller said.

Individually, senior Rose Graft led the team in kills with 14, and freshman Kenzie Radcliff followed behind with 10. Graft and fellow senior Madi Fields led the team in service aces with two apiece.

Addy Thorington, a freshman, logged a team-high three blocks, with Graft also recording two. In digs, sophomore Maddie Campbell led the way with 18, and Radcliff had the second most with 13.

“We have a few freshmen and sophomores that have never played with these seniors and juniors and I don’t think you would have known there was such a mixture of ages out there,” Miller said of the Panthers’ performance in Riverton. “Our seniors have really stepped up and supported these young ones coming up, and I know from experience that that is not always an easy thing to do.”

If nothing else, Miller hopes the strong opening performance gives the squad confidence early in the season.

“I think it’s always good to get that first game out of the way, especially this year where we don’t have any tournaments to help find out what rotations work best,” Miller said. “I think it’s a great confidence boost to win, but we know we still have a lot to improve on for the rest of the season and I’m very excited to see the progress these girls will make.”

Now 1-0, the Panthers will play their first home match on Thursday against Cody. The varsity game is set to start at 6 p.m. in the Panther Gym.

On Saturday, the PHS squad will head over the Bighorns to Buffalo, facing the hosting Bison at 3 p.m. and then taking on Wheatland at 5 p.m.