After just three days of practice the Powell Panthers golf team ran into a difficult home tournament on Thursday and Friday, helping establish a baseline for the upcoming season. 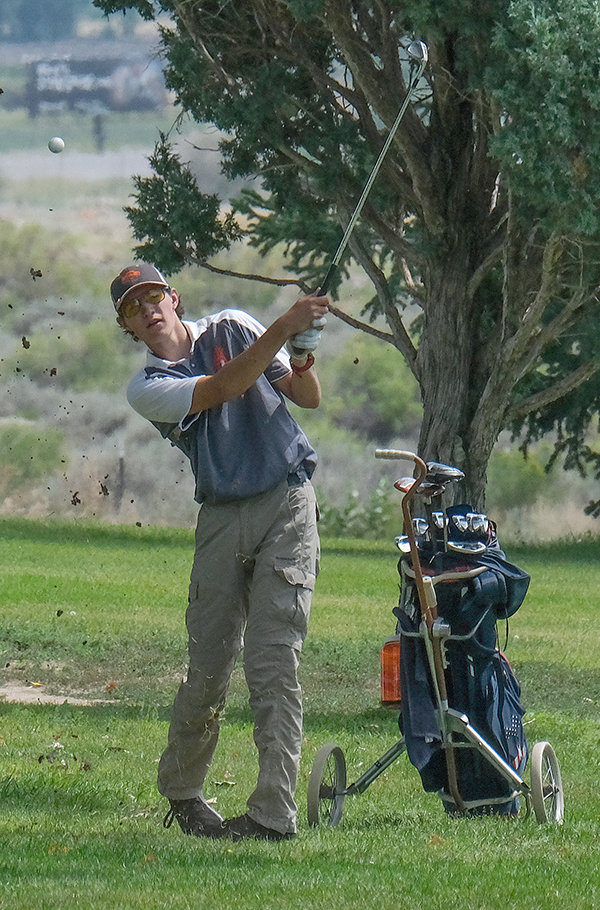 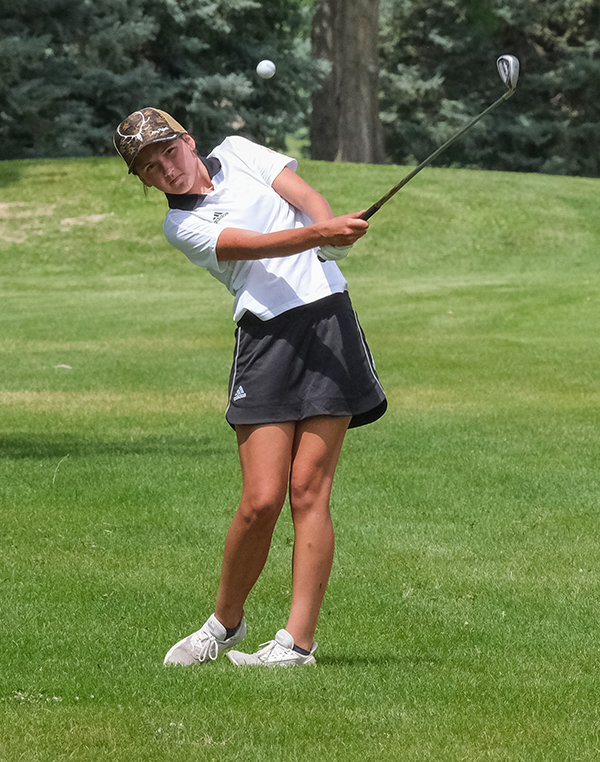 Freshman Coy Erickson lays up an approach during her first ever competition for the Powell Panthers golf team on Thursday.
Tribune photo by Seth Romsa
Previous Next
Posted Tuesday, August 16, 2022 8:20 am
By Seth Romsa

After just three days of practice the Powell Panthers golf team ran into a difficult home tournament on Thursday and Friday, helping establish a baseline for the upcoming season.

Junior Gunnar Erickson started where he finished the 2021 season, leading the Panthers with a 92 on the first day and an 89 on the second day.

“This is a solid start for him, but I really expect him to be around 85 soon and just keep improving from there,” Panther golf coach Troy Hildebrand said. “Gunnar has been steadily improving since the first round of his freshman year which is exciting to see.”

Just behind Erickson was fellow junior Will Jackson, who finished with a 91 on the first day and a 93 on the second day.

Hildebrand said that Jackson battled for a spot last year for the state team, but picked up in the fall playing his best golf of his career so far.

He said that Jackson is good at taking tips and suggestions to incorporate into his game, and that this start will give him a boost of confidence to start the season.

Another junior rounded out the top three for Powell when Parker Williams finished with a 94 and a 92 over both days respectively.

“Parker [Williams] had been able to get in a few tournaments during his freshman and sophomore years, but this is easily his best two scores to date,” Hildebrand said. “These scores are a great start to his junior year and he will be battling for a varsity spot all year by the looks of things.”

Hildebrand said that the 88 for Siebert was a career best on Thursday, but he had a few struggles on Friday that led to a 101. He said that despite those struggles this was the best two-day total for Siebert in his career.

Another junior, Andrew Jones, finished with a 97 both days of the competition.

“Andrew [Jones] had an eagle and a couple of birdies over the two days, but he was never able to really get either round going in a consistent, positive way,” Hildebrand said. “He has a lot of tournament experience and has a lot of golf talent so I know that his best golf this year is ahead of him.”

Junior Isaiah Woyak finished with a 94 and a 101 to start out his season.

Woyak has been a varsity contributor for two years, and continues to be in the mix for a varsity position.

Hildebrand said that his scores were a good starting point for the season, and that Woyak has already identified some areas he wants to focus on — something he enjoyed hearing as a coach.

Sophomore Trey Scott rounded out varsity play for Powell, shooting a 91 on the first day but was forced to withdraw due to an injury after four holes on the second day.

“I hope he is able to get healthy and bounce back soon as he will be an important part of our team this fall,” Hildebrand said. “He played a ton of golf this summer and I want him to get to see the benefits from those efforts.”

Freshman Coy Erickson started out her first tournament with a round of 122 followed by a 138.

Erickson finished with a 54 on the front nine on Thursday, where she settled into a groove early and played well, according to Hildebrand.

“She is a very good athlete and she will improve very quickly as she gets more time and experience in tournament settings,” Hildebrand said.

Since the Panthers were the hosts, Hildebrand was able to get more athletes time on the course, playing seven additional Powell golfers.

Each of these golfers was given one day, with senior Jeff McFarland leading the way on Thursday with a 112.

Overall the Panthers finished in fifth place with a 741, and Lovell won the boys team score with a 691. Cody walked away with the girls team title with a 609 compared to Lovell’s 626.

The quick season for the Panthers swings back into action Tuesday (today) heading to Cody.

Cody’s tournament kicks off at 10 a.m. Tuesday and Wednesday, before the Panthers take the rest of this week off.