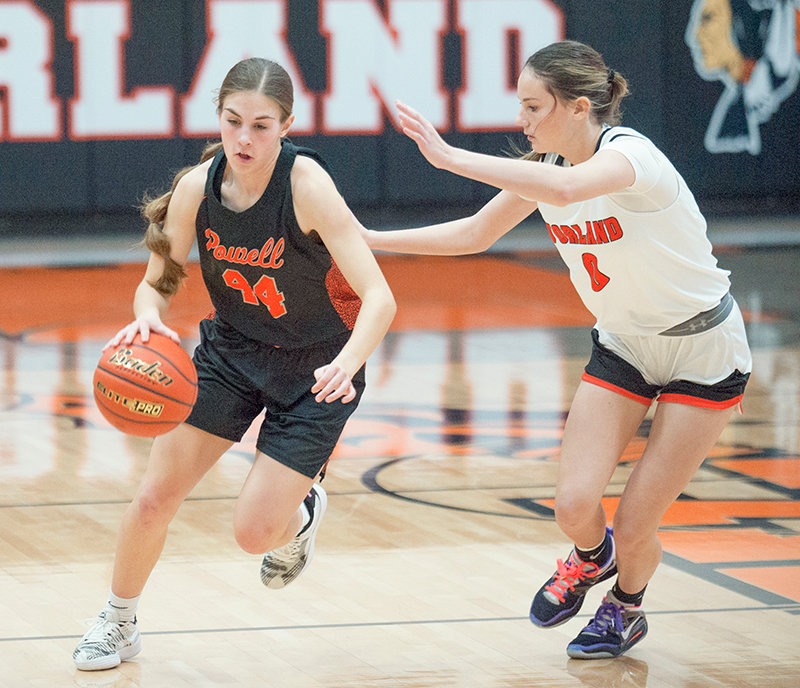 Megan Jacobsen and the Panther girls’ basketball team got off to a 2-0 start in conference play after victories over Thermopolis and Worland last weekend.
Photo courtesy Alex Kuhn, Northern Wyoming News 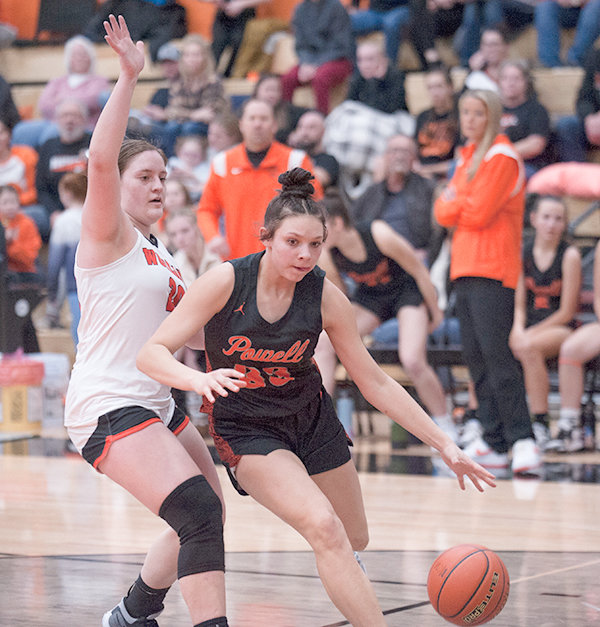 For the first time in five years the Powell Panther girls’ basketball team opened conference play 2-0 — winning on the road Friday against Thermopolis 58-32 and Worland 54-35 on Saturday.

Heading back to Thermopolis, the Panthers (6-5 overall, 2-0 3A Northwest) opened up 3A Northwest conference play against a familiar opponent in the Bobcats (2-10 overall, 0-1 3A Northwest) who Powell defeated 57-19 last weekend at the Big Horn Basin Classic.

Unlike the previous weekend the Panthers did not get off to a 31-0 start over the Bobcats, with neither team scoring effectively early in a 5-5 tie game.

“They had a different press breaker,” coach Chelsea Buher said. “Once we figured it out we were able to get more steals.”

Powell ended the first quarter with a 9-0 run to create separation between the Panthers and the hosts.

Powell pushed the lead out to 26-11 in the second quarter, before a buzzer-beater by Thermopolis made it 26-14 at halftime.

The game stayed between 10 and 15 points in the third quarter, before the Panthers pushed it over 20 early in the fourth quarter and didn’t look back.

Powell shot 48% from the field as a team, and finished with a season low 13 turnovers.

Maddie Campbell led the Panthers with 17 points on 58% shooting, alongside Addy Thorington (12) and Coy Erickson (11) as the other two scorers in double-figures.

Early on shots were not falling for either team, as a scoreless game ensued over the first three minutes.

Worland got things started and took a 6-3 lead before a timeout by Buher.

“I told them we were better than what we were showing,” she said. “We adjusted the game plan a little bit. We hadn’t played zone that much this year and I think that caught them off guard.”

The Warriors pushed the lead further to 8-3, but Powell ended the quarter on a 17-4 run, jump-started by Campbell, who hit a jumper with 4:08 remaining and also hit a pair of threes to spark a 20-11 lead after the first quarter.

In the second quarter Powell continued to maintain its lead, and took a 31-22 lead into the locker room.

“Maddie ended with 14 in the first half,” Buher said. “That’s what we need, not only Maddie to score like that, but somebody to knock down shots when we need them to get us going.”

Worland cut the lead to seven to start the third quarter, but the Panther press alongside calm decision making never allowed the Warriors to get closer.

Powell took a 43-26 lead heading into the fourth quarter, and finished with a 54-35 decision — only giving up 13 points the whole second half.

Powell now returns home for a five game homestand starting on Thursday at 5:30 p.m., in a key early season matchup against Lovell (9-4 overall, 1-0 3A Northwest) for early control of the 3A Northwest.

Lovell defeated Powell in the first matchup of the season, beating the Panthers 44-24 in the BHB Classic championship.

“The first showing was one of our worst games that we have played and the girls would be the first to agree with that,” Buher said. “They are a physical team and we are going to have to bring that physicality and more confidence.”

The Panthers will hope to improve from their first game against Cody on Jan. 3 when Powell committed 32 turnovers and lost 55-13.

Total rebounds then offensive rebounds in ()