Another slow start on the road Friday had the Powell football team searching for answers. The Panthers found them, winning their first conference game against Green River 26-14 by scoring 26 … 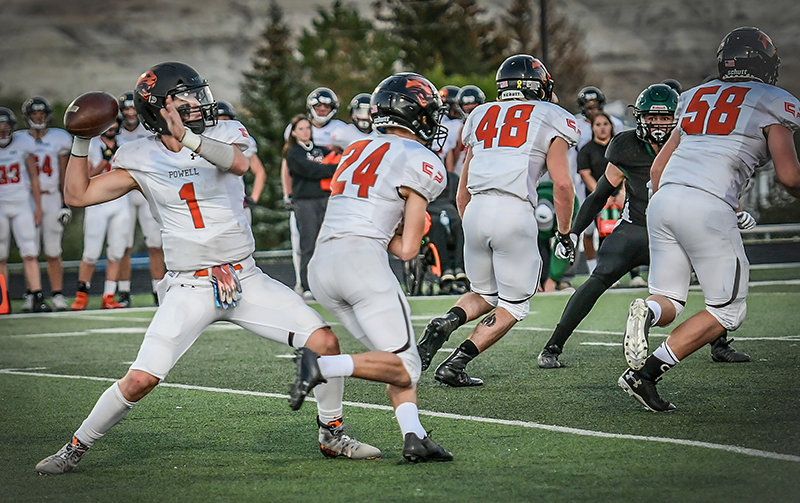 Jett Schwahn goes back for a pass during the Panthers game against Green River on Friday. Schwahn finished 15-21 with two touchdown passes in the victory.
Photo courtesy Stephanie Peterson
Posted Tuesday, September 27, 2022 8:10 am
By Seth Romsa

Another slow start on the road Friday had the Powell football team searching for answers. The Panthers found them, winning their first conference game against Green River 26-14 by scoring 26 consecutive points following an early deficit.

The Wolves (1-4 overall, 0-1 3A West) got things started early, putting together a strong initial drive against the Powell (3-2 overall, 1-0 3A West) defense.

The eight-play drive spanned 58 yards, put together primarily behind a strong running attack.

“Up front they were high pads and were getting underneath our guys and driving them,” coach Chase Kistler said.

Seven plays were runs, including the final play that covered 20 yards and gave Green River the 8-0 lead after a two-point conversion.

Green River gathered even more momentum when a short kick bounced around and was recovered by the Wolves to give them the ball back right away.

“We looked shocked they kicked an onside even though we said they squib kicked it pretty much every time they kicked off,” Kistler said. “Going into a game it feels like they have to get a feel for their opponent before they decide they can play with these guys.”

After a punt, Powell finally got the ball on offense, but a 12-play drive was stopped when a Jhett Schwahn pass was intercepted to give Green River the ball back.

Powell finally got on the board in the second quarter, when Case Bradish punched the ball in on a 2-yard run to make it 8-7.

The Panthers got the ball back just before the half, and a quick drive on four pass plays went 46 yards. The drive was capped off on a play from Schwahn to Trey Stenerson for 32 yards to make it 13-8 after a missed PAT going into the half.

“We had Trey, [Nathan] Feller and Alex Jordan all catching the ball, and spreading the ball out opens up our run game underneath,” Kistler said. “As long as we are making those short catches we are good, the past couple weeks we have struggled catching the ball. This week they tried to focus on the run but we spread them out with our pass then got the run game going.”

Coming out of the half Powell carried that momentum, putting together a strong drive out of the locker room.

The Panthers ran seven plays spanning 62 yards, with six running plays capped off by Steven Stambaugh rushing in from 4 yards out.

Another failed PAT kept the score at 19-8.

A quick three-and-out by Green River gave Powell the ball back in a short field after a bad punt, and the Panthers capitalized.

Another pass from Schwahn to Stenerson covered 20 yards to find the end zone and make it 26-8 Powell.

Green River got its second score of the game at the start of the fourth quarter, when a screen pass went unrecognized by the Panther defense and found the end zone from 34-yards out to cut the lead to 26-14.

The Wolves put together another strong attack late in the fourth, but a stop by the Panther defense sealed the victory.

Bradish led the way for the Panthers on the ground, finishing with 143 yards on 27 attempts with one touchdown. Stenerson finished with 10 catches for 127 yards and two touchdowns.

Powell returns home this week for a difficult homecoming game, matching up with No. 2-ranked Star Valley (4-1 overall, 1-0 3A West).

“They are big up front, are physical and are always well coached,” Kistler said.

He said he hopes his team will continue to get better at what they do, and the team will keep their focus on the game at hand despite all the activities and celebrations during homecoming week.

That matchup is scheduled for a 5 p.m. kickoff at Panther Stadium.