Panther cross country has best meet of the season

The competition had a slightly different format, as …

Panther cross country has best meet of the season 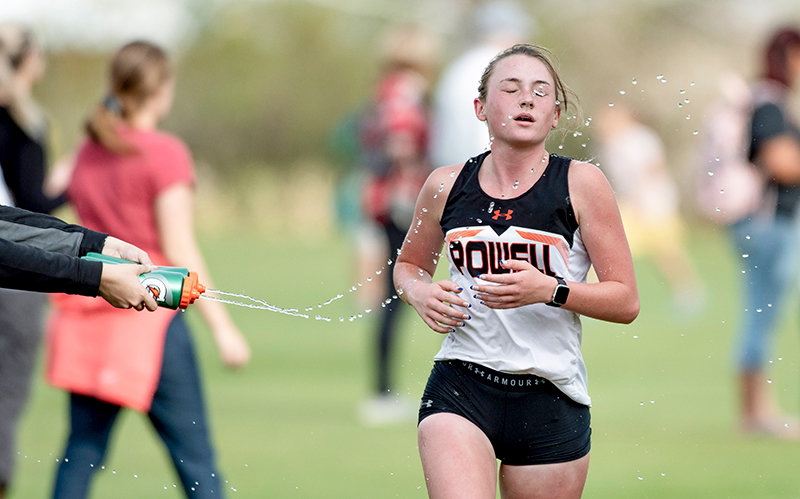 Kinley Cooley is sprayed with water during Friday’s Foxes and Hounds cross country meet in Cody. She continued her red hot running, setting a personal best time of 20:47 and finishing in ninth place.
Tribune photo by Mark Davis 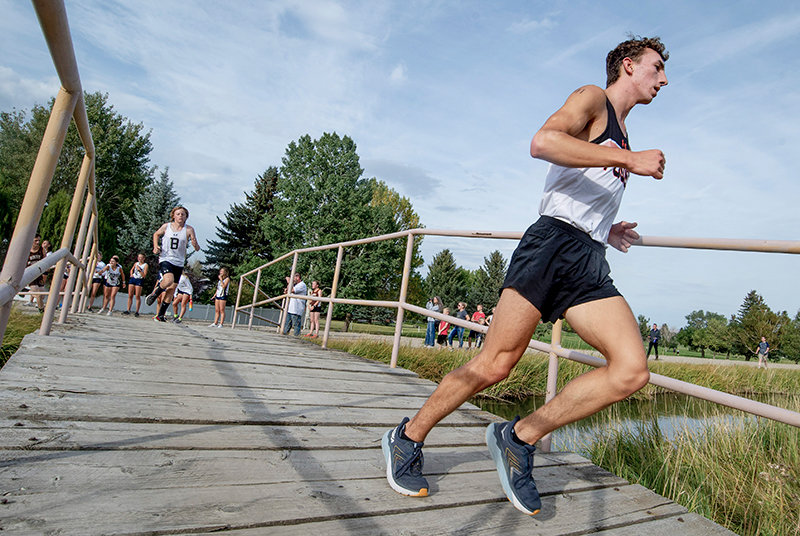 Ben Whitlock crosses a bridge at the Olive Glenn Golf Course in Cody en route to finishing as the third Panther runner with a personal best time of 19:04.
Tribune photo by Mark Davis
Previous Next
Posted Tuesday, September 28, 2021 8:05 am
By Seth Romsa

The competition had a slightly different format, as the junior varsity runners began the race, with varsity athletes sent out in different groups from slowest to fastest as they attempted to chase the rest of the pack.

The Lady Panthers finished third overall as a team for the meet, with Cody finishing first. The team finished fifth overall, with Buffalo winning the meet.

The Panther girls were once again led by freshman Kinley Cooley who ran a personal record (PR) 20:47, placing ninth overall, while the guys were again led by Riley Schiller who took 13th with a time of 18:30.

“Our girls team had a fantastic day with all of our girls running a personal best time, a season best time or just missing by seconds,” Powell High School head coach Ashley Hildebrand said.

Kabrie Cannon was just behind Cooley as she ran a time of 21:26 to finish in 10th place.

Freshman Salem Brown continued her massive improvement, shaving another two minutes off from her previous best from last week, running a 23:48 for 26th place.

“She is really starting to figure out how to race and it is going to be fun to watch her progress,” Hildebrand said of Brown.

Gabby Thomas ran a season best of 24:09 for the Panthers, coming in 30th place.

Gracie Wolff ran a PR of 24:50. She had a goal of breaking 25 minutes this week; beating the mark by 10 seconds was an impressive accomplishment, Hildebrand said.

On the boys’ team, Daniel Merritt  finished just behind Schiller in 18:38, taking 16th overall despite fighting a cold and being unable to find another gear.

Ben Whitlock was the third runner for the Panthers to cross the line, finishing in a PR time of 19:04 and coming in 28th place.

“I look for him to break into the 18s very soon,” Hildebrand said.

Breckin Streeter was fourth for the Panthers, finishing 33rd with a time of 19:39.

Freshman Liam Taylor was the fifth runner for the team, finishing with a big PR of 20:20 in 39th place.

“Liam [Taylor] missed a few meets because of injury and quarantine, but he is really coming on right now and I believe, with his work ethic, he will continue to improve,” Hildebrand said.

Colton Decker came in 41st with a PR of 20:27. Hildebrand said they talked with Decker all week about what his mile splits needed to be to break 20:30 and he achieved those goals.

Justin Hobbs finished just behind Decker in 42nd, with a time of 20:34.

Paul Cox was 2 seconds off of his personal best running a 26:12.

Hildebrand said the boys are missing a few runners due to quarantine and illness, but is hoping they will be back to full strength on Thursday, when the team heads to Worland.

“Coach [Tracy] McArthur and I are very happy with how our runners are performing at this point in the season and how our younger runners are becoming more aggressive and learning how to race,” Hildebrand said. “Worland has a very nice course and our kids love to run there.”