After two successful seasons at Snow College in Utah in which her team reached the national tournament, Megan Pannell made the decision to reach out to Trapper coach Scott Keister to try and transfer … 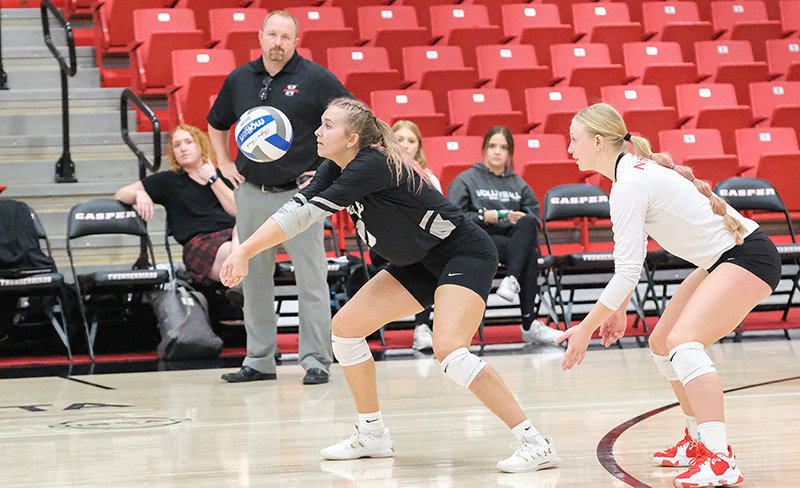 Megan Pannell (middle) bumps a ball during the Trappers first round matchup at the Region IX Tournament. She made the transfer to Northwest from Snow College and earned First Team All-Region IX honors in her only season for the Trappers.
Tribune photo by Seth Romsa

After two successful seasons at Snow College in Utah in which her team reached the national tournament, Megan Pannell made the decision to reach out to Trapper coach Scott Keister to try and transfer and play at Northwest for her extra Covid year.

“I told [Keister] how grateful I was over and over,” Pannell said. “I could not tell him enough that it really meant the world to me — it was a risk because he didn’t know me but I was grateful he was willing to take that risk.”

Each player who participated during the 2020 season was granted a free year of eligibility that would not count towards the two eligible years in the NJCAA and the four years in NCAA.

Pannell made the choice to try and attend Northwest after her sister, Kim Pannell, was recruited to the team and signed.

“I loved playing with my sister,” Megan Pannell said. “It was a lot different than high school where you expect to play together because in college you have to work for your spot. There are other really good girls trying to get your spot, so being able to play together and to know that if the ball got set to her she was going to destroy it. I loved that aspect, but I also trusted my teammates to put the ball away anywhere.”

Following the decision to come to Powell and play with her sister, Pannell was rewarded with first team Region IX North honors after a strong sophomore campaign.

In her one season with the Trappers, Pannell finished with 318 kills on a .212 kill percentage for Northwest as an outside hitter.

“I loved it,” Pannell said. “Past experiences I didn’t get to play as much as I wanted. Coming here and getting that opportunity meant a lot and I am grateful to coach [Keister] for giving me a shot. I loved that aspect because it meant I fulfilled my college dream to play on the court with my sister and with these awesome girls.”

She is hoping to continue her career at a four-year college, but has not made a decision at this time.

Another sophomore earning postseason honors for the Trappers was Sidney Parker, who finished second team.

Parker shifted between a middle blocker and outside hitter for the Trappers, wracking up 241 kills alongside 108 total blocks on the season.

Her 108 blocks were the 28th most in the nation and her average of .98 blocks a set had her sitting at 36th in the nation.

The first of two NWC freshmen earning second team honors was libero Ellie Thomas, who finished the season with 451 digs to place her 40th in the country. Her average of 4.10 digs a set placed her 48th.

Thomas also contributed in the service game, averaging .49 aces a set to place her 42nd — with her 54 aces being good enough to earn her 35th overall for the season.

The second freshman named to the second team was middle blocker Jocelyn Sanders.

She also finished with 142 kills on the season.

“It was fun to be able to have this experience,” Pannell said. “We had a lot of injuries, and we went through so many injuries. To be able to get through all the hard stuff and come together as a team was so fun.”

The Trappers finished with more than 20 wins for the second consecutive season, but were knocked out after two losses at the Region IX tournament earlier this month.