Hitting the hardwood one last time as a duo, Zach Ratcliff and Toran Graham went out on top helping the Wyoming Coaches Association (WCA) North All-Star team win the All-Star game 96-69 on July 23 in … 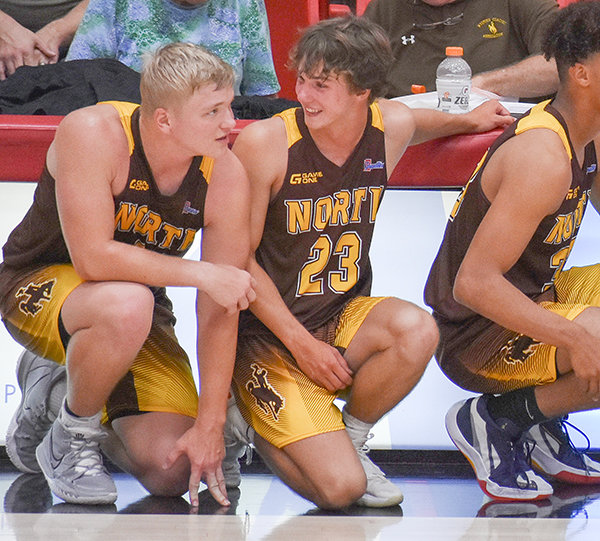 Toran Graham (left) and Zach Ratcliff share a moment on the sideline while waiting to check into the Wyoming Coaches Association All-Star game on July 23.
Photo courtesy Shelly Ratcliff
Posted Tuesday, August 2, 2022 8:10 am
By Seth Romsa

Hitting the hardwood one last time as a duo, Zach Ratcliff and Toran Graham went out on top helping the Wyoming Coaches Association (WCA) North All-Star team win the All-Star game 96-69 on July 23 in Casper.

“It was awesome that we were both able to be selected for the All-Star team,” Graham said. “I think Coach [Mike] Heny had a big part of our selection. He is an amazing coach and did everything he could to get us back on the court together one last time.”

This was the second postseason honor that the pair has garnered, after they were both selected to play for the North team in the Shrine Bowl in June.

“The week was structured similarly to the Shrine Bowl week,” Ratcliff said. “We had multiple practices a day and were fed more food than we could handle. This week also focused on beating the South.”

The week for the pair started on July 20 and included multiple visits to various charitable organizations in Casper.

“It was another heartwarming experience,” Ratcliff said. “We visited the Boys and Girls Club in Casper to play with all the kids there that day. Seeing the kids’ faces light up when we got there was pretty amazing.”

Both players appreciated the opportunity to visit the kids in Casper, calling the experience humbling. They said it gave them a deeper understanding of how lucky they are to be athletes.

Graham said he went into the event uncertain if he was going to get along with all of the players on the North team due to having played against them and rivalries, but he realized that sometimes competition brings out the worst in athletes. He quickly became friends with everybody.

Graham said that knowing someone else on the North team made things easier for him.

“Being able to end my high school career with a win was amazing within itself, but being able to have a life-long friend and fellow teammate on the court/field with me for both the Shrine Bowl and the All-Star game made it so much more rewarding,” he said.

The pair now head off to college, bringing an end to two strong Panther athletic careers.

“It was a blessing,” Ratcliff said. “Toran and I have been together for almost every single sporting event for the last two years. We have made so many memories together, and I will always have an amazing friend in him.”