With a recent merger, a new building currently under remodel and new positions available, One Health’s Powell branch has been busy.

One Health’s planned move to the Fitch Building is … 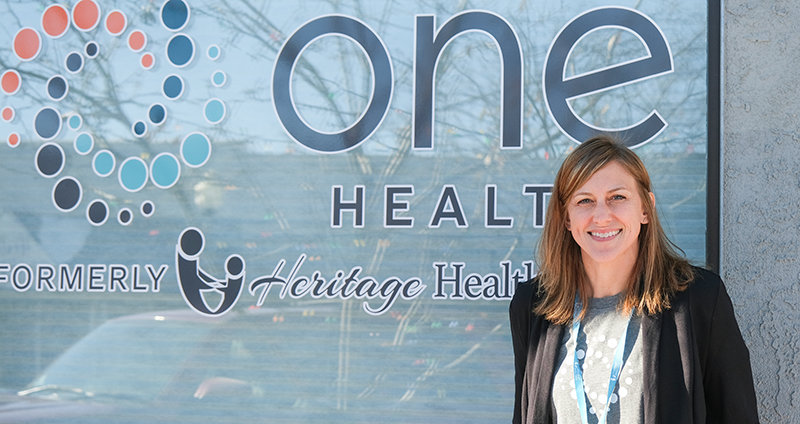 Chief Financial Officer Colette Mild stands in front of One Health’s administrative office on Bent Street in Powell. One Health is currently in the design stages of its soon to be office at the Fitch Building.
Tribune photo by Braden Schiller
Posted Friday, December 2, 2022 8:20 am
By Braden Schiller

With a recent merger, a new building currently under remodel and new positions available, One Health’s Powell branch has been busy.

One Health’s planned move to the Fitch Building is still underway with project completion expected in or after 2024. The Fitch Building on East Seventh Street in Powell was formerly a satellite office for the credit ratings agency Fitch Information Services. According to chief financial officer Colette Mild, the remodel of the building is currently entering the design stages. The hope for the new building is services will be able to exist under one roof, with patient care being able to be carried out in a more efficient manner. A dental suite will also be added to the building, as well as a potential drive-thru addition that would allow patients to be seen via the drive-thru.

Currently, One Health has submitted an application to the State Lands and Investment Board for funding, but if this is unsuccessful other funding avenues may be pursued.

For now One Health’s Powell offices are located in three buildings on Bent Street.

“I feel like we have really gotten a reputation in the community for putting patients first and we’ve done that regardless of the facility we have and so to be able to provide a state of the art facility for our staff and our patients just changes the dynamic,” Mild said. “Even walking into the door changes things, but really it creates efficiencies. Right now we’re a really elongated clinic.”

Mild explained that in most clinics there is a “flow” meaning that patients will enter and leave the building without being crowded or congested. In the current office which spans three buildings on Bent St., two side-by-side with one separated from the others, this can be difficult to do. With the Fitch Building, One Health aims to create an office that is efficient and comfortable for patients while still offering the same level of service.

But moving to the Fitch Building does not mean that One Health won’t have a presence downtown. Mild said they would like to keep leasing one of the buildings on Bent Street as an administrative office to maintain a downtown presence.

Outside of the building renovations, One Health is roughly six months into its merger with Heritage Health Center, which originally held the offices on Bent Street.

“The merger has run smoothly so far, I believe that the building will allow us to provide even more services for our community in a relaxing environment,” family nurse practitioner Julie Agee said.

Mild said One Health has recently completed two other building remodels and the support in the current project has been “phenomenal.” She said day-to-day operations have remained largely unchanged since the merger and both entities have brought things to the table.

“It’s really nice to be able to tap into that expertise from other folks that are preventing rural health in other areas and be able to bring that to Powell and vice versa,” Mild said.

Mild added that sliding pay fees for patients actually went down following the merger with One Health. Some patients can be seen by a physician with a $0 copay which makes it much easier to afford medical services.

Service will be further improved with the addition of several new positions, including a human resources manager.

Mild said the patient resources position will be an important supplement to medical care. The position will help patients get proper nutrition, help them with medication and offer other support. Psych Director Ashley Jarrett said that this has always been done at One Health but a dedicated position for this support services has not existed, these services have always been carried out by nurses in addition to their official duties. Other positions currently open for hire at One Health are a medical doctor, a physician assistant or family nurse practitioner, behavioral health counselors and care manager and a informational technologies support person.