Hope to recapture momentum on road

The Northwest College women’s basketball team went on one of its longest road trips of the season over the weekend, taking part in the Salt Lake Community College Bruin Classic …

Hope to recapture momentum on road 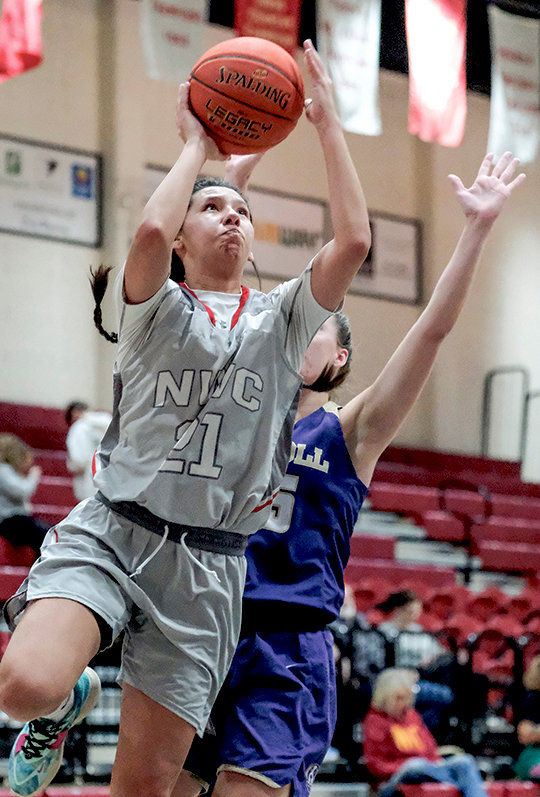 Nayeli Acosta finishes with the right hand past a Carroll College defender. The Trappers are hoping to end their first multi-game skid this weekend in Nebraska.
Tribune photo by Seth Romsa 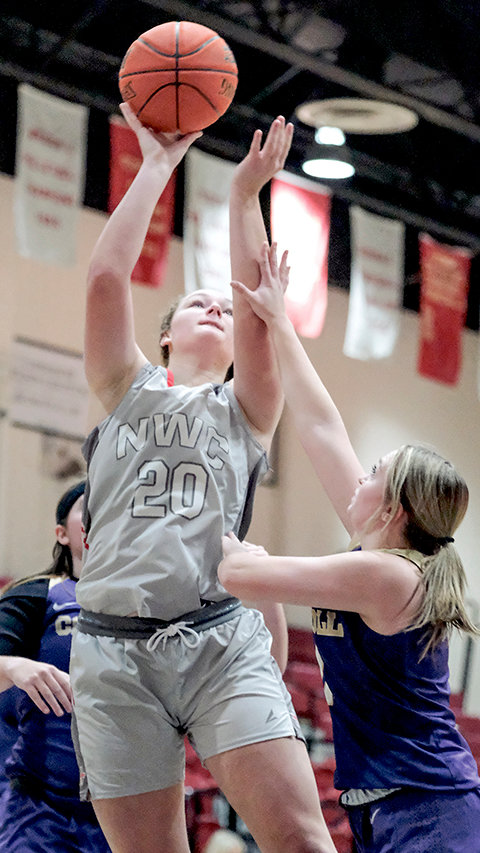 Natalyah Nead rises up over a Carroll College defender during a home contest in November. The Trappers head out on the road one more time before coming home next Thursday and Friday.
Tribune photo by Seth Romsa
Previous Next
Posted Thursday, December 8, 2022 9:24 am
By Seth Romsa

The Northwest College women’s basketball team went on one of its longest road trips of the season over the weekend, taking part in the Salt Lake Community College Bruin Classic Thursday-Friday.

Without leading scorer Darla Hernandez (17.5 points per game) the Trappers stumbled, defeating the All-Stars 65-54 on Thursday, before losing to No. 9-ranked SLCC 70-50 on Friday and Colorado Northwestern 85-76 on Saturday.

Starting out the classic, the Trappers (9-4) came up against an All-Star team with the hopes of extending their winning streak out to three games.

Both teams battled in the first quarter, but a late push by Northwest gave the Trappers a 14-11 lead heading into the second quarter.

The All-Stars battled all the way back to trail 29-27, before Northwest took a 34-29 lead into the half.

Northwest was unable to separate immediately in the second half, but pushed the lead out to double digits with 3:37 left in the third quarter.

The Trappers pushed the lead out to as many as 20 in the fourth quarter, and walked away with a 64-54 victory.

Roxanne Rogers led the way with 15 points, followed by Yaiza Vacas-Lopez with 12 and Nayeli Acosta with 11.

Heading into a difficult matchup on Friday, the Trappers tried to capture momentum early against host, No. 9-ranked SLCC (8-0).

The Trappers did just that, keeping the contest close throughout the first quarter but trailed 23-19 heading into the second quarter.

“Against SLCC mentally we were prepared, we came out in the first quarter the best I have ever seen them play,” coach Lauren Davis said. “We got in foul trouble a little bit, SLCC’s size and pace along with their sophomores — I don’t think our freshmen were prepared for that. You can’t grasp the pace and strength with teams like that until you actually play them.”

A difficult second quarter allowed the Bruins to pull away, and push the lead out to 16 at the break 44-28.

Northwest cut the lead down to 10 to start the second half, but was unable to get within single digits and continued to trail 55-41 heading into the fourth quarter.

SLCC was able to finish off the contest with a 70-50 victory. Rogers again led the way with 18 points alongside Acosta as the other double-digit scorer.

After the loss on Friday night, Northwest looked to bounce back on Saturday against Colorado Northwestern (4-5) to complete a season sweep of the Spartans and prevent the first multiple game losing streak of the season.

A tight first quarter continued to be the theme, with Colorado Northwestern holding a 21-16 lead after the first quarter.

“We didn’t come out with the firepower we needed,” Davis said.

An 11-0 run over the first five minutes had the Trappers sitting with a 27-21 lead, but Northwest was unable to pull away after holding a double digit lead and only led 41-36 going into halftime.

Colorado Northwestern recaptured the lead just over midway through the third quarter at 55-52, forcing a timeout from Northwest.

The Spartans held onto the lead and took a 62-57 lead into the fourth quarter.

Northwest was unable to overcome a late double-digit deficit, and dropped a second straight game for the first time this season 85-76.

“Fatigue was a big factor, but we need to find a way to win even with the fatigue,” Davis said.

After the long road trip to Salt Lake the Trappers will regroup and head  to the Western Nebraska Community College Classic on Friday and Saturday.

“I’m excited to see what happens when we are being tested on the road again and if we can turn it around after a couple losses,” Davis said.

The Trappers expect to have Hernandez back in some capacity, but her minutes may be limited depending on her recovery from a knee injury, Davis said.