After grabbing a 1-0 lead over Central Wyoming on April 21, the Northwest College women’s soccer team found itself in a hole. The Trappers allowed two goals in a row to trail 2-1 at … 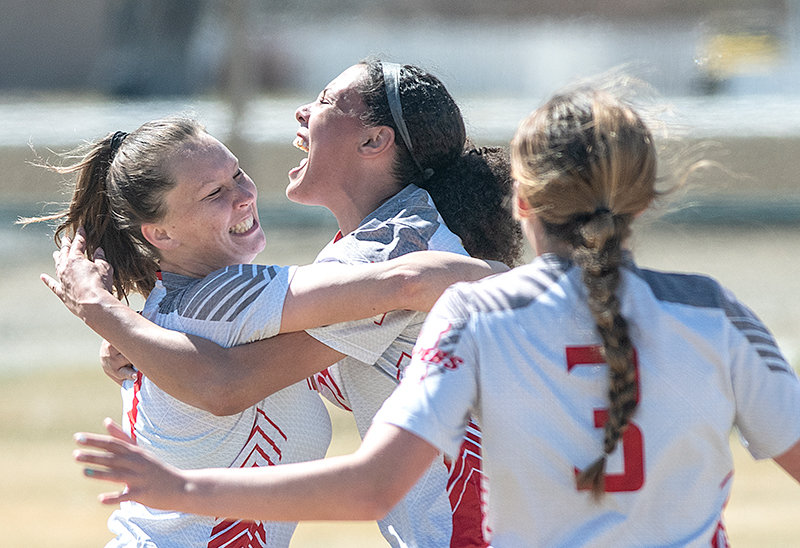 Shyley Hunter, Kierra Cutright and Kindee Lewis celebrate after Hunter scored the go-ahead goal against Central Wyoming on April 21. NWC escaped with the 3-2 win, its first of the year.
Tribune photo by Carson Field 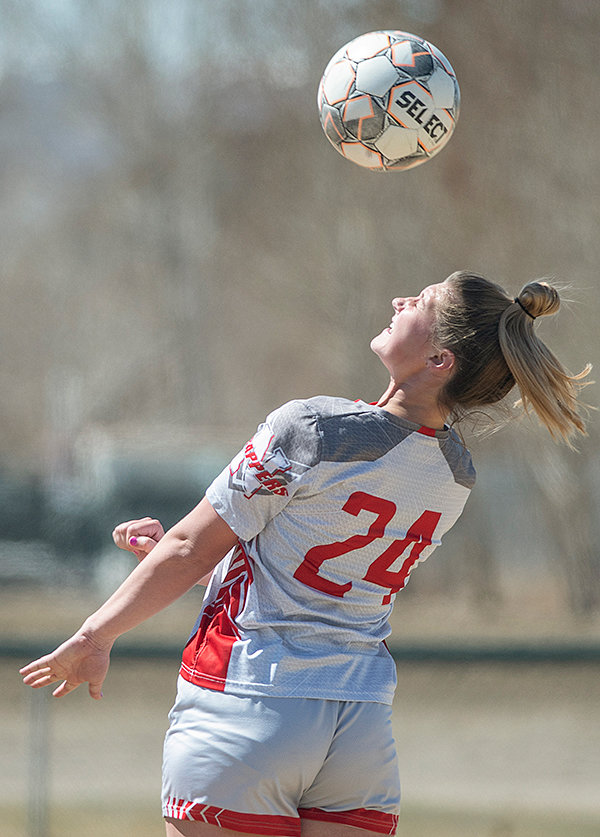 Freshman Kaitlin Castle goes for a header on April 21 against Central Wyoming. While NWC has won just once this year, coach Rob Hill pointed out that the team has progressively improved throughout the season.
Tribune photo by Carson Field
Previous Next
Posted Thursday, April 29, 2021 8:15 am
By Carson Field

After grabbing a 1-0 lead over Central Wyoming on April 21, the Northwest College women’s soccer team found itself in a hole. The Trappers allowed two goals in a row to trail 2-1 at halftime

In danger of losing once again, it would’ve been easy for the team to become discouraged. The opposite happened.

Late in the second half, NWC saw more offensive opportunities, and eventually, that equated to scoring. Shyley Hunter scored two goals in a two-minute span (76th- and 78th-minute), allowing the Trappers to re-take the lead.

“It would’ve been very easy to quit and get down and have the ‘here we go again’ attitude,” Hill said. “The fight in them, to keep going, was brilliant. They just kept persisting and persisting and got the reward.”

The Trappers’ other goal came from Kierra Cutright in the 10th minute on a breakaway, and Larissa Santos had the assist on the early score. NWC posted 17 shots on goal in the win, its highest figure of the season.

At one point, the Trappers didn’t have enough players to field a roster, due to several players leaving the program in the fall and early spring. But now several matches into the 2021 campaign, they have shown significant growth.

“Every game they have character, and I felt like this one was a big improvement,” Hill said.

Their second game of last week, however, was a setback. Northwest ventured to Sterling, Colorado, for a match against Northeastern Junior College, falling 6-0.

NWC was short-staffed in the loss, missing several players due to injuries or family commitments. As a result, the Trappers had just one sub on hand, and when Hunter suffered an injury early on, they had to play with zero subs.

“They competed as well as they could’ve, but it was a tough ask,” the coach said.

Offensive opportunities were hard to come by in the loss, with the Trappers just tallying three shots on goal. With the defeat, NWC’s record moved to 1-6 overall.

With four matches remaining in the regular season, Hill’s focus is keeping the team healthy while continuing to develop as a squad.

“We should be better off this weekend,” he said. “We’re trying to make improvements from game to game. I want to see them keep working and let the chips fall where they may.”